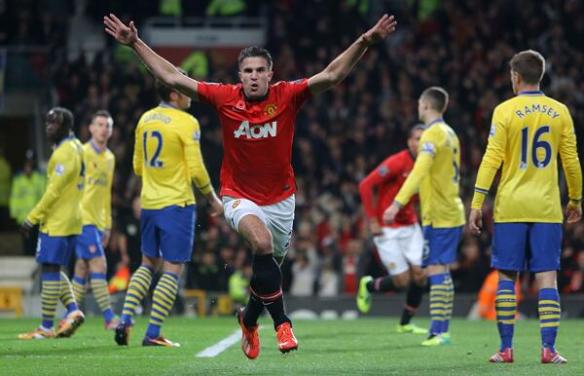 In his latest Editor’s Column, James Dutton surveys the top of the Premier League and tries to make sense of the six-point gap between 1st and 8th…

The third international break of the football season is upon us. This is traditionally the stage where journalists, bloggers and punters share their opinions and observations of the season so far.

In November 2013 though, to make sense of a nascent season that is knocked out of its rhythm week after week is to reckon against its perpetuation. Hindsight makes fools of us all, as those who reveled in Arsenal’s seemingly inevitable demise after their opening-day capitulation against Aston Villa and those who struggled to fathom the Moyesification of Manchester United (guilty) have found out.

That is not to say that Arsenal have both banished their demons of seasons gone by, or been found out by a resurgent Manchester United – who likewise have neither found the cure for their early-season woes or nosedived off a cliff into mediocrity.

Eleven games, a quarter of the season gone and six points separate the top eight. As this neat infographic from the whizzes at Sporting Intelligence show, this has been no ordinary start to a Premier League season… 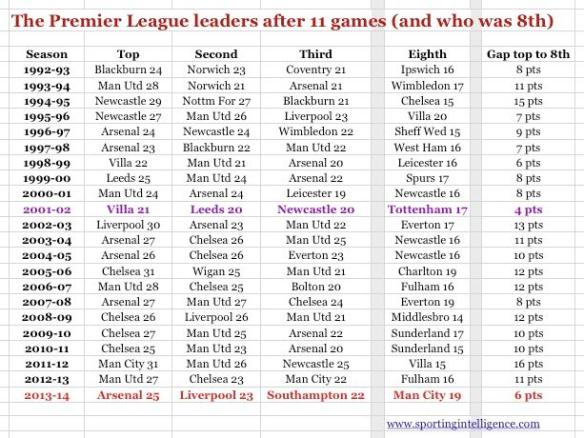 In the post-Ferguson battleground that is the Premier League season 2013-4 there is chaos and carnage. The uncertainty, and the swinging pendulum of momentum and consistency that we witness each week makes sense when viewed in the prism of the summer that has just gone.

Manchester United, Ferguson-less, have lost their aura; Old Trafford is not the impregnable fortress it was for so long. When Ferguson stood on its ramparts, barking at would-be invaders, they toppled over. Moyes, with not a semblance of the stature of his predecessor, has been an easy target.

The progressive abandon with which teams now approach a fixture at Old Trafford, one which Arsene Wenger and his table-topping side curiously bypassed on Sunday, reflects a collective loss of aura; Manchester City have lost four of their six games away from the Etihad, Tottenham have scored fewer than everyone bar the season’s relegation fodder Sunderland and Crystal Palace, whilst the second coming of Jose Mourinho has spluttered and stalled at inopportune moments.

The challengers to the holy grail of Champions League are imbued with an increased sense of purpose this year. Liverpool, now in their fourth consecutive season outside of Champions League football are testament to the fate that befalls those who drop out of Europe’s elite; perpetual transition, board takeovers, managerial changes and an obscene rate of player turnover to find the magical combination. Only now, four years after the inertia first gripped, do they finally look competitive again.

Though Liverpool visibly struggled against Arsenal, their stiffest test of the season by far, they obliterated Fulham with ease on Saturday, reinforcing the belief that they are flat-track bullies; a term that attracts derision in some quarters, but a quality that is oft overlooked as the basis of a top-four finish. 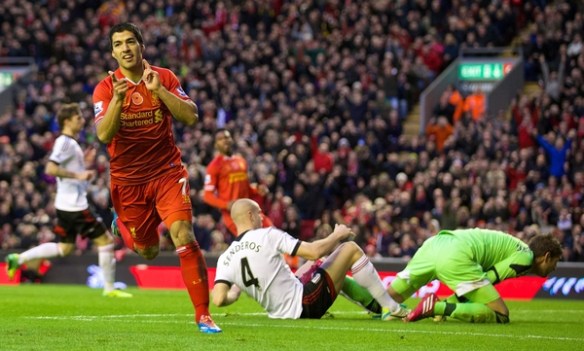 Tottenham have had their title ambitions checked; enduring, rather than enjoying, their best ever start to a Premier League season. In a division where goals are not especially hard to come by, where the top teams are reliant on attacking strength rather than built on defensive solidity, to be so miserly in front of goal whilst having such lofty ambitions is an obvious worry.

Spurs possess the second best defence, even with the continual presence of Michael Dawson, and are bettered only by the supremely impressive Southampton.

Significantly they have rained 73 shots that have yielded a paltry nine goals. Andros Townsend, the saviour of English football and the discovery of the season, has a pitiful shot-to-goal conversion rate of 2.2% (even that single goal against Aston Villa was a cross) – a product of his relentless pursuit to cut inside and shoot with his left foot.

Tottenham may have plundered £105m on filling the Gareth Bale sized hole in their squad, but with their midfield now so packed full of athleticism rather than artistry, they appear short of replacing his goals. Roberto Soldado is a centre-forward of pedigree, but has been stodgy thus far. His record from the penalty spot may be exemplary, but too often he slows Spurs down. Why so little has been made of the mere 72 minutes of Premier League action afforded to £30m star signing Erik Lamela remains a mystery.

Manchester City, many pundits’ pick for the title are experiencing the most polarising form of all; brutally brilliant at home and spectacularly brittle away. Manuel Pellegrini, “The Engineer”, has been unable to cure this particular ailment which dates back to Roberto Mancini and City’s title-winning season of 2011-2, when they won just twice in ten away games between November and April. 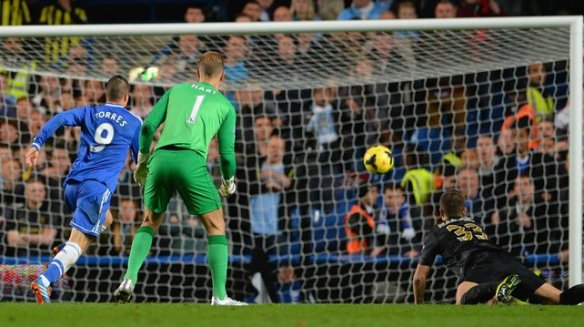 City’s bare statistics this season look formidable: a goal difference of +16, skewered by the 20 goals they have scored in five home fixtures. Their achilles heel remains a product of their top-heavy investment in recent years, which was covered in a previous column.

Arsenal, for all their wonderful artistry this year, and renewed sense of resourcefulness in defence, fell short in their sternest test. Despite a wealth of midfield options, Wenger had little in the way of attacking resources to overturn a goal deficit at Old Trafford, with Nicklas Bendtner and Serge Gnabry (despite his obvious promise) someway short of being viable game-changing options.

Everton have been something of a surprise package; overcoming the clichéd difficulty of implementing a new philosophy, borne mainly out of an enterprising summer of recruiting. The defensive worries that accompany Roberto Martinez as a coach have been eased – the Blues have gone some 350 minutes without conceding a goal – and they are proving difficult to beat; succumbing only to Manchester City’s faultless home record is no shame.

Chelsea, for all the predictions of an effortless slide back into Mourinhoism remain in the flux that has gripped them since the departure of Carlo Ancelotti. The failure to invest in a world-class goalscorer, or a central midfielder of sufficient pedigree, feels misguided in the face of their proliferation of attacking artisans. Their lamentable 2-0 reversal at Newcastle (who have themselves been violently unpredictable) was symptomatic of the transitional stage the side remains under.

But enough of the recriminations and the here-and-now. Where is this league of non-sensical, meandering plot-lines heading? As the Sporting Intelligence research shows us, City have the joint second highest points total for the side occupying 8th. After Spurs set the record points total for a team finishing in 5th after a 38-game season last year, 72, can we expect to see another 70+ plus point total fall short of Champions League qualification?

The False Nine’s take on the BBC’s Premier League predictor in August may not be the most scientific approach, but of the six who took part, four predicted record points tallies, again, for the team finishing in 5th.

It confirms what we do know, that the league remains predictable to an extent; that consistency is now almost impossible to come by, but that there is sufficient cannon-fodder in the lower reaches of the table for the top clubs to feast upon. The positioning of The Top Eight (as it should henceforth be known) is entirely less foreseeable.

The last time it was so close, in 2001-2, champions Manchester United were struggling to plug the gap vacated by Jaap Stam, and Arsenal and Liverpool looked well placed to profit from Mancunian chaos.

Arsenal’s tally of 25 points is the joint lowest leading total since then, matched by Chelsea in 2010-11, and marks the tightest the top of the league has been since the disintegration of the former Big Four in 2009-10. Somewhere between 80 and 85 points could prove enough to win the league this year, though the 70 point threshold, again, may not guarantee a top four finish. 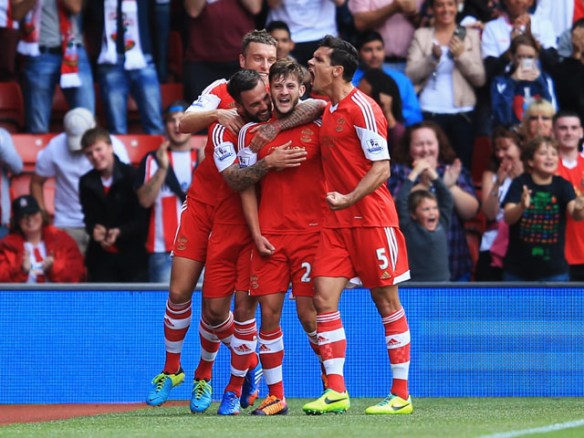 What makes this season’s league table so intriguing is the simultaneous renaissance of both Liverpool and Arsenal, along with the refreshing challenged posed by Southampton; the top 3 is occupied by teams no one realistically expected to be there in August – another similarity that 2013-4 shares with 2001-2.

It seems fruitless to draw conclusions from a season of overreaction, exaggeration and paradoxes, but there must be rhyme and reason for The Top Eight to be so obviously short of star quality and yet so depressingly superior to the rest of the league.

The watershed summer of change has at least produced the most uncertain start to a league season in over a decade. It’s unsurprising that the main beneficiaries of the pervading transition are the two who rid turmoil and emerged unscathed the other side – Arsenal and Liverpool. Southampton, the anomaly, are reaping the benefits of improving a system that was already working, and retaining trust in a talented core.

The increased competition in the league is not a revolution from below. It is not a sign of the rise of the masses, picking up the crumbs from the top-table – only Southampton have managed it, and not through chance but rather meticulous planning. Instead, it is the falling standards of the nation’s Champions League elite, whose fundamental flaws are present for all to see. Only Arsenal have hid them better than their counterparts, and Liverpool, of the chasing pack, have exaggerated their own qualities to the most effect.

Everyone is guilty of jumping the gun, of seeking to be the first to predict the renaissance of one and the demise of another. This season has been a watershed, fitting for the summer of uncertainty and upheaval that preceded it. Do we lament the overall lack of stardust and quality, or revel in the chaotic entertainment?

3 thoughts on “Editor’s Column: The Premier League Season of Over-Reaction, Exaggeration and Paradox”