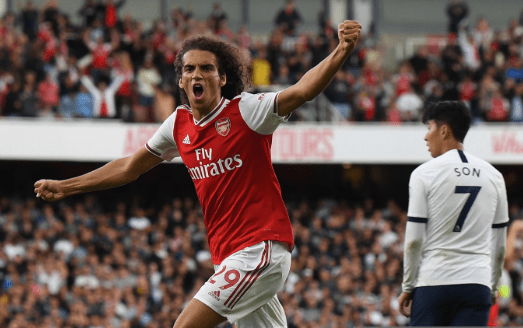 Sunday gave the world another thrilling North London Derby. In what is fast becoming one of the most entertaining fixtures in world football, it was hard to think of a player at the Emirates yesterday who for reasons good or bad, did not have some sort of an impact on the final result.

It was the 20-year-old with curly hair and the infectious smile who was perhaps the most influential of all. Matteo Guendouzi continues to ooze an impressive combination of quality and maturity beyond his years, and his assist for Arsenal’s equaliser was no less than his performance deserved.

While Granit Xhaka, supposedly a figure of authority and the man entrusted with armband by Unai Emery, looked like a fish out of water and a calamity waiting to happen, Guendouzi showed poise and purpose in the midfield. Xhaka gave away seven fouls, including the rash challenge on Son for Spurs’ penalty which allowed them to affirm their stake in the game. Meanwhile Guendouzi rarely ever went to ground; it’s more his style to make a standing challenge, win back the ball and look to play the pass.

Dressing rooms at any level are often divided along boundaries of experience. Elder statesman command respect and will not always be inclined to fraternise with younger players. Guendouzi’s confidence and attitude means he can cross those barriers. Alexandre Lacazette and Pierre-Emerick Aubameyang, two players at the top of the pile at Arsenal, who can count scores of career appearances and goals to their names, both see Guendouzi as an equal rather than just a junior member of the squad.

They are Emery’s lieutenants and their opinions count for a lot. When you watch Guendouzi put in a performance like he did yesterday, working alongside seasoned players and delivering the kind of service he did, it speaks of a deeper trust and of teammates acting on the same wavelength.

Still so fresh into his senior playing career, former coaches speak of Guendouzi’s hunger and his desire for self-improvement. “He loves football, he eats football, drinks football sleeps football,” Sylvain Ripoll, his manager at Lorient, said last year. For Emery, who preaches the importance of the training ground and of players who do their homework, he must be a dream to work with. “This year he’s starting to give us one step more tactically with the ball. He gives us a lot of control”, the Spaniard said after yesterday’s game.

There is something reassuring about watching a precocious, young French footballer breaking through at Arsenal that – inevitably – harks back to the Wenger era and there are obvious parallels with past players. Lucas Torreira may have been the recipient of Patrick Vieira’s chant, but it is Guendouzi who is now carrying the mantle of being Arsenal’s most effective midfielder. He is undroppable.

Guendouzi plays with a touch of class and a passing range reminiscent of Vieira in his pomp, but he also shares his leadership qualities. Remember his debut against Manchester City on the opening day of last season, when Emery decided to throw him in at the deep end? It was a baptism of fire against the Champions – both for player and manager – but Guendouzi’s confidence shone through.

He was never afraid to ask for the ball, or to attempt something ambitious because of his faith in his own ability. He seems to tackle every game with unfazed determination, as if he does not care whether he is playing against Ligue 2 relegation fodder or Pep Guardiola’s City. 50 odd appearances on for Arsenal and that same drive has remained a constant feature of his displays.

That’s why we shouldn’t call this a “coming of age” performance. The most exciting thing about Guendouzi is that this wasn’t unexpected. Anyone who watched the young Frenchman last season – or even just in Arsenal’s other games so far this year – will have known he had this level of tenacity up his sleeve. He is already so far along in development, it’s almost irrelevant to talk about age.

With the regrettable exit of Aaron Ramsey this summer and the ongoing angst around what Granit Xhaka actually brings to the table, Arsenal are crying out for a man to marshall their midfield. For the time being, no one looks more capable than Matteo Guendouzi.

There was a depressing air of familiarity in some of the responses to Hector Bellerin’s recent appearance at London Fashion Week. The Arsenal defender was photographed in the front row of the event, wearing something that looked a little like a dressing gown, with a pair of Gucci slippers. Rather than simply acknowledging a young footballer might want to do something interesting in the capital on a rare evening out, some publications cut a more vicious tone.

Commenting on Bellerin’s outfit, The Sportsman tweeted, “Get him in the bin, shocking that”. Scottish site Talking Baws wrote, “his latest outing saw him arrive in WOMEN’S pyjamas” (the emphasis is theirs). Others tweeted “She’s lost the fucking plot” and “What a twat”.

What is it that the football community finds so offensive about a confident, cosmopolitan young man enjoying himself? The insinuation here is pretty obvious. In wearing clothes that are a little ostentatious and more flamboyant than the average footballer or fan’s, Bellerin is seen to have crossed the threshold of what is considered acceptable masculinity. Between the lines, they’re saying: it’s not straight, ergo he’s gay. END_OF_DOCUMENT_TOKEN_TO_BE_REPLACED

Following Arsenal from any corner of the globe in 2017 has quickly turned into an abject misery. The season peaked in September with a 3-0 victory over Chelsea. The losers that day responded by changing their system and look set to clinch the title in emphatic manner; Arsenal, the winners, find themselves in familiar surroundings – out of the Champions League and clamouring to get back into the top four. The love affair with Alexis Sanchez is over; the closest I’ll likely get to a Chilean red next season will come in a glass bottle. END_OF_DOCUMENT_TOKEN_TO_BE_REPLACED

Between my fifth and six birthdays, two events took place that would shape not only my childhood, but also my teenage years and much of my adult life to this point.

On October 1 1996, Arsene Wenger began his 20 years as Arsenal manager, sparking the most successful period in the club’s history.

About nine months later, just as Wenger prepared for his first full season in charge, in which a young boy would become a regular in the West Stand at Highbury and watch Dennis Bergkamp make sport into poetry on the way to a double, Harry Potter and the Philosopher’s Stone was published.

Two decades on, and it seems fitting to examine the legacy of Wenger at Arsenal. Several brilliant articles have been written on it, notably Joe Bernstein in the Mail and Barney Ronay in the Guardian, while John Cross’ book on the Wenger years is a pretty complete analysis.

But none of them, as far as I can tell, have touched on the key aspect of the legacy debate – the Albus Dumbledore problem (more on that later). END_OF_DOCUMENT_TOKEN_TO_BE_REPLACED

A look at some of the other Premiership managers at the time of his arrival reveals much about the football landscape. Ron Atkinson, David Pleat, Jim Smith…many of Wenger’s rivals were of the old school and he came in as an unknown outsider. Not only did his nationality mark him out as different, his last job had been at Grampus Eight in Japan, a role he’d taken to challenge himself and to experience a change of culture.  END_OF_DOCUMENT_TOKEN_TO_BE_REPLACED

For all of the famed stories of bleary eyed Brazilians showing up at training a few pounds overweight, wearing shades to conceal bloodshot eyes, there are a plethora of Brazilian players that have demonstrated great humility and professionalism. END_OF_DOCUMENT_TOKEN_TO_BE_REPLACED

With clubs putting as much importance into qualifying for the next season’s Champions League as performing well in the current, Simon Smith asks what the point of the competition is…

Much has been made in recent weeks of the apparent unwillingness of Premier League clubs to participate in the dreaded Thursday football squad exhauster that is the Europa League. The earlier season push for Europe reached its absolute peak with victories over Arsenal for Southampton’s on New Year’s Day and Tottenham’s in the north London derby keeping the victors in the Champions League places on both occasions. But, with predictable familiarity, the enthusiasm for European football seems to have left both squads once the top prize became out of reach. Spurs and Saints have joined Liverpool on the list of suitors seeking to avoid the booby trap fifth place that consigns a team to the Europa League.

The size of the competition, endless travel to far off destinations in Turkey and Ukraine, and distraction of continually playing on Thursdays and Sundays are often touted as legitimate reasons for the Europa League being a poisoned chalice. One need only look at what Liverpool achieved – well, almost achieved – in their season bereft of midweek continentalism to see the damage it can cause, and so on. This is well covered ground.

What I want to know is, why don’t we see the same sort of thing in the Champions League? I mean what has the top level of elite European Club football ever done for the Premier League clubs? Besides the televisual and marketing exposure, commercial opportunities, additional revenue and pulling power when attracting players in the transfer market, is there an actual footballing reason for being in the competition? END_OF_DOCUMENT_TOKEN_TO_BE_REPLACED