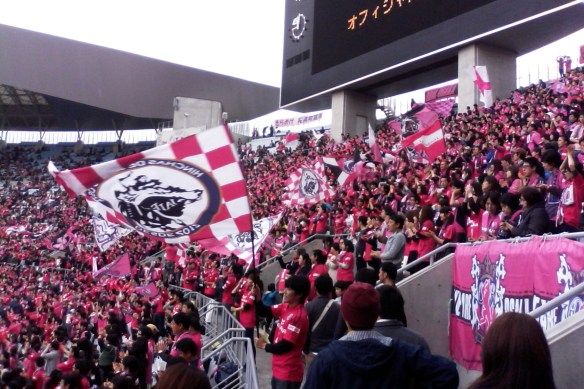 Coming out of Tsurugaoka station you could hear the chanting already. It was an hour before kickoff, but the Cerezo Osaka Ultras were already whipping up the crowd. It was so loud I started worrying the game had started and I’d got my times wrong in my hungover state induced by all you can drink Karaoke (yeah that’s as dangerous as it sounds) the night before.

Cerezo Osaka are one of two teams in Osaka, Japan’s second largest city, the other being Gamba Osaka. This season they have had massively contrasting experiences similar to those previously seen in Manchester before the sheikhs turned up. Gamba have already won one piece of silverware this year (the Yamazaki Nabisco Cup, one of their two domestic cup competitions) and can secure a league and cup double with wins in their last two games of the season. Cerezo on the other hand are staring relegation in the face with two wins needed in their last two games to have a chance of staying up. In fact they are only being saved from the bottom spot by Tokushima Vortis’ Derby County circa 2008 performance and prop up the 17 teams above them with 13 points from 32 games.

Cerezo find themselves in this position despite the presence in the squad of previous European Golden Boot winner Diego Forlan (evidently recapturing his Manchester United form rather than that from his time in Spain). Forlan’s move to the J League was a bit of a surprise as there haven’t been many big name signings since the days of Gary Lineker back in the ‘90s. Foreigners are in short supply in general as each team is only permitted four. Most of them hail from Brazil as Japan has strong ties with the country but scanning down the list few names stand out. It seems few choose to end their carriers here in the way they do in the MLS.

I’ve turned up early at the Nagai Stadium Complex to make sure I get a ticket as I was unable to decipher (even when sober) the ticket machines found in Seven-Elevens around the city where it is possible to get them in advance. The local train station is decked out in pink and blue (the club’s colours) so I’m in the right place although I’m still waiting to find out which stadium the game will be in. Cerezo (a reference to the flower of the city of Osaka) have two stadiums that they use depending on the size of the match, a situation Coventry City fans can only dream of. Today they are playing Kashima Antlers who are 7 times league winners so they are in the bigger Yanmar Stadium (were England played out a bore draw against Nigeria in the 2002 World Cup), which is a bit of a shame as the smaller Kincho Stadium has terraces, an experience you don’t often get in top tier football anymore.

I get a ticket for the home end for a reasonable ¥2,700 (about £20) and while we’re doing the cash comparison, beer is around £4 and there are various fried snacks from £1.50 to £5 (neither of which appeal due to my over exuberance the night before). I notice they have German beer and sausages for sale, which isn’t the only thing they’ve borrowed from Bavaria. As I walk into the stadium I’m hit by a wall of noise as the crowd chant song after song whilst being orchestrated by fans with megaphones like those at Bundesliga games. The atmosphere is electric. There are flags and banners everywhere and a fan beckons me to join the end of a row of bouncing supporters all wearing club colours. I happily oblige. 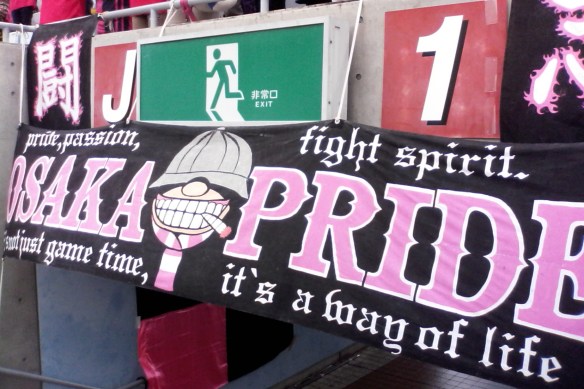 From outside the stadium the words to the song had sounded like “It gets better oh oh oh”, which I thought was an incredibly upbeat perspective to take on their current plight. I ask the lady I’m attached to what the song is and she tells me “we are sailors oh oh oh” (to the same tune) which makes sense due to Osaka’s proximity to the sea and probably more likely than my upbeat interpretation. I jump up and down with these fans until after about 2 minutes I’m knackered and starting to sweat out some of the alcohol from the previous night. They keep the bouncing going intermittently through out the game in an impressive show of support that might not be kicking every ball but is definitely using as many calories.

I wonder round the home end listening to the various tunes which invariably only have two lyrics Osaka and Cerezo but are rousing none the less. The chant I was previously singing now sounds more like “we are Cere-Zoh-oh-oh” which disappointingly isn’t as good as either of my other other lyrical guesses. The crowd seems like an interesting mix of society: old, young, families, men (some in suits) and women all sporting at least one pink item. Many of the seats are occupied by people’s belongings as they reserve their seats while they pick up snacks from the concession stalls (not all of which are run by the club, having the look of street food stalls) giving the stadium the look of picnic area in a park rather than a sporting arena. The away fans have a banner that says “The Spirit of Zico” who played for the club (Kashima had the catchy name of Sumitomo Metal Industries Football Club when he first joined the club) in the early 90s when the J-League was at its peak. He’s highly thought of throughout Japan and is referred to as the ‘God of Soccer’.

So to the game, and Kashima Antlers aren’t exactly the opposition Cerezo Osaka need right now. The most successful club in J-League history are in third place still with a chance of the title if they win their last two matches and results go their way in the other games. Cerezo have only had one win in five matches and their star man, Forlan, is injured and only able to watch from the sidelines. The kickoff has a slightly strange feel to it as the noise levels hardly fluctuate from their high level as the game starts, there’s not even a change of song as though what’s happening on the pitch is an afterthought. This isn’t that unreasonable as the pace of play from Osaka is slow and there are few quality touches from the men in pink.

The Antlers look threatening on the break and go ahead on 33 minutes after being given too much space by the generous Cerezo defense. Again the noise from the either sets of fans hardly fluctuates leaving me wondering if its been ruled out for offside, but the goal stands. Zico’s former club go two up after the break as the keeper and a defender collide and the high ball bounces in off the back of the strikers head. It’s not until Kashima get their third through some more primary school defending from the home team that Osaka stir themselves for their first proper shot on goal.

The Cerezo fans are rewarded for their support with a goal shortly after from striker Ryo Nagai who then has 2 more great opportunities for an improbable come back but misses both. As usually happens in these circumstances Kashima went on to get a fourth on 80 minutes and the game petered out although the fans admirably did not. Cerezo were relegated with that result and much to their fan’s dismay Gamba Osaka won and went top on goal difference. It’s bad news for the big club (they had the second highest attendance in the league that weekend) who have spent, allegedly, a league record $5.8m on bringing Forlan to the club, especially if he’s not around next season to help them back up.

Japanese football on a technical level is some way off that in Europe, from what I’ve seen, but it does have a lot going for it. While the limits on foreign players mean there is less quality on show I get the impression having mainly home grown players means the fans feel more of an attachment to the teams. But surely the main reason that the J-League will continue to attract fans is the infectious atmosphere in the stadiums, which is maybe something we can learn from in the UK.