A look at some of the other Premiership managers at the time of his arrival reveals much about the football landscape. Ron Atkinson, David Pleat, Jim Smith…many of Wenger’s rivals were of the old school and he came in as an unknown outsider. Not only did his nationality mark him out as different, his last job had been at Grampus Eight in Japan, a role he’d taken to challenge himself and to experience a change of culture.

It didn’t take long for the “Arsène who” headlines to look rash, with Wenger winning the Double in his first full season in 1997-98. In doing so he became the first non-British manager to win the League, a significant turning point in the globalisation of English football. There have now been over 50 foreign managers in the Premier League and in the likes of Pep Guardiola, Antonio Conte and Jurgen Klopp, it can count some of the biggest names in the game amongst its current crop of managers.

Wenger deserves credit for that. The immediate impact he had on an ageing Arsenal side, as well as the nurturing of younger continental stars, helped change attitudes. He showed a different approach was possible – including training, tactics and scouting – and could be incredibly successful. Knowledge is power and Wenger’s intimate understanding of French football proved fundamental in Arsenal title winning sides.

Having put in place the transfers of Patrick Vieira and Remi Garde in August 1996 before he arrived, Wenger added the likes of Nicolas Anelka, Emmanuel Petit, Thierry Henry, Robert Pires and Sylvain Wiltord over the coming years. Working with the sage-like ‘Professeur’ was a huge attraction and it’s hard to imagine Vieira, Henry or Pires in particular developing in quite the way they did without Wenger’s tutelage.

That opportunity to grow under such an intelligent man-manager was also what drew Tottenham captain Sol Campbell across North London to Highbury. It remains Wenger’s bravest move in the transfer market and a master-stroke that helped deliver another Double, an unbeaten season and a Champions League Final in the space of five seasons.

It was that Final in Paris which would end up becoming a transitional moment for Wenger and Arsenal. The following season saw the move to the Emirates, a process which the Frenchman was fully immersed in.

Those long, trophyless years that came after were marked by relative austerity in transfer budget and a shift to make the most of what was already at the club. It was a taxing period for the fanbase as Wenger became an increasingly divisive figure, seen by some as an obstacle to success with Arsenal overtaken by cash-flushed rivals Chelsea and Manchester City.

Yet even through those barren years, there were great Wenger moments. His 2007-08 side will be best remembered for their capitulation at St Andrews, but they played a lot of great football with Emmanuel Adebayor and Cesc Fabregas particularly impressive.

In 2011, Arsenal beat Guardiola’s Barcelona 2-1 in the Champions League with a 19-year-old Jack Wilshere registering a remarkably composed performance. They would go on to lose the second leg but Wilshere’s display had served as a reminder of Wenger’s ability to nurture young talent. The 2011-12 season was a virtuoso campaign for Robin van Persie in which he finished as the League’s top goalscorer, something of a reward for Wenger’s maintained faith in the injury-prone Dutch striker – although little could be done to prepare for the disappointment of his departure for Manchester United the following year.

Wenger’s critics would also do well to remember that football is a volatile sport and stability can bring a form of success in its own right. Take Parma, for instance, who enjoyed a rich period of success in the 1990s, finishing 2nd in Serie A the year Wenger joined Arsenal; last year they were declared bankrupt.

The footballing superpowers of Barcelona, Real Madrid and Bayern Munich have all spent time outside the Champions League in the last 20 years. For Wenger, that remains untrodden territory. Arsenal’s status as a Champions League club has been essential to their recent player recruitment, as the signings of Mesut Ozil, Alexis Sanchez and Granit Xhaka testify.

His reluctance to spend big, often though has had him branded as ‘stubborn’. ‘Principled’ might be a fairer way of putting it and in the two in the two personal experiences I’ve been fortunate enough to have had with Wenger, the grace and humility he’s known for was on display.

In 1999, aged 7, I wrote a birthday card to him, addressing it to the press office at Highbury. A few weeks later I received a reply, with the Arsenal letterhead, a short thank you message and Wenger’s handwritten signature. A classy gesture that meant the world to a 7-year-old and remains a prized memento.

Fourteen years later, I was making my way  to Barnet’s old Underhill Stadium with a friend to watch Arsenal play Marseille in the NextGen Tournament when a silver Lexus slowly pulled up behind us. Reaching the club car park, a slim man in a grey suit and cardigan that matched the car itself got out. It was unmistakably Arsène Wenger.

“Boss!”, I shouted, inexplicably thinking he’d respond to that. “Boss…!”. (Wenger was having none of my attempts of replicating the Thierry Henry Nike advert in which the striker breaks a photo of his manager before cupping his hand to his mouth to say “Sorry boss”).

“Arsène!”. At this point, the wiry figure turned round to face me. What followed was a brief exchange that I can hardly remember but I’m sure it was heartfelt, at least from my end. It struck me how down to earth this man really was. 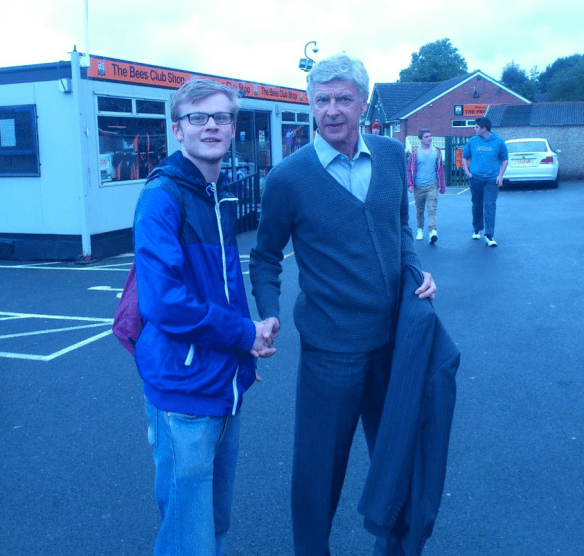 He had come to watch a youth fixture, a great incentive for the players that evening, and he’d turned up in his own, nondescript manner where he could still afford to give a piece of his time to a fan.

For me and my contemporaries, Wenger has remained the one constant in football. It’s hard to imagine there will ever be another manager who remains in charge at one club for so long, with the world of football not known for its patience.

Nor is any other manager likely to be afforded as much control as Wenger receives at Arsenal. With the growing presence of Directors of Football, transfer committees and intrusive owners, Wenger’s hand at all levels of the club seems near impossible to replicate.

As Wenger takes his seat in his Friday press conference, he will no doubt field questions from journalists on his 20th year at Arsenal. Not one for ceremony, he’ll give that knowing smile and a nonchalant shrug and tell them that, for him, this is just another day in a career he lives and breathes.