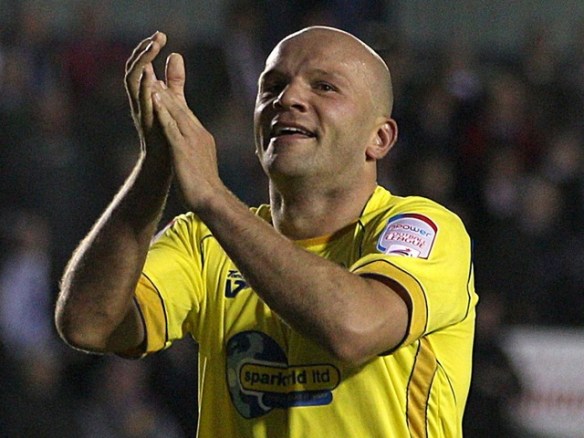 In the first offering of The False Nine‘s first exclusive interview, editor, Andrew Belt, speaks to experienced professional footballer, Guy Branston, about his career in the game and the formation of his exciting new footballer scouting website, All About Ballerz…

Guy Branston is not your usual interviewee. Bursting with enthusiasm for football, he can speak for hours on the sport but also listens to everything you have to say and answers everything honestly, giving you the utmost respect and attention throughout.

Fielding The False Nine’s questions while on a training bike and then doing his stretches, with his four-month old daughter being attended to when necessary, this is a fitting image of Branston. Forever multi-tasking and attracting a lot of press with the creation of his new business, All About Ballerz, the 33-year-old has played for 20 clubs in 19 years of playing the game and is the kind of person who appears to have unending reserves of energy, exuding positivity when in conversation.

“I’ve never been so busy in my life with a four-month old baby and the business. It’s difficult finding a happy medium with everything going on. Everything’s starting to click into place now,” says Guy when TFN asks him how he is. That he doesn’t even counter in his football – currently playing for Bristol Rovers on loan from Aldershot – tells you how what a heavy workload he’s taking on just now. But Branston is a determined person and explains where the idea for All About Ballerz stemmed from:

“In 2009, I dropped out of the Football League and my wages were halved. I tried to fight it with my agent and I was sitting there, panicking, thinking I’d have to work over summer. I wasn’t getting paid in the summer. I’ve never had to do that all my life. I went to coach in America and at Leicester City to earn more money. I was thinking if I stay in the Conference I wouldn’t be able to pay my bills so the pressure was on.

The All About Ballerz logo: Guy Branston’s promising new business

Set up only at the end of October this year, All About Ballerz invites footballers of all ages and abilities to upload a video on the website and get Guy’s own professional opinion on your video. The website acts as a directory for football scouts and managers, and there’s a regionalised search engine facility that lets you know if there’s someone in your area available to play a game locally.

Further than that, it can showcase promising talent and Guy’s been impressed with the responses to the website he’s been getting so far: “I get contacted every day by clubs, agents, scouts. I went through my emails the other day and I had 200 emails regarding All About Ballerz from people from various parts of the world. Jamaicans, Africans and Colombians have all got in touch. The chairman of Barnstaple Town rang me up and asked me if we could link them up with all the lads in North Devon but I’m trying to shepherd everyone to every club, not just to one individual club. One of the guys from All About Ballerz was invited to play for the Barnstaple first team and this has given that lad another avenue of income from the £3 service I’m giving.”

And that’s all you have to pay to earn Branston’s help with your football career: “It’s [AAB] the cost of a magazine. A cinema ticket costs £12. It’s ridiculous and for the price of £3 plus VAT to keep the tax man happy you’re given the opportunity for a second chance to earn a contract.”

He goes on: “Clubs may not want to load clips of their academy kids for fear of them being stolen but what about the ones they’re releasing? The biggest age group which drops out of football is 16-19. When those kids go, what do they do? I’ve been in that situation before and mentally, it affects them. They need guidance from somebody to help them get back in the game. It doesn’t always happen and sometimes getting a call from a manager, a player or an agent can give them that confidence boost again and that’s where the website can help again.” 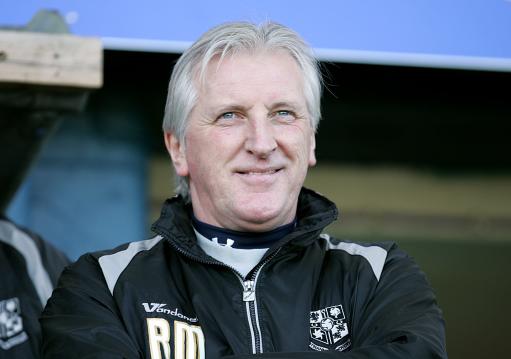 Ronnie Moore: One of the best managers Branston has worked under

Talk moves back to his own career in the game and Branston’s more than happy to discuss his experiences of playing all over the country for 20 different clubs. He highlights his time at Rotherham United as the best example of team spirit he’s encountered, speaks fondly of playing for a club the size of Sheffield Wednesday and recalls the personal peace he found at Torquay while playing for the Gulls. For different reasons, and in no particular order, he lists the five best managers he’s worked under as Martin O’ Neill (“he had the aura of Clough about him”), John Gorman (“a lovely fella”), Ronnie Moore (“you couldn’t help but like him”), Paul Sturrock (“probably the best I’ve worked under in the lower leagues”) and Paul Buckle (“a great help with my fitness”).

So far, Branston has made nearly 500 appearances in all competitions and scored 26 goals. He has won five promotions in all with the 1997-98 Third Division Play-Off win at Colchester United and successive runner-up spots at Rotherham his best team achievements but Branston singles out his place in the 2010-11 PFA League Two Team of the Year as a personal career highlight: “I’ve won promotions in my career and they’re great, but to be voted by my fellow professionals into the Team of the Year was huge. I dropped out of the Football League at 28 and within a year, I got into the League Two Team of the Year. It’s a huge accolade.”

After failing to break into the team at Aldershot Town at the start of the season, Branston was loaned out to Bristol Rovers and he’s enjoyed it so far: “Signing for Bristol was a massive plus because I wasn’t getting in for a team in the same position when I think I should have been and within two days of signing, I’m playing for a big club and I’m in their first team. They trusted in my ability so that gave me confidence straight away. I’m definitely enjoying it but I want to win!” 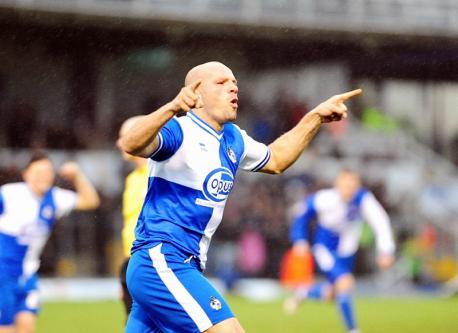 Since arriving at Rovers, Branston scored within 70 seconds of his debut in an entertaining 3-3 draw at home to his former club, Bradford City, before playing in disappointing defeats away at Wycombe Wanderers and against Dagenham & Redbridge at the Memorial Stadium. They currently occupy one of League Two’s relegation places but Branston is positive about the club: “I don’t see the element of negativity around the place as there was when I was at Bradford. The only negativity I’ve seen is when we lost on Saturday [1-0 at home to Dagenham & Redbridge]. I expect to get booed off when we lose to Dagenham & Redbridge.

“There’s everything there [at the club] for it to work. When you’re talking about football clubs of the future there’s so many attributes at Rovers with the new stadium [in the offing] and a chairman putting his money where his mouth is. The fan base the club has is ridiculous. I think I got 500 more followers on my Twitter account after signing and all positive people talking positive stuff. It’s got the potential to rock League Two and it’s about building momentum with the chairman and Mark McGhee [manager at Bristol Rovers], I think.”

Branston could be described as a no-nonsense defender and his attitude and willingness to use techniques to give him the edge over opponents have served him well throughout his career, “I think attitude’s a massive part of the game. The ‘blood and thunder’ and determination of my game are all part of my make-up and that helps mentally. Understanding the game is another important mental aspect of football.

On this note, Branston details experiences of youngsters failing to achieve their potential by having a poor attitude and his words are worth heeding for up-and-coming footballers, “I see a lot of kids in Premier League academies who aren’t willing to listen because they think they’ve already arrived in the game. The environment at their club is too positive so their mental state is blown-up too much. They’re on FIFA as an apprentice and their ego means that when Premier League youngsters come down the divisions they’re not willing to listen to players who’ve played 500 games and had a career in the game. That’s because they think they’re already going to be million-pound players in the Premier League and nine times out of ten they won’t even make the Premier League.

“I don’t really think a Premier League kid would fit in at Bristol Rovers at the foot of the table. Fans cry out for those kind of kids to come to the football club. You’ve got to have mental strength when you come to struggling clubs and by that token, have mental strength when you join a winning dressing room. It’s a nasty place, the dressing room.” 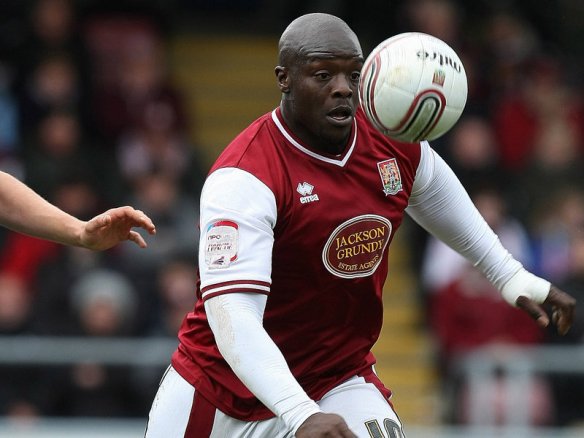 Adebayo Akinfenwa: The strikers rates Branston as a tough opponent

TFN asks Branston whether he likes to get into his opponent’s head during a game, “I slate them. [Adebayo] Akinfenwa [Northampton Town striker] mentions me in his interview [with Zoo magazine] for how much abuse I gave him while playing, saying he couldn’t concentrate and things like that. I’m not someone to get involved with players anymore. Don’t get me wrong, as a kid I was quick to argue and fight my corner but now I concentrate on the job and the team I’m doing it for. I have my own kind of recipe for annoying them. It’s a mental battle every day.”

So, what of Branston’s future in the game? “I want to play as long as possible. I’m someone who enjoys going out there and training. Once I feel like it’s gone, I’ll stop. I know I’ve got a lot more attributes to offer. One of main goals in life was to be a football manager and hopefully I can do that. I think I’ve got a lot of attributes across the football spectrum to help me with that job when I actually go into it.

There’s no doubting that Guy Branston is a name you’re likely to hear about in football for many more years to come. As candid as he is caring, whether it’s in business, football or elsewhere, you get the impression that he’s the type of person you’d always want to have alongside you in the trenches.

Such is the volume of quotes we got from Branston that we will be uploading the second part of our exclusive interview with the player next week.

With thoughts on the cost of following football, who he rates as England’s best emerging talent and the tough times endured at Bradford City, it’s a cracker so don’t miss out!

To go on the All About Ballerz website: http://www.allaboutballerz.com/