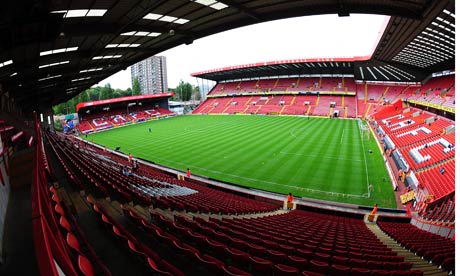 Last weekend, my club Charlton Athletic celebrated the 20th anniversary of ending its exile from The Valley. Charlton played against Brighton and Hove Albion in a thrilling game that ended 2-2. Other than a mutual rivalry with Crystal Palace, Charlton and Brighton both share another thing in common; in their recent history, they had to leave their respective home grounds and share with other clubs. I am too young to remember Charlton’s exile, but the fact that it’s such an important part of the club’s history meant that I’ve learned all about it ever since I started watching Charlton all the way back in 1996.

Brighton and Charlton were forced out of their grounds due to similar reasons. Charlton left the Valley in 1985 after going into administration. The Valley was criticised for being unsafe (this was after the Bradford City disaster at the similarly-named Valley Parade), but the club could not afford to repair it. They then had to move to Selhurst Park, home of Crystal Palace. After many years there, and a brief spell at Upton Park, the Addicks moved back to the Valley and marked their return on the first game back with a 1-0 win over Portsmouth on 5th December 1992. Charlton were managed by Alan Curbishley and subsequently rose up the ranks in the leagues, and from 2000 up until 2007 the club were an established Premier League club.

Brighton, on the other hand, played at the Goldstone Ground until 1997, until financial precarity meant they had to ground-share with Gillingham. This peculiar ground-share – Gillingham and Brighton are separated by a distance of approximately 60 miles – followed by a move back to the south coast to play at the Withdean Stadium, a decrepit athletics stadium, almost put the club out of business. Since then, the club’s fortunes have turned around, represented by their re-location into the new Amex Stadium in Falmer and is currently pushing for the Play-Offs in the Championship.

The rivalry between Brighton and Crystal Palace is one that baffles the outside football world considering their geographical distance, but the rivals are brought together by the curious phenomenon of ground-sharing. Palace, after sharing Selhurst Park with Charlton between 1985 and 1991, then hosted Wimbledon up until their extinction in 2003 and controversial move to Milton Keynes. Wimbledon used to play at Plough Lane, but the limited size of the ground could not match the Dons’ successful surge to the old First Division – amidst transition of becoming the Premiership – and the legacy of the Taylor Report decreeing the necessity of all-seater stadiums; they subsequently left their home to share with nearby Crystal Palace. Wimbledon enjoyed nearly a decade in the Premiership, but their relegation in 2000 precipitated the demise of the club into the franchise now known as ‘MK Dons’. The unfortunate fate of Wimbledon is perhaps the most uncomfortable consequence of the Premier League era; the extinction of a club that just 15 years previously had won one of the most remarkable FA Cup Finals of all time.

Wimbledon’s fate has put an indomitable stain on the concept of ground-sharing, but back in the days before money governed the English game it proved a worthwhile operation. During the Second World War, Manchester United’s ground Old Trafford was bombed and became unusable. United were saved by their neighbours City, with whom they shared City’s Maine Road until 1949. Fast-forward 56 years and you find another tale of Mancunian ground-sharing; the protest club established by disillusioned Manchester United fans, FC United of Manchester have been sharing Bury’s Gigg Lane since they were founded in 2005. The security and stability that Bury’s generosity provides FC United has safe-guarded the club and has contributed to their rise through English football. They currently ply their trade in the Blue Square Premier North, whilst the club’s highlight arrived in 2010 when they beat League One side Rochdale to reach the second round of the FA Cup, where they forced a replay but eventually lost to Brighton. Gloucester have a similar set-up, playing at Cheltenham Town’s Whaddon Road as they seek pastures new closer to home. 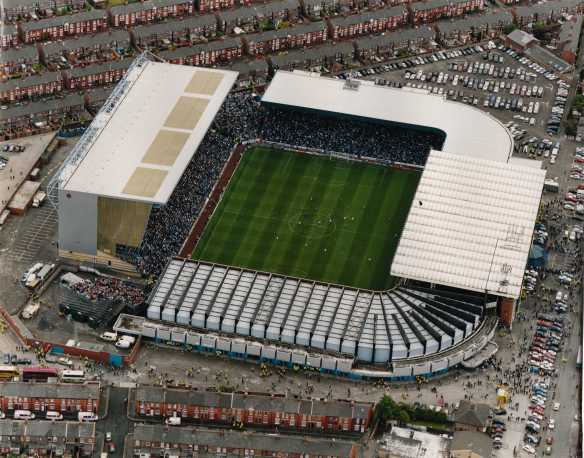 Maine Road – synonymous with Manchester City – yet borrowed by rivals United for a time.

Fulham are another club to profit from ground-sharing, when, in 2002, they moved into local rivals QPR’s Loftus Road stadium whilst their own Craven Cottage was being renovated. Fulham had recently been promoted to the Premier League, but Craven Cottage still held standing areas in the ground; their rise through the leagues had been so meteoric that they had not been previously required to adhere to the Taylor Report. Fulham returned to Craven Cottage in 2004 with its increased capacity to 22,000 and have become a stable Premier League club since.

Nearby phoenix club AFC Wimbledon, a club set up in protest of Wimbledon’s move to Milton Keynes, have played their home games at Kingstonian FC’s ground in Kingston since their inception in 2002. Since then, much like the original Wimbledon, they have climbed five levels of the league pyramid to reach League Two and hold the prestigious record of being the first club formed in the 21st century to reach the Football League.

Ground-shares possess an intriguing back-story in the culture of English football but are also commonplace on the Continent. The most high-profile are located in Italy and Germany; the San Siro and the Allianz Arena.

Internazionale and AC Milan have shared the San Siro since 1947. This is perhaps the most high-profile ground-share in world football given the enormous success of both clubs throughout the history of Italian football. The two Milan teams have secured 18 Serie A titles each, 12 Coppa Italia titles and 10 European Cups. Milan edge Inter in terms of the total amounts of trophies, with 47 compared to 39. The ground-share has had little impact on the success of either club, though Inter, having sold a stake of the club to a group of Chinese investors, are in the process of drawing-up plans to leave the San Siro.

Germany’s most noticeable ground-share is between the two Munich clubs – FC Bayern and 1860 Muenchen at the Allianz Arena. The stadium, built for the 2006 World Cup, and opened in 2005, is fitted with panels on its outside that can change colours to illustrate which side is playing – red for FC Bayern, blue for 1860 and even white when Germany play there. The stadium can, in theory, be lit up in many colours at once, but Munich police have banned it – due to it distracting drivers on a nearby Autobahn. The groundshare has, much like the Milan groundshare, had little effect on either team in terms of form; FC Bayern are still the most successful club in Germany, despite Borussia Dortmund’s recent dominance, whilst 1860 are still the underdog of Munich. 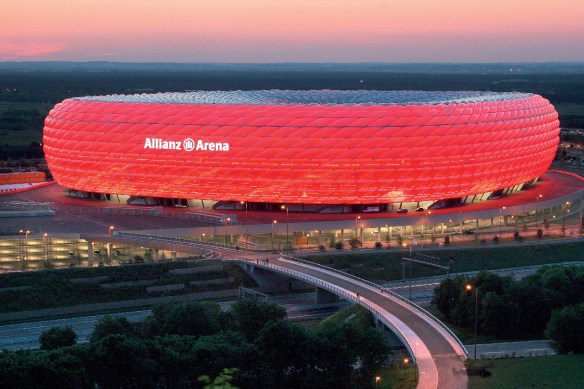 The iconic Allianz Arena – an engineering marvel, and another example of ground-sharing

Meanwhile in Russia, CSKA Moscow have shared the Luzhniki Stadium with bitter rivals, Spartak Moscow, and are currently in residence on the outskirts of Moscow at Stadium Khimki alongside Dinamo Moscow. All three capital city clubs plan to move into their own new stadiums over the course of this decade as the country’s football scene experiences an unprecedented economic boom and some of the effects of this sprinkling of oligarchs’ money into the Russian Premier League will be seen at the 2018 World Cup.

Despite the success stories of ground-sharing overseas, the concept remains a provocative subject on these shores, especially to football fans; the thought of sharing a ground with a rival set of supporters that the club identifies against is anathema in this day and age. The vitriol which accompanied a prospective ground share between Everton and Liverpool reflects that fact. To fans it is not simply a ground, but a place of pilgrimage, and so they would never countenance a proposal to merge the cathedrals of Goodison and Anfield – a fact that many commentators in the past have overlooked and disregarded.

Of similar controversy is Barnet’s proposed move to Earlsmead Stadium, home of Isthmian League Premier Division Harrow Borough, next season from their historic Underhill ground. The Bees have been met by stubborn resistance by the local council in their bid to stay in Barnet and the result of turfing the team out of Underhill could seriously threaten the long-term future of Anthony Kleanthous’s club, particularly with Barnet in serious danger of dropping out of the Football League this season. Starting the 2013-14 Conference season at Earlsmead Stadium would quite possibly result in a drastic fall in crowds for Barnet and test Kleanthous’s purse strings like no other point in the Bees’s history. Not only this, but Borough fans would resent the move as Barnet would likely eat into their already small fanbase and take away from their own efforts as a club exclusive to Harrow.

In a year when the topic of who will get to use the Olympic Stadium every week has become a major talking point and the recent MK Dons-Wimbledon clash in the FA Cup raised some skeletons in the FA’s rather cluttered closet, perhaps we should take a closer eye on stadium developments going on in our local areas.

Despite the obvious barriers to a personal identity originating from a stadium you can call your own, many ground-shares, taking place for a multitude of reasons, work for both clubs.

But after growing up supporting my club in this little part of South London, I would never want Charlton to leave the Valley ever again.

One thought on “The Many Faces of Ground-Shares”