What made the analysis good was what was left unsaid. Kolarov was effectively analyzed as if he was a midfielder in City’s 2-6-2 formation. There was no mention of his poor defending for a defender because, well, nobody considered him to really have given a defensive performance. Finally the penny has dropped! For his entire Premier League career the Serbian has been labelled as a defender who gets forward to support the attack but is too poor when not supporting the attack, when doing his primary job of defending, for a top class side.

Now it seems everyone is slowly starting to twig that this is simply not true, he is the exact opposite. An attacking winger who drops back to defend when required: his positioning is high, returning only when the opposition looks to break rather than deep until there is an opportunity to attack. This is why when he plays it can often seem as if City have no left back, because they don’t. 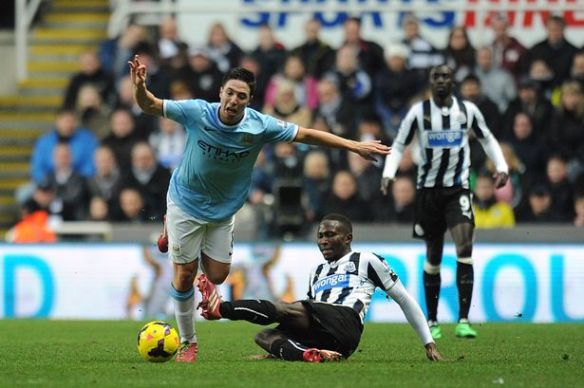 The contrast between this non defender and Newcastle’s Yanga M’Biwa could not be more stark. The centre back filling in for the injured Debuchy offered nothing going forward and remained cautious, and yet through the constant mauling he took by the ‘Silvarov’ combination, his disgusting tackle on Samir Nasri late on and eventual substitution, it should be clear that he did not have a good defensive game. The plot thickens: how did a defender who can’t attack but can defend allow himself to be so badly beaten? It looked as if, despite good pace and strength, he simply wasn’t comfortable in wide areas.

The answer might lie on the other side of the Newcastle defence with bizarrely left footed right back Davide Santon. In a world of inverted wingers and central playmakers often on the flanks, where the full back knows he is equally as likely to be beaten towards goal as the byline, does it not make sense for the full back to also be inverse footed? Post-Ferguson we have lost the league’s best crossing side, none of the top three have a strong tendency to play traditionally like-sided wingers and yet despite this the idea of inverted full backs seems something of a major novelty.

Sure they might seem more likely to get sucked into the width of the box when defending on their stronger, inward facing side, but as we are constantly told by the tabloids, proper English wingers have forgotten how to cross. Even the paragon of the ‘whipped in’ delivery Ashley Young has changed his preference to the diagonal run into the box followed by a dive. Perhaps now risking being beaten outside is better than the cut inside.

But this would, of course, vastly diminish the ability of the full back to overlap on the attack and ruin his ability to cross. The increased chances of him cutting inside and shooting seem a poor conciliation given that the midfielder in front drifting in, presuming he is inverted, will do this anyways. This is where the real intrigue lies, if you’ll bear with the hypothetical. Fans, media, pundits and managers repeatedly lambast defenders who can’t defend and wingers who don’t cross despite these both being in vogue.

An inverted full back would be much more solid defensively against someone like Silva, and force him wide where he can do less harm. Couple this with a good old fashioned crossing winger in front, free from defensive responsibility of the overreaching full back, and born in a world where people have forgotten how to defend the cross, and you have a veritable paradigm buster of a strategy. Hypothetically, if it were to work, of course.

Perhaps most brave of all would be to play this player instead of a centre back, with the touchline-hugger and the inverted inward drifting wingers in front of him. Madness you say!  True, it would be a bold strategy for a manager to do such a thing, and the full back would of course have to be versatile enough to be comfortable as a centre back when defending. The traditional-footed player in front would then drop deep to become a full back, dropping from a high position instead of pushing from deep.

Before you have me sectioned, I draw your attention to Manchester City last weekend once more, and to what I am calling Pellegrini’s brave decision to play two left wingers and no left back. Instead of the left sided centre back glancing nervously across whenever Kolarov was absent, imagine if that player were a right footed left back who could drift between the centre and the wing.

Against the popular lone striker formation, is two centre backs really necessary if this utility man could cover? If you haven’t worked it out by now, my dream is for Micah Richards to partner Vincent Kompany so that he can drift left, as a wrong footed left back, behind Kolarov, the left footed winger, and Silva, the inward drifting playmaker.

Granted the whole concept hinges on me dubbing Kolarov a winger and not a defender. But I truly believe he is a winger, or possibly a new type of player that has broken free of being a full back, a cup-half-full back or an over the shoulder glancing retreating attacker. Sadly it seems more likely that Gaël Clichy will return to the side for games that require a more secure defence rather than my strategy be tried, which is a shame.

A back three and a half is a beautiful thing to behold if done properly, as Barcelona have done with Busquets the third centre back, as Bayern are doing with the elusive mid-fender Philipp Lahm, and as Roberto Martinez came oh so close to doing last season with his lopsided back three.