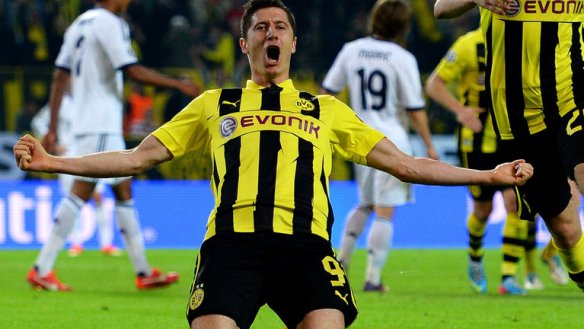 He doesn’t have one tenth of the talent Lionel Messi does. He will never match the phenomenal force of Cristiano Ronaldo. And even when he eventually joins Bayern Munich, he could well play second fiddle to Franck Ribery. Having said all that, Robert Lewandowski should have won the 2013 Ballon d’Or.

Before you roll your eyes, I’m not a jumped-up Bundesliga “expert” with a BT Sport subscription who could tell you how the intricacies of Lewandowski’s games are more tactically flexible, his pressing more effective than the three nominees, or anything like that.

It’s just that if you do insist on giving out an individual award in a team sport, it’s not very interesting simply to ask “who is the best?!”. Laboriously working over the stats to try and come to some sort of scientific conclusion is a fruitless task; subjectivity will always be present. Some people are Messi people and some are Ronaldo people, just as some prefer Oasis and others Blur. Some don’t care.

Instead, the Ballon d’Or should be a bit more like the Oscars. Film awards aren’t handed out to whoever the best director in the world is at that exact point in time. An Oscar is an award (or it’s supposed to be) for the single most accomplished performance or achievement in film of that calendar year. Look back on 1997 and you think Titanic, 1986 and Platoon, 1972 and The Godfather etc etc.

For example, Danny Boyle is not as good a director as David Fincher but in 2008 he made Slumdog Millionaire, a better film, which had twice the cultural impact that year of Fincher’s The Curious Case of Benjamin Button, and deservedly took home the Best Director and Best Picture awards.

So when the world looks back on football in 2013, which individual players will we remember? The history books will undoubtedly have a place for Ronaldo’s records; but how many of those brutal slayings of hapless La Liga defenders could your average football fan actually pick out? Messi was largely brilliant, but he’s been better.

Even taking into account his injury at the time, the prevailing memory of Messi in 2013 for those beyond Cataluña will be his no-show in the Champions League semi-final, where he stood powerless as Bayern Munich made Barcelona old news. And then Ribery, a key part of the year’s great team, but it would be hard to argue a case for that Bayern side not achieving something special without him.

Which brings me on to Lewandowski and his spectacular four goals against Real Madrid in the Champions League semi-final. That was the best individual performance of the year on such a grand platform. Yes there was Ronaldo’s stunning single-handed destruction of Sweden, but that was a Swedish defence containing Martin Olsson and Mikael Lustig – hardly Sergio Ramos or Raphaël Varane.

Not since Messi vs Madrid in 2011 at the same stage of the same competition has one player demanded the attention of so many. Everyone with a passing interest in football would have been watching that game – and none of them will forget what they saw. Lewandowski was simply exhilarating. Varane and Pepe couldn’t get near him. You couldn’t take your eyes off him.

As football fans these days we’re all experts. If a young winger is tearing people to shreds in the Norwegian league, we’ll have read about it. So, before that game, everyone knew Lewandowski was pretty special. But those Bundesliga bloggers aside, few of us knew he was that special.

And that was what made his performance so exciting to watch. It was the making of football’s next superstar, beamed onto TV sets around the globe. When we look back on football in 2013, we’ll think of that game and we’ll think of Robert Lewandowski.