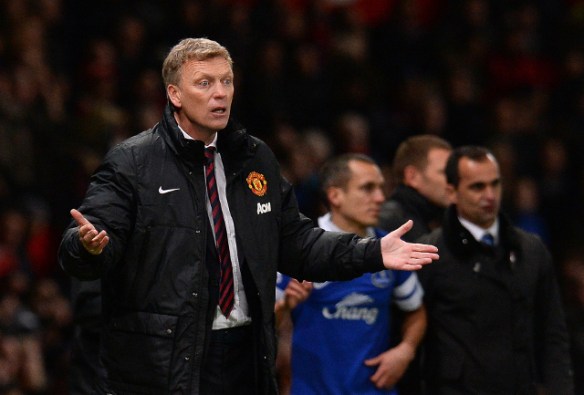 David Moyes arrived at Old Trafford as the man who was supposed to provide continuity following the reign of Sir Alex Ferguson. A Caledonian compatriot cut from the same cloth, so the narrative went: a safe pair of hands to maintain what Ferguson had built, rather than a radical looking to change a successful club.

Yet just six months since Moyes officially arrived, Manchester United look a shadow of their former selves. Pedestrian in attack, porous in defence and often vacant in spirit, they have been described as the worst reigning champions in Premier League history.

At first glance, there doesn’t seem to be too much different in the team’s set-up. Although Ferguson may protest that he rarely played a true 4-4-2, a variant on this oft-maligned system was, and still is, the default formation. Similarly, United still tend to attack down the wings, as they did under Fergie from Ralph Milne onwards – and as at Everton, Moyes has continued to encourage his full-backs to join in on the overlap, sometimes at risk to their defensive duties.

There’s been plenty of criticism rained down upon United’s wingers this season but Antonio Valencia, Nani and Ashley Young rarely looked like world-beaters on the way to securing the club’s 20th league title. The problem is that Moyes’ style of football has made wing play not just an option, but United’s dominant method of attack.

According to WhoScored.com, last season United averaged 28% of their time in the central zone of the pitch (as opposed to the wings), coming out eighth in the league for the proportion of their play that went through the middle. So far this season they’ve spent only 25% of their time in central areas – the lowest percentage in the Premier League. Although such margins may seem insignificant to some, the teams who were bottom of the pile for the same stat in 2012/13 were the struggling duo of Reading and Sunderland with 25% and 24% of their play taking place through the middle, respectively.

Nobody would expect United to attack constantly down the middle. Besides their historic love of wing play, they have a notable lack of world-class players in central midfield, either a regular goal threat through the middle or a dynamic, box-to-box presence able to punch through the melee and make things happen. Tom Cleverley is no Bryan Robson, Roy Keane or even a Darren Fletcher. He also isn’t Paul Scholes.

Of course, goals have been scored and chances created from the middle this season, usually by the occasional excellence of individuals, but as a team Moyes’s men seem single-mindedly one-dimensional in their plans: a pass to the flanks, a panicked cross into the box.

This lack of a genuine world-class central midfielder is a longstanding problem, but managers are supposed to maximise the resources available and Ferguson managed to find a way round it – almost literally. His United at least flirted with the pretence that something dangerous could come by attacking within the width of the penalty area.

Attempted short-passing interplay in and around an opponent’s box and through the channels, or some patient time on the ball – especially at Michael Carrick’s feet – may not always have penetrated, but it certainly drew markers in. Just as a team sitting deep can coax the other side forward, creating space behind them to attack, United’s willingness to be patient in possession or attempt to spring through the middle with a clever bit of play, however incompetent, offered just enough wiggle room out wide.

As well as facing a fear factor that now seems to have gone, opponents of Ferguson’s teams had to defend much more diligently across the full width of the pitch. After all, though his individual midfielders may not have been the continent’s finest, they still had enough quality to score and create when given room, and so had to be closed down.

Consider the last two visits of West Brom. In last season’s 2-0 win, the hosts’ highest passing combinations came from Nemanja Vidic to Chris Smalling at the back, Valencia to Danny Welbeck up front and some back-and-forth between midfielders Carrick and Cleverley and full-backs Patrice Evra and Rafael.

By the same fixture this season, there had been a clear shift in intent. The dominant combinations became Jonny Evans to Carrick followed by Carrick to Nani, with two of the other top five also including Carrick as a recipient. While the England midfielder has long been the club’s main passing hub, as United lost 2-1 to the Baggies at home this season, his role had been boiled down to being a conveyor belt for wide balls.

Without much of an alternative, however flawed, opponents are able to dig in, hold their shape and brace from the next predictable wave of speculative crosses, rushed in due to the lack of space and time and lost element of surprise.

It may be a stylistic tweak, but the main problem is that it’s not working. True, United’s average number of crosses has gone up from 25 per match to 27 – but that’s an unimpressive uptake considering the amount of time they’re spending in wide areas. Predictable teams are easier to defend against.

It’s not enough to simply write off Ferguson’s successes with a similar group of players as the effect of a true great squeezing every last drop of performance from his personnel. There are lessons to be learned in just how he went about mining even the most deficient part of his squad for that extra edge of percentage.

While Moyes undoubtedly needs time, not to mention major investment to remove the weaknesses in United’s squad, he must also look closer at how ideas similar to his own were made to work with raw materials available to him. At present it appears that he has overlooked one of the subtlest yet surprisingly important facets of Ferguson’s glorious reign.

This piece was originally published by FourFourTwo.com on January 10 2014. All stats derived from the FourFourTwo StatsZone app unless stated otherwise.

4 thoughts on “How David Moyes made Manchester United one-dimensional”