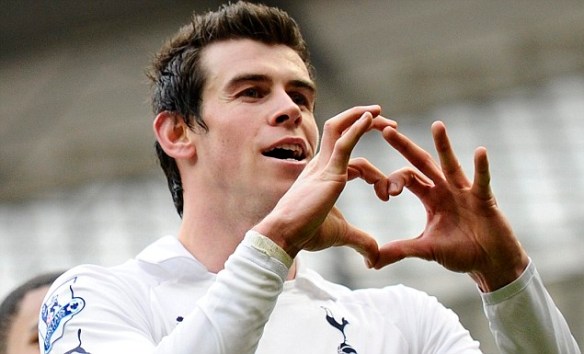 The Tottenham midfielder is applying for use of the logo on clothing, jewellery, headgear, and of course, being a footballer, footwear. According to the IPO website, he has also applied to use the logo on “animal skins, hides; trunks and travelling bags; umbrellas, parasols and walking sticks; whips, harness and saddlery.” Quite the range.

The idea behind image rights is that a household name, such as Bale, has control over how their name and face is used and exploited commercially. Traditionally this is the use of the players face and name on promotional material, advertising and marketing.

Bale’s case is unique because having a brand image is slightly different from the conventional footballer’s image right deals. It allows Bale to stamp his brand and thus ‘his image’ on literally any product that he wants and for him to receive revenue from it.

This would set Bale up for a considerable commercial gain when the rights are granted to him, some estimates as high as £3 million a year; meaning that roughly around 1/3 of Bale’s income would be drawn specifically from his own image rights.

Bale can use this vast income to give himself more leverage in a contract negotiation, signing over part of the income and part of the right to use his image to his club in joint commercial ventures in order to facilitate a mutually beneficial contract; or to place himself in a strategic financially beneficial bargaining position. As if 31 goals for club and country last season weren’t enough of a bargaining chip.

Bale certainly isn’t the first footballer to exploit his household name for financial purposes. Cristiano Ronaldo has registered trademarks for the use of both CR7 and CR9 in any official merchandise. David Beckham started way back in 2000 when the then Manchester United darling attempted to control the use of the phrase ‘Smokey Beckham’ in the UK crisp market.

Brand Beckham went on to capitalise spectacularly on his own image and nowadays Beckham makes enough from his image rights that he could forgoe any salary in his recent sojourn at PSG and subsist quite comfortably on his beautifully chiselled face alone. Quite the PR win for everybody involved, one French Sports Marketing professional even called the move a “perfect publicity coup”.

However Bale is the first player to move his imaging rights so far into his own control with a designated logo. By wresting control firmly into the camp of ‘Brand Bale’ it is possible that the Welsh flyer is trying to establish his own brand as the future premier football marketing juggernaut in world sport.

One issue that Bale could handily be avoiding with his new logo is that of unauthorised trade marking of players name’s by Chinese companies. According to Chinese news reports “Of the 368 players participating in the European Championships of 2012, 88 players had their names trademarked without their consent by Chinese companies. According to the Chinese legal system, anyone can raise an objection to a trademark during a three-month review period.”

The football players have five years to raise objections over use of their names as trademarks, but essentially the Chinese businesses are gaining from player’s image rights for nothing. This has resulted in the production of: “Phillip Lahm pesticide, a C Ronaldo flush toilet and Saint Iker jewellery.”

A brand in the style of Bale’s ‘Eleven of Hearts’ would be difficult if not impossible for companies to recreate without severe legal implications. There is an element of Bale protecting his financial interests in a very astute and proficient manner. Cheap knock offs may not be impossible to stop, but a recognisable world brand image makes them a lot harder to recreate unofficially. Bale will keep a majority of his ever increasing global earnings, setting him on course to one day potentially overtake Brand Beckham.

Bale is far from being David Beckham in terms of a brand or from earning Beck’s endorsement takings of $42 million dollars a year, but if his new logo is a success, he could be on his way to one day being even bigger.