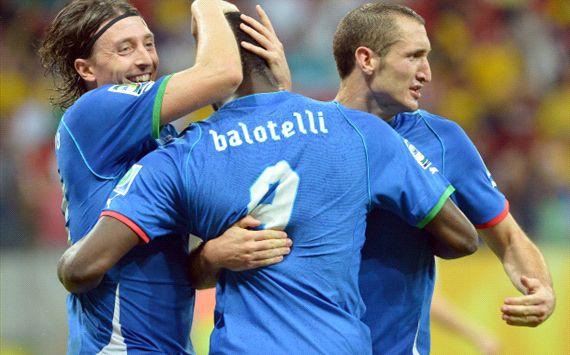 Last night it reached its zenith as Italy and Japan played out an absolute humdinger in Recife. It caught us all slightly unawares after Brazil’s rather subdued and functional 2-0 win over Mexico, which, were it not for the fleeting flashiness of Neymar (and the fact that Jô is the second top goal scorer of the tournament so far with just 17 minutes under his belt), would not have lived long in the memory.

This didn’t appear to be a fixture that, from the outset, would set the pulses racing. But 10 minutes in and with the Japanese haring around the Italians’ half, it was a sign of the mayhem to come. Seven goals, two penalties, two goals ruled out for offside and three crossbars hit. It’s a leading contender for the best football match of 2013 so far.

Despite Italy’s late exhibition of daylight robbery, which came so cruelly after Japan’s best spell in the game, a period which was an utter masterclass in ball retention, the match still felt like a victory for romanticism. Indeed, there is something beautiful and joyous about international football, which returns the sport to its purest form. It’s difficult to believe that the flow of this match would have garnered similar emotions had it been between, say, Manchester United and Chelsea.

Japan may well have been the underdog, and the neutral’s choice, but Italy’s triumph was so illogical and nonsensical that it laughed in the face of the statisticians who aim to sanitize football into systematic figures and percentages.

The Japanese made 349 passes in Italy’s half, which is a truly staggering statistic; their ambition and endeavour took the Italians to the brink, but, ultimately, was not enough to win. That, after what seemed an age of methodical build-up-play from Japan, the winning goal came from a quick and incisive Italian counter-attack was poetic in the extreme.

We were also afforded half-an-hour of Alberto Aquilani. A rare treat, but really a glimpse at the fragility of human mortality. Il Principe is a shadow of the player he was before his move to Liverpool; injuries and years of instability at club level – worsened by his chronic misuse at Anfield – have robbed the midfielder of the peak years of what was once a promising career.

But allied to the drama on the pitch, was the stark nature of watching a football match live on BBC1 between 11pm and 1am. This in itself was a victory for the hardcore football purists, who salivated over watching the sport at such a bizarre time of day, even though the dreadful combination of Robbie Savage and John Hartson as pundits had the nation scratching their ears out.

Being half-the-world away, this competition has brought the most unusual kick-off time for an international tournament since the 2002 World Cup in Japan and South Korea. The surreal nature of watching a live football match on BBC1 at midnight is without precedent in recent times. So to watch this glorious football match unfold so late at night, when so many had shunned the tournament through pre-determined cynicism, made it all the more worthwhile.

The 2002 World Cup is so fondly remembered for those 7am kick-off times. That Ronaldinho goal happened before 10am – how on earth the nation made their way through the next 12 hours of the day we will never know.

These outlandish kick-off times will afford the 2014 World Cup a unique charm, and allow it to be revered in a similar haze to 2002, no matter the quality of the football – although, were we to see a repeat of this game in 12 months time it would surpass the entire entertainment levels of South Africa 2010.

With the latest fixtures next year due to start at 1 o’clock in the morning, we can expect even more of these barnstorming games on balmy June evenings. Bring it on.