An interesting tie between two of Europe’s biggest clubs has gone a little unnoticed. Both in the shadow of the massive clash between Manchester United and Real Madrid and because of the perception of the Bavarians as hot favourites for the quarter finals, Arsenal versus Bayern Munich has slipped through the cracks of our attention somewhat.  Nonetheless it promises to be an intriguing matchup. Both are attacking minded teams with undoubted talent in the forward line and the ability to exploit each other’s defensive flaws.

Arsenal are having a poor domestic season as a result of their trademark inconsistency.  Early season title-challenge talk and two clean sheets under influence from new assistant manager Steve Bould seem long ago now. All of this indicated the promise that the squad has and once again points to a mentality problem in the dressing room. Certainly, performances of confidence have contrasted harshly with lacklustre displays against average opposition and much will depend on which side turns up against Bayern Munich on Tuesday. If other big games against Manchester United, City and Chelsea are anything to go by then the Gunners may be in for a tough evening. 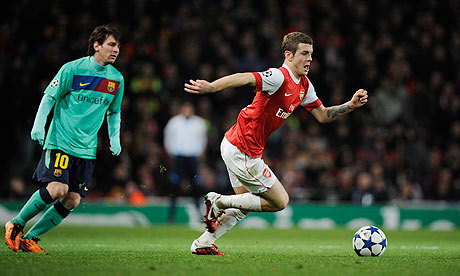 Santi Cazorla and Jack Wilshere are both set to start in midfield, but in what capacity remains to be seen. The two have at times struck an exciting partnership in attacking midfield with Wilshere running up from a deeper position, but somewhat fatigued displays by Cazorla in recent weeks have made the way for his junior teammate to push up to the number ten position. Some argue that the Spaniard is wasted on the wing while others disagree because his cutting inside allows for an extra man in midfield, and a greater creative influence. Either way it is likely the deeper midfield pairing will be of greater influence, with two of Wilshere, Diaby, Arteta, Ramsey and Coquelin competing to start and each player having distinct strengths and weaknesses.

The physical presence Coquelin and Diaby might not be necessary against the German side’s composed and assured midfield, but the latter’s tendency to dribble and carry the ball will be useful if Wilshere is deployed in a more advanced position. Arteta, on the other hand, is calm and confident in possession but often slows moves down – his performance against Sunderland exemplified this perfectly, with Arsenal dominating possession but often in a sterile and unthreatening manner. However against a Bayern team who will seek to compete for possession themselves, composure in midfield will be essential and Arteta is likely to start. His leadership capabilities and experience will be invaluable should the tie end up in extra time and penalties.

The wings have been something of a weak position for Arsenal, which has surprised some given that they boast Walcott, Podolski, Oxlade-Chamberlain and Gervinho. Certainly pushing Cazorla wide would improve this area of the pitch and with the in-form Podolski on the left wing there would be a good level of creativity. More likely centre of attention this season Theo Walcott will start on the left for such an important tie as opposed to his preferred central role.  is desire to run through into the centre will work well if Cazorla is instructed to cover this with diagonal runs to the right wing, and Walcott’s impressive goal ratio from this position is doing his claim to be a central striker no good at all. Up front Olivier Giroud’s intelligent movement has been more important than his goals but Munich’s defence will have to prove they can deal with his physical presence. In light of the scandal surrounding Juventus’s defending of corners at Celtic Park, the Bavarians will have to find a way to cope with the big Frenchman’s aerial threat.

It has long been something of a cliché that Arsenal are fragile at the back, but defence will indeed be the area concerning Arsene Wenger most. Last season’s stand out defender Laurent Koscielny is suffering from poor form and is not certain to return from injury, while the usually consistent Bacary Sagna has been off colour and club Captain Thomas Vermaelen also unimpressive and injury prone.

The best performer has been the now-injured Kieran Gibbs and worse still his replacement Nacho Monreal is cup tied, although the departure of Andre Santos to Gremio on loan can hardly be called a loss. In light of all this a makeshift defence is likely to partner Mertesacker with Koscielny and deploy Sagna and Vermaelen at full back, providing the French and Belgian internationals pass their fitness tests. Failing that promising young players Ignasi Miquel, Jernade Meade and Carl Jenkinson have the ability to fill in but not necessarily the mental strength for this level yet.

Arsenal’s lack of first, second, or even third choice left back will be Bayern’s primary point of attack. Franck Ribery on the left has terrorised some of Germany’s top defensive players this season, and gave Wolfsburg’s Makoto Hasebe a game to forget over the weekend as Bayern cruised to a 2-0 victory. Ribery’s speed, agility and dribbling have provided a wealth of assists and goals for Bayern this campaign, and it wouldn’t be surprising to see the Gunners’s fullbacks struggle to neutralise his threat. On the other side on the wing, out-of-favour Arjen Robben might have made a convincing argument for his return to the squad on Friday after netting against Wolfsburg… were it not for the fact that the goal would have been impossible without a visionary assist from Thomas Müller, who has been Robben’s replacement on the right this season. With eleven goals and nine assists in the league, it’s unlikely that Robben will win his place back. 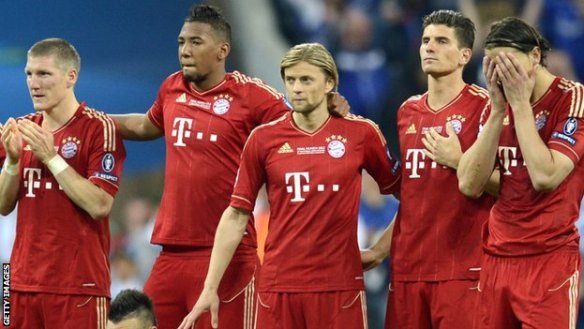 Part of the reason Müller and Ribery have had such productive seasons in terms of goal scoring is largely due to the arrival of Croatian international striker Mario Mandžukić. It originally appeared that he was brought in to replace the injured Mario Gomez, but with Gomez having been fit enough to start for a while now, Mandžukić is still keeping his place in the squad. It might seem baffling that the replacement striker has ousted one of the superstars of German football, but Mandžukić has been able to drift out to the wings, allowing either Ribery or Müller to come into the central striker’s position. This degree of fluidity is one of the major reasons Bayern are having a record-breaking season. Another reason is that young German international Toni Kroos is meeting his potential. Despite being much-maligned last season, Kroos has provided six goals and seven assists from the number ten position and on top of that, he’s also one of the most defensive-minded attackers in the league, and regularly tracks back when Bayern are under pressure.

Defensively, Bayern have been having no problems. Despite the loss of centre back Holger Badstuber to injury, Jérôme Boateng—and, more recently—Daniel Van Buyten have been more than adept at filling in. It’s a tossup between the two as to who will start against Arsenal alongside Dante, but whoever it is will likely be the team’s weak link. Although Arsenal shouldn’t take much optimism from this, since Bayern have only conceded seven league goals so far. A key defensive battle for Bayern will see former Bayern outcast Lukas Podolski go up against Philipp Lahm—who needs no introduction—on the left.

In the middle of the park, Bastian Schweinsteiger will likely glue the midfield together, but marquee signing Javi Martínez missed the weekend’s game with a bruised toe, and it remains to be seen whether he’ll be back in the squad for the match, although it was most likely that Jupp Heynckes wanted to rest him anyway on Friday.

There is still a bitter taste in the mouth of Bayern fans from that evening back in 2012, and with the league looking to be wrapped up, and a good chance they will win the domestic cup, Heynckes will be looking to top off his final year in football with a landmark triple that will usher in a new era of dominance for Bayern Munich as Pep Guardiola prepares to take over.