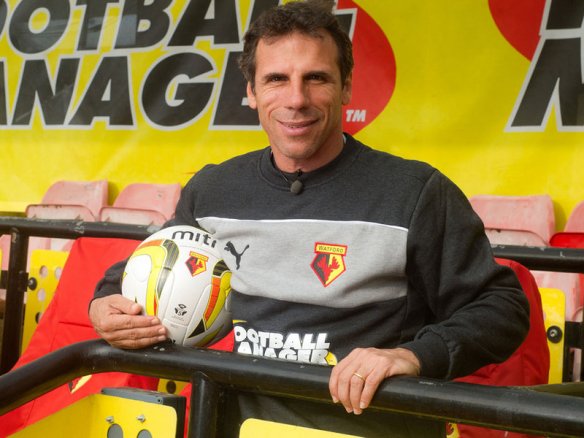 When the Pozzo family bought Watford last summer there was an air of excited anticipation, twined with slight trepidation. The Udinese and Granada owners brought financial security, at least in the short term, to a club who have had to make do with a very tight budget. And make do they have. A combination of shrewd managerial appointments – Brendan Rodgers, Malky Mackay and Sean Dyche reflected the ethos of the club of looking for young, talented British managers, choosing to promote from within; Mackay and Dyche both played for Watford.

In Southampton-esqe style Dyche was sacked having guided them to a respectable 11th-placed finish to make way for Gianfranco Zola. Just over half way through the Championship season, with Watford 6th in the table, the gamble (if it can be called that) has paid dividends. An influx of players loaned from Pozzo-owned Udinese such as Czech international striker Matej Vydra, on 16 goals, have complimented a squad often underestimated in ability. Vydra’s pace and quality of finishing wouldn’t be out of place in the Premier League. Having scored 53 times in the league they are the Championship’s highest scorers and until recently were the highest scoring team in English football, now eclipsed by Manchester United and Port Vale.

The foundations of Zola’s success should be credited to Dyche who formed an organised team, one that was very hard to breakdown. It is little wonder Dyche’s new charges, Burnley, are doing so well, currently one place below Watford in 7th.

After a modest start to the season, Watford slipped to 20th and were knocked out of the League Cup by giant-killers Bradford City. Since this period of adjustment to life in the Championship for both Zola and his new players, Watford have steadily climbed the table with notable away wins against Crystal Palace and Middlesbrough, not to mention a 6-1 mauling of Leeds United. 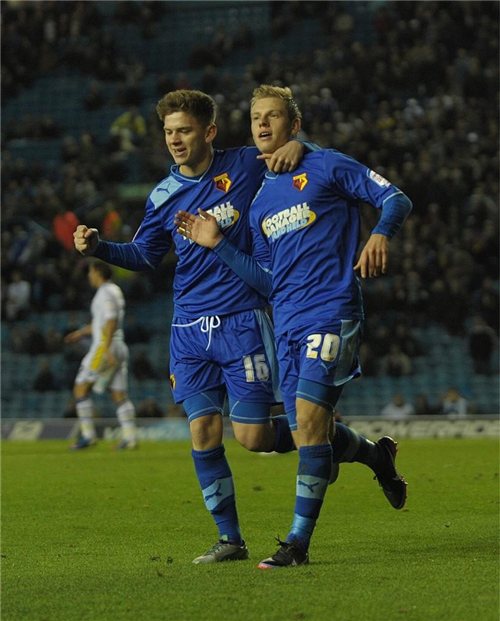 High point: Matej Vydra celebrates yet another goal on a dark day for Leeds United

Arguably Zola’s biggest achievement has been to introduce attractive football to Vicarage Road, a welcome change from long ball tactics. Whilst there isn’t a Barcelona, Arsenal or Swansea ‘possession is everything’ mentality, Zola has got the right balance of direct, counter attacking play combined with patient build up play. Most importantly, it is working. If the Hornets win their game in hand, away to relegation-fodder Bristol City they go up to 4th, just one point off automatic promotion.

With the January transfer window rumour mill in full spin, rumours are gathering pace that Roman Abramovich is considering a move for the ‘little wizard’. The former Chelsea player, previously voted by fans as the Blues’ best ever player is certainly popular at Stamford Bridge, his tenure at West Ham was short lived despite leading them to 9th.

There have certainly been stranger moves in the glorious world of football than if Zola were to leave.

Much has been made of the ethics that surround Udinese donating several players for Watford’s benefit. Is it fair they get players that ordinarily they wouldn’t have access to? Additionally what is the alternative?  Wait for a rich tycoon to spend your way to promotion, is that any fairer?

Watford have long utilised the loaning of young talented players; the likes of Ben Foster, Tom Cleverley and Adam Johnson are the stand out players of a long list. Currently, Chelsea’s Nathan Chalobah looks to be a very promising talent, at only 17, the defender come midfielder’s eye for pass and decision-making is outstanding as he has more than held his own in one of the physically toughest leagues.

One loanee, Fernando Forestieri has made his move permanent, signing a five-and-a-half year deal, the fee undisclosed but thought to be free. It is thought more of the current loans will be converted soon. Detractors may cry that this is even more unfair yet advocates rightly argue that this shows the Pozzos’ commitment to Watford is real.

Overall, Watford and Zola have done extremely well to be in the position they’re in, by the end of the season reaching the play-offs or anything more will be a bonus. As City’s comprehensive 3-0 win over Watford in the FA Cup proved they have a lot to do before they are ready for the Premier League. Under Zola, they are heading in the right direction.