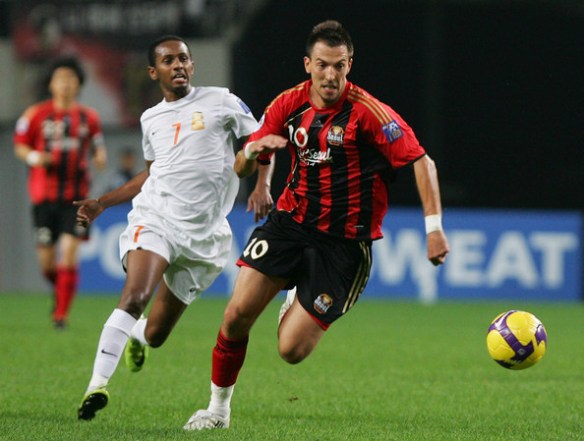 Dejan Damjanović is a name unfamiliar to most on European shores, but the 31-year-old Montenegrin striker recently became the highest scoring foreign player in Korean league history and continues to see his ever burgeoning popularity grow amongst the fans of FC Seoul.

For much of his early career, Dejan, as he is known by the fans, was something of a journeyman, spending time at various clubs in the lower leagues of Serbia and Montenegro, struggling somewhat in front of goal and finding himself lacking both form and goals. In 75 games between 1998 and 2003, he managed only 18 goals, and there was little to suggest that one day he would achieve anything to make him worthy of becoming this writer’s obscure footballing favourite. This began to change with his move to Bežanija in the Serbian Superliga. A three year spell, interspersed with two loan spells, including one in Saudi Arabia, saw him net 37 goals in 76 games and earned him a move in the winter of 2007 to K-League side Incheon United.

Although only spending a short time at Incheon United, he netted 14 times in 26 games and his ability in front of goal caught the attention of FC Seoul, the main club based in South Korea’s capital city. Three seasons of reasonable success followed in which Dejan scored roughly one goal in every two games he played, a return any striker would look on with favour. In 2011 though, he found his shooting boots with a gusto and topped the K-League scoring charts with 24 goals in just 30 league games. It was during this season, in a game against the newly formed Gwangju FC, that Dejan cemented his place in this writer’s footballing memories.

A visit to the Seoul World Cup Stadium had begun as an opportunity to see the site of the second biggest football stadium in Asia and the 2002 World Cup semi-final between South Korea, who had shocked all with their fearless play and the way in which they dispatched both Italy and Spain in the knockout rounds, and Germany. Although having absolutely no grasp of the Korean language, the pre match buzz is something that is surely universal and it quickly became apparent that this was game day. After using what can only be described as ridiculous sign language and broken English, tickets were bought and this writer got a first look at the inside of the stadium that saw the end of the South Korean World Cup dream in 2002.

Somewhat inevitably, the only other Caucasian in the ground quickly caught the eye, but truth be told Dejan made himself hard to miss after opening the scoring after only five minutes. Once he added a second after 20 minutes, he would never be forgotten. The confidence and freedom with which he played made him hard not to like and by the end of the game it was not just his appearance that separated him from the rest of the players on the pitch. He was, quite simply, a class above the rest and ended up playing the pivotal role in what was a fairly routine 4-1 victory.

At 31 and with an obvious love for his life in Seoul, it is highly unlikely that Dejan will ever grace the shores of Western Europe, whilst the effervescent talent of compatriot Stefan Jovetic limits his international opportunities. It may be, therefore, that to witness the talent of Dejan a trip to Seoul is necessary, but barring that this writer suggests searching for some of his finer moments on YouTube because he is undoubtedly a fine footballer and the kind of natural goalscorer most teams would love to have.