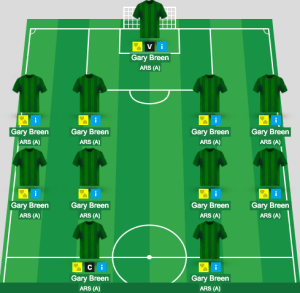 Yes, it’s that time of the year again. The sun is out, the sky is blue and pollen is waging a full-scale offensive on the nation’s airways. Transfer rumours are zipping back and forth faster than photons in the Large Hadron Collider, as football fans shun the beautiful weather to crowd around laptops praying that their “undiscovered hit” from last season hasn’t gone up in price too much. That’s right folks, the fantasy football season is upon us.

Say goodbye to your summer. Who has time to stock up on vitamin B when there’s player stats and data to absorb? It’s back into the routine: studying re-runs of Match of the Day in search of this season’s unrated ultra-performer and tinkering into the wee hours to divine the best value midfield pairing possible. Some managers, less hardy humans than us, will fall by the wayside as their once in-form players turn into pub league plodders.

Henry Gregg, the fantasy football champ friend interviewed in Musa Okwonga’s Will You Manage? had it right. The name of your team is all important. Not only is it the closest thing you have to a badge, it’s also the only insight your rival fantasy managers in the public leagues will have of your psyche and personality, and it’s in public leagues, open-to-all, that the most intriguing fantasy football battles will take place.

“I hate you Jim’s Jalopies 89!” you will shout. “Curse you and your captain’s hat trick Kyle United!” comes your anguished cry. Against complete and utter strangers, the tensest sporting battles of your year will take place. You’ll grow to know, hate or even fear imaginary squads and their titles, which must be less than twenty characters. Whether you loath, sympathise or applaud the fortunes of your enemy can come down entirely to how good their team name is, because when it comes down to it nobody can begrudge victory to clubs built on exceptional word play and imaginative puns.

This year, players of the official Premier League fantasy football competition, can even take things one step further, with a kit editor as simple as it is obsessive. I’ve opted for a simple two-tone green striped jersey, with white shorts and green socks with a white trim: simple, but effective. It took a frankly embarrassing amount of time for me to perfect, but that’s all part of being a modern, hard-working football manager, right?

So, what’s in a name? There are several basic types of moniker you need to watch out for.

The Guess Who I Support
This breed of team name is most often found in forum leagues featuring supporters of a certain team. Semi-cryptically, these aliases shout from the rooftops about the team preference of their virtual but uncreative gaffer. It beats playing in a league of 20 Arsenal or Chelsea’s I guess (see below).
Examples: “Mancunian Spurs FC”, “AFC Gunnerzz”, “Super AC Mario”

The Oil Baron
As with Sheikh Mansour, Roman Abramovich, or the paltry poultry barons of Blackburn Rovers, users of this particular team name genre like to exert a certain amount of ownership over their team. It’s as if the great big column titled ‘Manager’ and featuring your full name wasn’t enough, with these users branding their team like a birth certificate. Such efforts range from the subtle to the blindingly obvious, with a little bit of inspired punnery making all the difference.
Examples: “phils flyers”, “Hoddersfield Town”, “Casey’s Wonder Lads”

The Username:
A shockingly unimaginative waste of a team name, these managers simply cannibalise their forum names or gamertags from elsewhere, inserting them unromantically into the team name section. Don’t do it kids, just don’t do it.
Examples: “Undertaker69″, “Mlmc12345″, “DomIG1047″

THE CAPSLOCK:
CAPSLOCK TEAM NAMES ARE INCREDIBLY ANNOYING. THEY READ LIKE SHOUTING, WHICH, AFTER EVEN A SHORT AMOUNT OF TIME TRICKS YOUR EARS INTO HURTING WITH SYMPATHY FOR YOUR EYES. IT’S FANTASY FOOTBALL’S EQUIVALENT OF A WAR CRIME.
Examples: “DARLO TWATTING SQUAD”, “WOO PIGGEH”, “TEAM DENCH”

The Punctuation Pose:
There’s always one, isn’t there? The smart aleck who decides that the regular 26 characters of the alphabet aren’t enough, and that numbers and other punctuation marks must be used to make a good team name. These people are arses. At their worst, these names are completely unreadable. Just try chanting the name of our third example.
Examples: “Rejuvenated~11™”, “P€R$I€$ P£N$ION!”, “….ǞĴ’z xȉ…..”

The No Imagination Whatsoever:
There are many people out there who, for whatever reason, think a team name isn’t that important, and that their energies are better spent in team selection. Well they’re wrong, and if their efforts in the selection screen prove to be unsuccessful, they’re stuck with an incredibly dull team next to a drab mid-table position. This is how Sam Allardyce names his fantasy football teams. Place names followed by “XI” are similarly uninspiring and so also fall into this category.
Examples: “Liverpool FC”, “Chelsea”, “FC Barcelona”, “World XI”

The Norfolk N Chance:
What’s better than the word “fuck”? I’ll tell you: using all your wit, smarts and imagination to cleverly broadcast the word “fuck” in public – a riot right? I know! Alternatively, these names could also find a home in the No Imagination Whatsoever section.
Examples: “Norfolk Enchance”, “Norfolk N Chance”, “Norfolk An Chance”
See also: The Inter Ya Gran, and, any name including the word “banter”.

The In Your Endo:
While related, these team names are a class (as in school) above their Norfolk N cousins. These attempts at sidestepping the rules are mass produced with each new fantasy football season by a willing staff of Inbetweeners fans from a bunker in Dorset. Probably.
Examples: “Shakhtar Senseless”, “Crystal Phallus”, “Chamakh My Bitch Up”, “BarcaBoneHer”

The Boaster:
If you’re calling your team the champions before the league has even started, watch out. It didn’t work at Eurovision, and it’s not going to work here.
Examples: “I WIN”, “Gonna Win Again FC”, “WINNERS”

The Pun:
The Pun is designed to lull you into a false sense of security or distracting hilarity, thus: “Oh look how good his footballing pun is. He must have spent a long time thinking about it to come up with one so good, leaving him with no time to perfect his team. Maybe I shouldn’t try so hard either!” Unfortunately, many of the best puns come from those to whom they come naturally, leaving them with plenty of time for team selection. Tread warily.
Examples: “Scooby Dudek”, “Debbie Does Gallas”, “Tekkerslovakia”, “MurderOnZidanesFloor”, “Moves Like Agger”, “De Gea Bar”, “Raise the Ba”, “Call Me Bebe”

The Old Sticker Album:
This distinction contains some of my personal favourites: team names designed with footballing nostalgia in mind. Remember those blindingly average footballers that filled your sticker albums in the mid-90s? Chances are you’re going to meet them once more online in the fantasy leagues thanks to the naming habits of this select breed of virtual manager. An enjoyable trip down memory lane, usually, or a nightmare of uncomfortable flashbacks, depends on the referenced player’s role in your team’s history. Puns are mandatory to avoid slipping into the realms of No Imagination Whatsoever.
Examples: “DontMake Emile Of It”, “Sex+Drugs+Andy Cole”, “Pesky-Solido”, “Cadamarterrible”, “Heart of Jimmy Glass”

The We’re Shit and We Know We Are!:
If you see any team names of this variety, then chances are the user behind it is British. Norfolk N Chance aside, we Brits are the masters of false modesty and putting ourselves down. The cold hard truth however, is that behind every name like this there lies a desperately competitive player, just aching to win. More tea?
Examples: “Substandard Liege”, “Pathetic Athletic”, “Red Star Below Grade”, “Beatable City”

The Self-Referential:
For when it all gets too much, and the most logical thing to do is to name your team after the pressures involved in the process of naming your team. Perfectly understandable.
Examples: “Hilarious Team Name”, “dunno yet”, “inb4 original name”, “football team”, “name here”

What’s that you say? What do I label my fantasy teams? Last year I ran with “Bayern Bru” but it’s time for a change.

After spending several minute deliberating I had it. Not wanting to have a CharacterLimitTester on my hands, I opted for the Steffen Freund homage that is “Arbeit!”. Yes, that is an exclamation mark in the team name, making my effort something of a multi-tasker: a Guess Who I Support, Punctuation Pose, Foreign Talent Invasion, and until the moment of his appointment at Spurs the other week an Old Sticker Album as well.

Naturally, you’re going to draw your own conclusions on me as not only a manager, but a person too based on this. Go on, I don’t mind. Honestly, because you better believe I’m judging you by your team names, too.

Every single one of you.