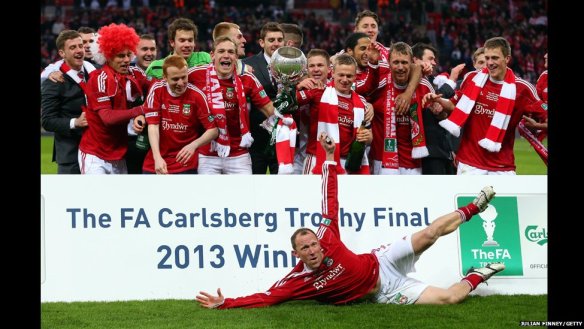 No set of football supporters deserve it more; ‘stand up if you own your club’ they chorused during a pedestrian first half. To imagine Wrexham running out at Wembley was little more than fanciful in those days of financial ruin under two years ago. For this set of players to seize the day and return the efforts of their supporters with blood and sweat on the field was a testament to the special bond that exists.

It transcends all that we think and know about the much maligned concept of ‘modern football.’ As Andy Morrell acknowledged over his can of Foster’s in the post-match press-conference, nothing the players ever do will repay the effort and dedication of this set of supporters. This coming from a man who spearheaded Wrexham’s promotion to Division Two in 2003 before returning to the fold seven years later and then stepping into the managerial vacuum created by Dean Saunders’ abrupt departure in September 2011.

Morrell is synonymous with the struggles of this football club, and he has grown into a commendable spokesman. He, the players and the fans are a perfect marriage.

As he lifted aloft the Trophy, the last of the playing staff to do so, his relief and ecstasy was  borne out on the Wembley screens – it struck of someone who understands this club, and understands its meaning and significance in the local community.

The fervour that has been generated throughout the town by Wrexham’s first ever trip to Wembley demonstrates the enormous passion that exists for this 149-year old club; its history brought into context by constant reminders yesterday of the 150th anniversary of the birth of the Football Association. 20,000 Reds fans made the hazardous trip down south to Wembley, defying the unparalleled arctic conditions in North Wales – defying again the expectations that they would fold. 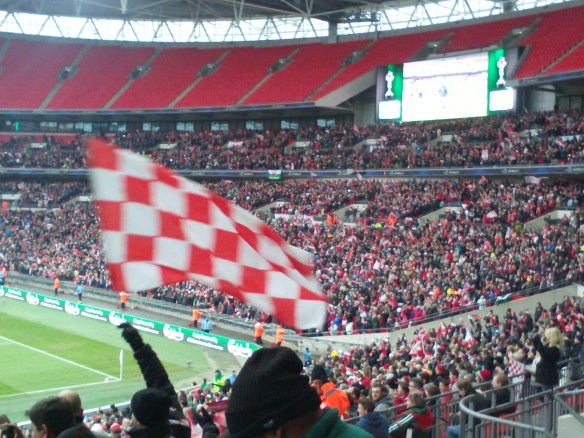 And so as the dust settles on the Wembley euphoria, and the Wrexham squad and supporters reflect on this lucrative cup run, attention must, and will, revert back to the league. The Football League is the bread and butter of this football club, and they deserve to benefit from the stability that can be gained from it.

Wrexham are due to receive a significant windfall from their exertions in the FA Trophy, but more bountiful treasure lies around the corner.

But, of course – how will Wrexham get there? It is no guarantee, for they are, once again, fighting a battle against the odds. The Blue Square Bet Premier League has resembled a free-for-all buffet this season, and no one side has been able to kick on and away from its challengers.

Only weeks ago five points separated the top five – Wrexham, Mansfield, Kidderminster, Grimsby and Newport – but the form of the latter two has disintegrated, whilst the South Walians have 10 remaining fixtures to schedule in less than a month.

Morrell has strengthened his hand with the loan arrivals of Dave Artell and Dele Adebola, but Wrexham’s league form has remained unpredictable. Whilst relentlessly scraping victories away from home – a last minute aberration at Dartford aside – their performances at the Racecourse have been underwhelming.

Morrell should view Wrexham’s dominant extra-time performance as a blueprint for the rest of this season. Grimsby were on their knees, yet the Dragons still found another level of performance that has barely been evident in recent weeks. Cieslewicz, Clarke, Harris, Hunt, and Keates all excelled, raising their game to dictate terms.

Cieslewicz shone throughout extra-time, and it becomes more and more difficult to empathise with Morrell’s mis-management of the Pole, who has not started a game since January 4th. 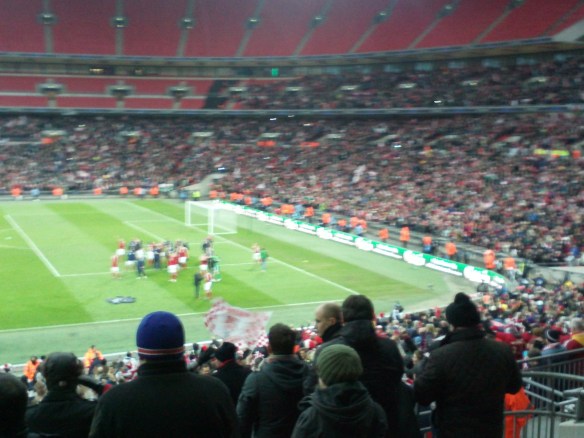 For all Morrell’s excellent work as Wrexham manager in the year and a half he has been in charge, there are moments of frustration – a nagging feeling that he can be better. His insistence on experience this season has hindered results at home when Wrexham have been required to break down obdurate opposition, whilst at times his inertia from the sidelines as second halves drift by has proved costly.

But at Wembley on Sunday afternoon Morrell’s changes were entirely vindicated. Cieslewicz, Ogleby and Clarke for himself, Ormerod and Thornton continually shifted the momentum.

Morrell often laments a lack of guile in his Wrexham team, but it is a sentiment that fails to draw sympathy when the enigmatic Pole sits forlornly on the sidelines, patiently biding his time and awaiting an opportunity to impress.

There is little more that he could have done in his hour long cameo on the Wembley plains; he glided across the pitch, weaving in and out of challenges, gazumping his star-struck opponents, and at times his team-mates. That he did not score was down to the superlative efforts of James McKeown in the Grimsby goal, than any shortcomings of his own. Simply put; he is a wonderful footballer to watch, hands down the best that Wrexham possess.

McKeown was a man possessed in extra time, pulling off save after save. As Grimsby crumbled during that half-hour period, surrendering to the onset of exhaustion, Wrexham soared. Defeat would have been a terrible injustice, but the significance of this victory can not be overstated, not merely for the silverware it brings.

Wrexham, now in their fifth season outside of the Football League, have fallen at the final hurdle twice before as promotion has beckoned. Luton Town have proved their nemesis since 2011. Now, in beating a significant rival in a showpiece event, after going a goal down with 20 minutes remaining, perhaps a psychological demon has been dismissed as the likelihood of another play-off tilt increases.

Many felt the LDV Vans Trophy triumph of 2005 could not be trumped, but it precipitated a downturn in fortunes. Staring into the abyss as they were eight years ago, success in Cardiff was followed by relegation just weeks later, a direct consequence of the club entering administration.