In his first article for The False Nine, Joshua Jalal looks at the development of Major League Soccer…

Back in 1988 FIFA awarded the fifteenth edition of the World Cup to the United States on the condition the USA established a new league following the collapse of the NASL. In 1996 the MLS was established. Despite its eighteen year existence, it was only in 2006 that the league was globally recognized by fans and other football organisations. Prior to that it consisted of several team collapses, financial constraints and poor domestic support. It was the laughing stock of professional football only exposed to football fans on ‘FIFA 2003′. But what happened in 2006? An agreement between a player, his brand and the MLS: David Beckham.

Since the Beckham move, the MLS has, unequivocally, grown from strength to strength. What was once considered a bold and money-driven move has in fact turned into a well calculated and well executed plan: attract a global player and brand and simultaneously increase the profile of the league. The league, in my opinion, is a a mixture of Championship teams playing in lower Premier League facilities.

The growth of the MLS is of course is down to another individual: the MLS commissioner, the Richard Scudamore of the MLS, Don Garber. Upon his appointment he has ensured the MLS acclimatised to European standards and elevated the game of “soccer”. It is hard to apply a single measurable way to analyse the growth of the MLS but particular elements and recent developments highlight the progression of the MLS: Rules were “Europeanised”; soccer specific stadiums have been planned and constructed; TV deals have been signed; attendances have increased; academies have been introduced and most importantly, the quality of the league has improved.

The first issue will perhaps illustrate the dire state the MLS was in and the rapid transformation that has taken place. In 1996, in the MLS’ inaugural season, the league and the profession was ‘Americanized’. The game consisted of traditional American sporting elements like timeouts and clock stoppages. For us it is unconceivable for the clock to stop when a free kick is been lined up, when the ball is kicked for a throw in or even a team calling a timeout, but for the Americans, it was what they knew and wanted.

Upon his appointment as commissioner however, Don Garber removed all “Americanized” elements, moving the game and the league in line with the global game. The bold rearrangement however had the potential to upset the relatively small but dedicated soccer fans: appeal to the global game or satisfy your domestic support? Thankfully, the soccer fans adjusted and are now more integrated into the global football world, watching different leagues from across the world.

My fascination and interest for the MLS surrounded its potential. It is very rare you get to see a sport establish and grow in a new and relatively financially prosperous environment. It is also rare to see so many teams plan and construct their own stadiums, but in the last five years numerous state-of-the-art stadiums have been financed, planned and constructed. Though the first soccer specific stadium (‘SSS’) was in 1999, the MLS have continued to encourage the development and construction of other ‘SSS’s. Unlike other American sports however, the MLS has concentrated on sustainability and financial efficiency rather than capacity and design.

They are not interested, at least not yet, in building an ‘American Wembley’. Instead they want to mirror the build, the simplicity and the sustainability of Swansea’s Liberty Stadium and Huddersfield’s John Smith’s Stadium. They do not want an empty 50,000 seater complex. Instead they want a full 20,000 seater stadium with the atmosphere of an Old Firm derby. As of 2012, 14 of the 19 teams play in and own a soccer specific stadium. My personal favourite is Sporting Park, home of Sporting Kansas FC which depicts the MLS approach of sustainability, simplicity and functionality rather well. Other teams are mirroring the continental designs seen in Spain with the Rio Tinto stadium of Real Salt Lake reminiscent of the Valencia’s Mestalla stadium but maintaining functionality and sustainability over design.

Now the majority of the league have their own stadiums, fans are able to experience the unique atmosphere only ever experienced during a football game. I have attended an ice hockey (NHL), basketball (NBA) and a baseball (MLB) game and neither have the same furore of a football game. Now the MLS has its own foundation of stadia and its own unique appeal. As a result, attendances have increased every year since 2006 with the 2012 regular season having a season high of around 18,000. With the league increasing its exposure, it is hoped league attendances will continue to grow.

Due to its rapid growth and exposure in the American media, namely the European transfers and construction of new stadia, the MLS has also agreed a new multi-million, multi-year TV deal with NBC worth a reported $10million a season. Of course the cost is nowhere near the $10billion invested in NFL TV rights but it again shows the progression of the league and soccer in America.

Don Garber: “This is a real step forward for M.L.S. and U.S. soccer. This is a world renown broadcaster known for production values and promotional expertise. That they are getting into soccer is a great statement about where the sport is today.”

The TV deal with NBC is at least laying the foundation for a long term future for soccer and the MLS. The sustainability of the league has already however been set, thanks, yet again, to Don Garber. He has introduced a strict financial model which has been aided by the introduction of shirt sponsorships, a first in American sports. The minimum shirt sponsorship is $500,000 though the league take $200,000 and reinvest across the league and grassroots operations. The LA Galaxy currently have the most lucrative deal in the league with ‘Herbalife’ which is worth a reported $44 million, demonstrating the financial credibility of the league and the faith corporate sponsors have in the longevity and stability of the MLS. 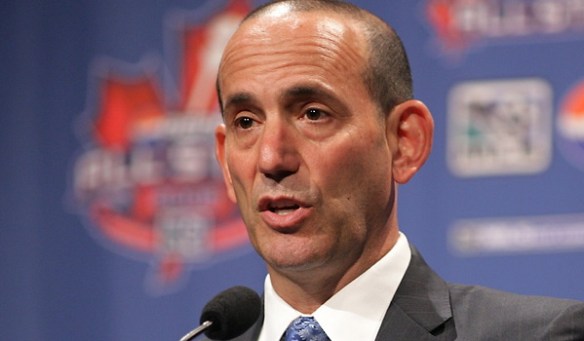 Don Garber: The “Richard Scudamore of the MLS”

The league however, due to the Beckham move, is recognized across the world as a ‘retirement league’. It is hard to deny this initial preconception with the likes of Thierry Henry, Alessandro Nesta, Marco Di Vaio and Torsten Frings playing in the league with an average age of 36 but, as previously mentioned, it was, and remains, a careful and well executed process with two core objectives: to improve the quality of the league for both the short and long term; to attract further recognition and credibility of the league and, secondly, to aid the growth and development of its young players and ultimately attract the next generation of fans to the MLS. The Beckham move was without doubt a high risk, high reward strategy that ultimately paid off; attendances, sponsorship deals and TV ratings for the LA Galaxy have all increased whilst Montreal Impact, which includes Alessandro Nesta in its ranks, have established themselves one of the best supported teams in the league.

Despite its admirable rate of growth in recent years, the league will, unfortunately, face inevitable stumbling blocks that threaten to derail its development and growth. The primary concern surrounds the sustainability of the league’s chosen vehicle of youth-growth development. Currently the league has concentrated on the investment of youth, developing young homegrown talent who will then, in turn, increase the quality of the league and the national team.

The issue however is, due to the high quality of youth development and concentrated investment, many of these players are now attracting the attention of European clubs and opting to forgo the opportunity to play in the MLS and seek their quest to play European football. Recent examples include Jozy Altidore, of AZ Alkmaar; Geoff Cameron of Stoke City and Paolo DelPiccolo who has recently signed for Eintracht Frankfurt without playing an MLS game. Other homegrown talents include Graham Zusi of Sporting Kansas City who trialled with West Ham while Stoke continue to look across the Atlantic for talent luring Cameron’s international teammates Maurice Edu and Brek Shea.

By leaving the MLS these players are inadvertently limiting the growth of the league.  Although the league is showing signs of strengthening it remains heavily reliant on these young players who are instead, and understandably so, seeking their own success over the success of the league. Another concern is the threat of other international leagues, primarily the Chinese Super League and the Australian A-League, both presenting other opportunities to ageing European stars. Recent examples include Didier Drogba, who subsequently joining Shanghai Shenhua and Alessandro Del Piero who joined Sydney FC.

In December 2012, the league faced further scrutiny when Sepp Blatter unexpectedly criticized the MLS in an interview with Al Jazeera. He attacked the league’s sustainable steady development, highlighting the league’s failure, despite its 20-year existence, to present a legitimate threat to the mainstream American sports.

Blatter: “It is a question of time, I thought — we had the World Cup in 1994. But it is now 18 years in so it should have been done by now. But they are still struggling.”

Another issue addressed by Blatter’s interview with Al Jazeera surrounding the much discussed scheduling. Blatter continues to argue the importance of the MLS adopting the international calendar:

“They have to play and adapt themselves to the international calendar…If they do that, they can have success.”

I however disagree with Sepp Blatter’s issue. Soccer is yet to be considered a mainstream sport despite coming second in all American attendances. It has to work around the schedule of the most popular sports: American football, baseball and basketball whilst the league and the sport still secure a large enough and devoted fanbase. The NBA, for example, secured the majority of 16-25’s during the 1980s and the MLS needs to do something similar with the current generation. By scheduling the season alongside the NFL, NBA and MLB, the opportunity to increase its fanbase will be practically non-existent.

The MLS, since its establishment has experienced a radical overhaul. Its dedication to establish a long term league and aid the growth of the sport is commendable but remains a long and delicate process. It needs to secure the next generation of fans to sustain its growth and current level of operations as well as nurture the current level of support. The recent TV deals and continuing sponsorship is a positive sign and emphasises the league’s slow and steady approach whilst the soccer specific stadiums will surely aid the process. It is clear though that the league still has work to do, but if it continues at its current rate the league will sooner rather than later become a respected and established major league in America and the world.