For his opening campaign he was everywhere, a one-man dynamo who additionally possessed the priceless ability to gauge exactly where a referee’s line in the sand was. Time and again we saw it, an early cruncher earning a warning followed by a series of mini-crunchers that tested the official’s tolerance but rarely resulted in a card. For such a tenacious, scrappy player it really is a gift. END_OF_DOCUMENT_TOKEN_TO_BE_REPLACED

Is this the pick of the round? It may not have the glamour of Manchester United versus Real Madrid or the history of Barcelona versus Milan, but there is a certain something about Shakhtar Donetsk and Borussia Dortmund this season that can be difficult to put your finger on. The tie has a special feel to it. Both teams have flown, rather unfairly, under the radar for the last couple of seasons only to fully announce themselves in this year’s group stage by knocking out much higher profile opposition. END_OF_DOCUMENT_TOKEN_TO_BE_REPLACED 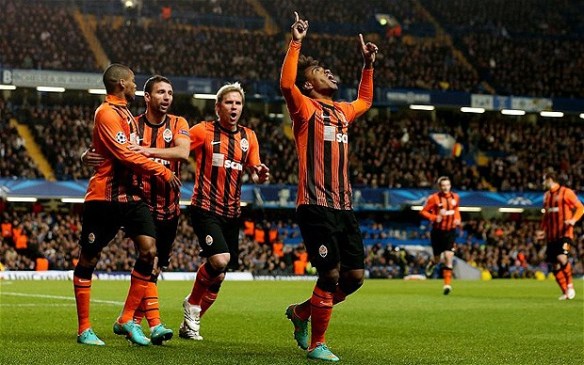 In recent years, Ukrainian teams have been able to entice some real quality from abroad. No one has benefited from foreign players more than Shakhtar Donetsk, who last season won the league for the third year in a row. Shakhtar were nowhere near as prominent in the old Soviet system as arch-rivals Dynamo Kiev, and spent much of the first decade in the new Ukrainian league playing second-fiddle to their auspicious rivals. END_OF_DOCUMENT_TOKEN_TO_BE_REPLACED

Towards the end of the Russian Empire, vast amounts of British industrialists seized upon the unrest in the region by opening factories, mills and mines in previously hostile areas of Eastern Europe. Needing the pioneering expertise of British workers to come with them on this journey, the businessmen brought much of their workforce along. END_OF_DOCUMENT_TOKEN_TO_BE_REPLACED