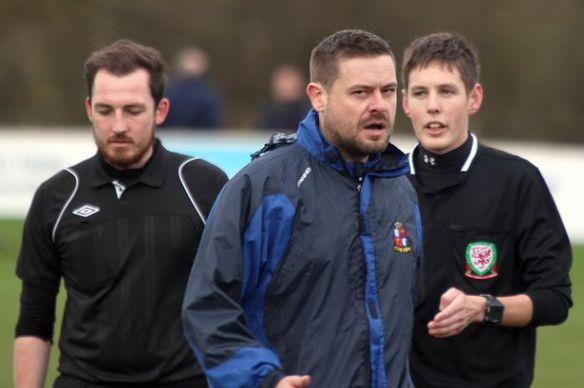 Mold Alexandra play attacking, attractive football under their progressive young Liverpudlian coach, which makes their success even more astonishing when you consider the factors against them.

“For us to join a club with no money to spend, no players, no coaching staff, no experience personally of the league and limited knowledge of Welsh football with limited contacts and a side that had an average age of 21 it is in my opinion an amazing achievement to win the league within two to three years – to do so first time round I genuinely feel is one of the best achievements in the top-three tiers of Welsh football.”

Over-achievement, in terms of outperforming your expected correlation between finance and league position, is possible. Southampton have shown that on the higher stage this season, Bournemouth below them, and Mold Alexandra on one of the lowest, but these clubs are outliers.

The state of English football – and British football for that matter as it all falls under the same blanket – and its future is a subject debated endlessly every year. Much of it focussing on the negatives – of which there are a lot. Negatives which resulted in an expensive and time-consuming FA Commission which last year put together a set of proposals that included, but did not lead with, the formation of League 3.

That idea has since been nipped in the bud. But it raised an issue that needs addressing, and one that the League 3 debate was simply a smokescreen for: the real structural, cultural and material problems holding back the development of young English footballers. With the government continuing to cut investment in sport and keen to let clubs remain autonomous, the cost of coaching badges continues to be several times the amount in Spain, Germany, France and Italy.

Germany leads the way and no surprise. The World Champions laid the foundations for their current success a generation ago and have reaped the benefit in recent years. Its root is, no surprise, in coaching and innovation.

The Bundesliga has recently allowed clubs to abolish their B teams. TSG 1899 Hoffenheim, however, have opted not do that, with Peters Bernhard, Director of Sport and Youth Academy saying: “The infrastructure for our U23-team is extraordinary and we are fully convinced that this team has a positive influence on our pro team. The transition from performance to high-performance-sports is the biggest step in the development of a young player.”

Alexander Rosen, Director of Professional Football at the club adds: “Our U23-Squad is a perfect place for our most talented young players to gain important playing time. We never even thought about cancelling this team since there are a number of players that have made it to our Bundesliga team straight out of the U23-Squad.”

Rogers argues that coaching should be the focus of any revolution in grass-roots football or development of young talent in this country, and that at the moment it is not the priority it should be. He himself has a UEFA license and is a licensed coach with the FA, but he describes the cost of the badges as “ludicrous”.

“Ultimately the question comes down to, who, or what, makes a good coach? They’re teachers, who understand the curriculum, who know the lesson plan and know the end exam. It’s a case of saying “Can I teach that? How do I motivate them?” To spot who’s done something wrong and correcting them.

“Coaching licences should be proper qualifications, like a university degree, as challenging and as rewarding as training to become a lawyer or a doctor.”

Alongside the imperative need to improve the standard of coaching and normalise the pricing of the qualification is a cultural change; that well-known “jobs for the boys” mentality. As Rogers noted: “At Everton they have Alan Stubbs, Duncan Ferguson and David Unsworth in the youth setup. They’ve not headhunted the top people. At Liverpool it’s Robbie Fowler, Steve McManaman and Jason McAteer. The mentality is “Who are my mates from football? Who can I get in?””

Aside from the coaching aspect is the issue of developing young players into the senior game. As Hugo Greenhalgh argued in the case of Andy Kellett there is a clear disparity between the aims of the U21 game and its results. The loan system is seen as a chance to bypass that stage, but by no means guarantees success despite the attitude that any kind of first-team football is superior to youth football.

Rogers speaks of those youngsters stuck in that gap between the ages of 16 and 21 as “stray cats”, and there is a logic to it. He says: “The best youngsters, Raheem Sterling, Wayne Rooney and Steven Gerrard get to where they are without youth coaching, because they’re so good at that age. They then go to a big manager, who notices at a professional level that there are gaps missing, because the standards of coaching between 15 and 18 are not good enough.

“If you’re a big club, will you risk a young player of yours picking up bad habits from a League 1 or League 2 dressing room? They’re not clean living enough. They play horrendous football, the training is pre-historic. Would you want your best young players going there for 12 months, loaned away from the family and where they live with the false belief that it will toughen them up?”

Sam Cox is a 24 year-old footballer who earned his first professional contract as an 18 year-old at Tottenham Hotspur in 2008. He now plays for Boreham Wood in the Conference South, dropping out of the Football League within two years of earning that contract at Spurs; a career trajectory that is sadly all too common. During those two years he was handed a one-year contract at Barnet, but struggled to gain game time because he was a 19 year-old who the club felt couldn’t be trusted in a relegation battle.

As everything in English football seems to be, it is governed by rampant short-termism. The threat of the sack looms over almost every single manager in the Football League – there have been 37 managerial changes amongst the 92 clubs already this season – and so survival takes priority over the development of young talent. As Rogers puts it, “clubs want experience rather than innovation.”

To his credit, Cox has stabilised his career two divisions below the Football League, but he maintains he is “100% certain” that League 3 and the introduction of B teams would have helped develop his game at Tottenham. He said: “The Professional U21 Development League was established in 2012, after I’d left. I had a hard age group and had to really graft to earn my professional contract. The boys below me were handed out generous contracts to fill out these U21 squads. They’re given more time to develop and mature. I wasn’t allowed to as a 19-year old in the hustle and bustle of a relegation battle.

“I do think staying at a top club longer is beneficial, to develop them in the league. We can’t yet tell if the U21 League has helped, but i know it’s worked a lot better than what was around when I was a reserve player. Looking at it from an outside perspective, I would’ve loved to have had that two or three years of developing myself.”

Circumstance played against Cox, but his is not an isolated case by far – and he is one of the lucky ones as James Gheerbrant found when he spoke to other rejected footballers – and feeds into the overarching systematic and cultural deficiencies in the English game. Rogers tells of a time that he visited the £105million St. George’s Park – the Football Association’s new centre of excellence – in 2013, where the Spanish Federation delivered a one-hour training session with Derby County U18 team.

The visiting Spaniards “manipulated team spirit” and played fun themed games that were all centred on pace and speed of thought. As Roy Hodgson then delivered his own coaching session it began with a long goal kick – one of the youngsters asked, audibly, whether someone wanted to take his place.

That “diabolical” episode as Rogers called it is emblematic of the problem of the coaching in this country. You can throw hundreds of millions of pounds at state-of-the-art facilities, but what effect will they have if the ideas and philosophies implemented remain archaic and rigid? The Mold Alexandra boss cites the need for a database where Premier League clubs volunteer basic training techniques that can be made widely available, and the need for a consistent development programme at academies from the age of eight to 18. Rogers jumped through the FA’s hoops but he admits to not using a single one of their coaching guidelines.

It is an issue of mentality that must be overcome first, before the effects of better coaching and better use of player development can be fully reached: “English players are human beings, so are Spaniards. They’re not born in a way where they play football in a technical manner, it’s all about what you are asking them to repeat. The flair is coached out of them.”

State of the Game Part 1: Andy Kellett & the Under 21 Premier League