Why has it taken the best part of seven years for it to be the case that the two richest clubs in the league are unequivocally significantly better-equipped and now destined to carve up the next five league titles between themselves? It says as much about the sheer force of will of Sir Alex Ferguson to sustain Manchester United up until his retirement, and the freak of nature that was Liverpool’s 2013-14 season, as it does the failure of the two super-clubs to stamp down their muscle.

The relationship between money and success in football has become a no-brainer in modern times, and Paul Tomkins leads the research in arguing that there is a direct correlation. A quick look at two graphs produced for an article from November last year titled “Why Liverpool Never Win the League” show that distinct relationship between average cost of first elevens and squads to league positions. 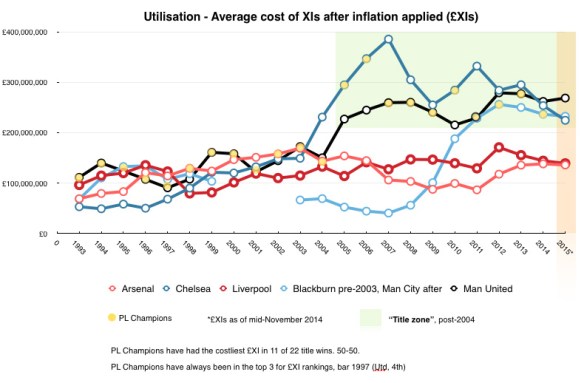 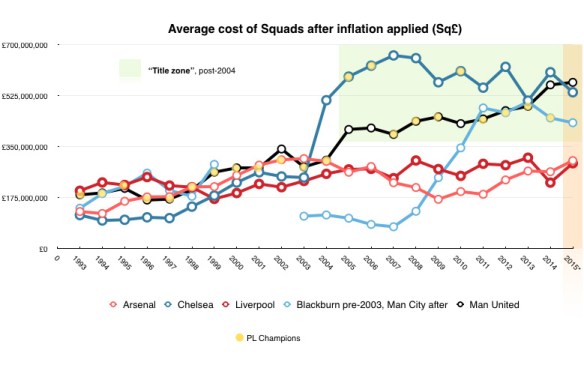 It demonstrates how far ahead of the curve Chelsea and Man City have reached, to the extent that Financial Fair Play merely maintains the status quo rather than sparking a bottom-up revolution. It shows too why Man United’s recent dip would have to become a prolonged malaise for them to disappear from the title conversation in the next few years.

For Liverpool and Arsenal, it illustrates how much thinking outside of the box they have to do to compete. If you play them at their own game, you will lose. On The Anfield Wrap podcast Neil Atkinson bangs on every week about buying goals, about improving your performance in both boxes being the only way to compete with the two behemoths at the top. It’s a fundamentalist view point but not without merit.

That is how Liverpool got so close last season, by design or by accident, by playing by their own rules and their own way. Sacrificing solidity for goals. It very nearly worked, while Brendan Rodgers’ attempt to normalise Liverpool earlier in the season by sacrificing goals for solidity failed spectacularly. Over in Spain, Atletico Madrid continue to defy the odds and the suffocating effects of Real Madrid and Barcelona on the rest of the league. That is a remarkable story that shows no signs of slowing down, if the two-legged Copa del Rey victory over Real is any indicator.

But closer to home, the Premier League has thus far resisted the threat of becoming a duopoly in the sense that, traditionally, the Scottish Premier League and La Liga have been. Now, though, is Year Zero. But back to that question – why has it taken this long?

The inevitability of Manchester City’s first Premier League title was an accepted truth come the morning of Tuesday 2 September, 2008, with the pockets of Abu Dhabi United Group £30million lighter but the club a Robinho greater. Those first few transitional seasons were textbook in learning courses; prizing the best talent from league rivals in the hope of usurping them, before the continental plunge.

It was Christian Bale’s Bruce Wayne in Batman Begins. Though instead of traveling the world to learn new skills and abilities to confront injustice, the club have travelled the world to find new ways of beating loopholes in Financial Fair Play and third party ownership. Those years of learning what it takes to be a big club in English football have resulted not just in a Premier League title but the plans for a £200million state-of-the-art academy – their very own Batcave.

You don’t arrive organically at the finished article overnight – Bruce Wayne didn’t become Batman upon leaving Gotham, or from finishing his training with Ra’s al Ghul, but after that. Just like City’s metamorphosis into the club they are today took planning and stages. In 2008 the Champions League cartel of Man United, Chelsea, Liverpool and Arsenal was at its strongest – City could not expect to break that up without years of hard work – and despite Liverpool’s fall it was not they who initially profited.

The short-term prospects may be scratchy, with an ageing squad with a questionable mentality and a faltering title bid, but if they can crack Europe this season in the same way Batman cracked the mafia mob, then the long-term prospects will surely improve. 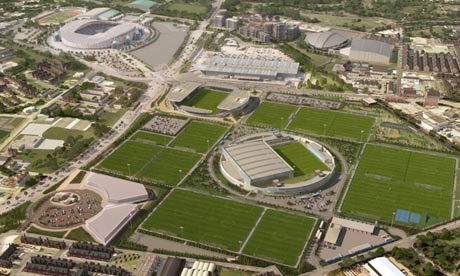 For Chelsea the path since 2008, and during City’s nascent years of wealth, has been a story of success, regression and a rise again back from the dead. The rise of Manchester City was one of their own creation, like the Joker was a creation of Batman’s, whilst the heavy spending of Roman Abramovich’s early years led to a natural winding back between 2009 and 2012.

Burned by the effects of their own success they were like Bruce Wayne at the beginning of Dark Knight Rises – the wilderness years – withdrawn from public life and frivolous spending. Chelsea were directionless in the transfer market and rudderless behind the scenes, lurching from one managerial project to the next but retaining the mentality and reputation that had been moulded during the Jose Mourinho years, like Wayne holed up in his Manor.

Stung into action by the consequences that could have befallen them when they finished sixth in 2012 – like Bruce Wayne when Bane bankrupt Wayne Enterprises – player recruitment has been hugely successful since, and a sense of long-term direction behind the scenes restored. Whether the effects of their return to the top of the pyramid in English football will lead one of John Terry, Abramovich or Mourinho to fake their own death and live in self-exile remains to be seen.

While the tenuous links to Christopher Nolan’s character development of Bruce Wayne during the Dark Knight Trilogy may end there, and while Chelsea and Manchester City’s respective rises to the top have encountered more resistance than they expected, few can deny they both sit on the cusp of dominating English football.

Behind the scenes both clubs have long-term security and a system in place to bear the fruits of wise investment. People scoffed at Manchester City’s “holistic” approach to managerial recruitment in 2013, but their new academy is the embodiment of that blueprint. Like Batman they may prove susceptible in the short-term to the clever tactics of clubs immediately beneath them, but they will ultimately have the last laugh.

3 thoughts on “Why is this the first Manchester City and Chelsea title race?”