“But he’s the current Manchester United manager” I hear you say. Yes, that’s true – but can you prove he’s not dead? I very much doubt it. The following is five reasons why we believe he might be dead.

Despite being reportedly alive and 63 years old, Louis Van Gaal does look quite dead. Remember Babs from Chicken Run? Well, Babs looked dead and Louis looks just like her. He also looks like that premier Nazi guy who melts in that Indiana Jones movie. Unfortunately, we haven’t been able to smell him, but he definitely looks dead, and we’re happy to use that as evidence.

2. He thinks no one can see him

As shown in this photograph below, Louis Van Gaal appears to believe that nobody can see him. He takes this opportunity to stare right into the breast area of a Fox News reporter. Do you really think a man of 63 years wouldn’t be aware of when was and wasn’t an appropriate time for boob-gazing? Only someone who thought they were invisible would do this, and only dead people are invisible. 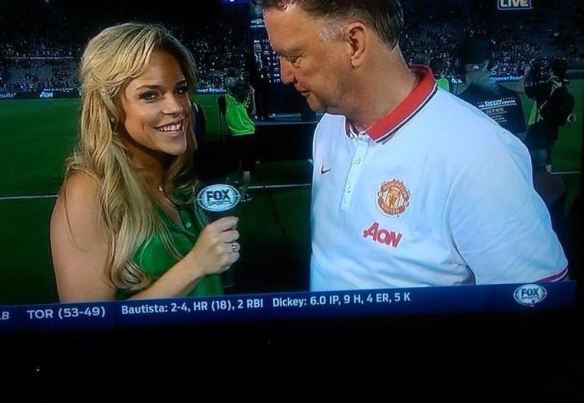 3. He has nothing to lose

Or at least he acts like it. What self-respecting manager wouldn’t add more than Marcos Rojo to the Manchester United defensive department? Clearly only a man with nothing left to lose would spend all the club’s money bolstering an already glamorous attacking line-up, and then play Chris Smalling at the back. The Dutchman has also made an impression with the media. He often responds truthfully to questioning, and has been called ‘refreshing’ on a number of occasions. Who has nothing to gain from the press? Who no longer feels the need to lie? Dead people. Dead people don’t lie, because what would be the point. They’re dead.

4. He’s lost all concept of time

After his team lost to Swansea on the opening day of the season, Van Gaal told the journalists to judge him in three months time. Three months down the line, the manager dismissed this suggestion, claiming it was stupid of him to say it in the first place – before saying that it was impossible to put a date on it. You know when time doesn’t matter? When you’re dead.

He’s a bit weird isn’t he. You might describe him as wacky. Self-important perhaps. In my opinion, this is exactly the sort of joke he’d play on us. Wouldn’t it suit him to actually be dead right now, and none of us knowing it. How he’d laugh, to be dead right now. You know, I don’t think it’s a stretch to say that not many people would actually be surprised if he was dead right now. It just makes sense that he’s dead.