Many other clubs have had surprise transfers over the years, but I would argue that perhaps none beat the shock in August 2001 when my team Portsmouth FC signed Robert Prosinecki.  Portsea Island shook itself a few further yards further from the mainland; such was the tremor of excitement that spread across the city when Pompey’s Serbian-American owner, Milan Mandaric, announced he had managed to persuade his Croatian “friend” to move to the South Coast.

To put this signing into context, Pompey had just completed their 13th successive season in the second tier of English football, just escaping relegation on the last day of the season, and had only enjoyed one season in the top division since 1959.  It would be fair to say that not even the most optimistic fan expected the ex-Real Madrid and Barcelona attacking midfielder to walk onto the Fratton Park turf in the late summer of 2001.

This was a man who was named the Best Young Player when he starred and scored for Yugoslavia at the 1990 World Cup.  Eight years later, he became the only player to score for two different countries in a World Cup Finals when he netted twice for Croatia in France, one to defeat Netherlands to finish third.  He arrived at Fratton Park from Standard Liege aged 32, so a move to a mid-table Premier league side would have been expected.  Perhaps the 20, 40 or 60-a-day smoking habit (depending on the size of the rumour you choose to believe) and his less than svelte appearance put other teams off.

Prosinecki took the number 8 shirt off the back of Mladen “Turbo” Rudonja (more on him later) and slotted into a team that was young and committed, but unproven.  Several one-man shows live in the memory from the 2001/02 season.  The August Bank Holiday 4-2 win over Grimsby is still known to some as “the Prosinecki game”.  I don’t think I will have the privilege of witnessing such a mesmerising display from one player ever again. He treated his opponents with complete disdain, as if he was up against a school team. He placed the ball into any part of the park at will and had a hand in all four goals.  It was also the first time I saw him manage to floor an opponent (or two) without touching them or even the ball.  A dip of the shoulder and a step-over was all that was required to put the poor unsuspecting defender onto his backside. This is a trick he would repeat throughout the season.

Sadly, it soon became clear that his young teammates were not quite up to the standard the Croatian magician perhaps had expected. There were defence splitting passes that unfortunately would leave a young Peter Crouch and Mark Burchill just as surprised as the defenders. Wingers Kevin Harper and Courtney Pitt were left confused as to when to run or hold.  His unkempt hair was left in a tangle after every game, due to the amount of times he tugged at it after another chance was wasted.

By January, and after four defeats on the bounce, Prosi (yes, a rather unfortunate nickname) clearly decided that there wasn’t much point being a team player anymore.  He took the situation into his own hands and would just get the ball and try and beat the opposition on his own.  Six goals in four games should have been a fillip for the struggling Blues, but this still only led to one win.  Unfortunately for Prosi, the goals were still flying in at the other end.

A sublime hat-trick at home to Barnsley surely should have seen 3 points in the bag, but the hapless home defence also let in four.  Prosi was rumoured to have left the ground unshowered barging his way past home fans complaining about a wasted hat-trick.  Pompey and Prosi’s season petered out in the remaining months, producing only one more goal for the absurdly talented Croatian, and Pompey finished a customary 17th.  These remaining months left me feeling a little cheated.  We had seen the magic he could produce, seemingly at a whim, so the decline was even more frustrating.

His form, however, was still enough to earn a call-up for the 2002 World Cup, but he was not to repeat the magic of 1990 and 1998.  He lasted only a half before being withdrawn in Croatia’s first game.  His spirit perhaps drained after 35 games in the English second tier! He didn’t return to Pompey for a second season. Harry Redknapp had taken over managerial responsibilities and incredibly managed to attract Paul Merson into the creative midfielder position…but that is another story.

I couldn’t let it end like this. Prosi had left me bewildered and dazed enough in the season to make him my favourite player to pull on the Royal Blue. I needed to track him down and say thank you for the joy he brought to thousands of True Blues in his mere 35 games. A cheap flight to France, a train across Italy, and I found myself in Slovenia. The magician had decided to wind down his career in the relative backwaters of the Slovenian first division for Olimpija Ljubljana.  He would be joined by ‘Turbo’ Rudonja (remember him from earlier?), known to Pompey fans a lightweight or to Slovenians as a football legend after scoring the goal that qualified their country for the 2002 World Cup.

I hung my Pompey flag during the game, which lead to Rudi hunting me down after the game. He was extremely pleasant and full of praise for the club, but to be frank his 14 appearances spread over two seasons hadn’t really got my pulse racing. I was of course hanging around for my hero to appear. The result this time meant that he had decided to have a shower, and take his time over it. I left Rudi mid-sentence when Prosi walked out of the ground. I managed to get the customary photo, and exchange a few pleasantries about what a player he was. He replied in his broken English about how amazing our fans were. I’m not entirely sure what I was expecting. His mesmerising feats on the football pitch perhaps left me with the ridiculous notion that this would translate into an exchange of such philosophical depth that it would leave me with the perfect movie ending to a whirlwind year of football fandom.  It wasn’t to be quite like that, as that’s not how life works. 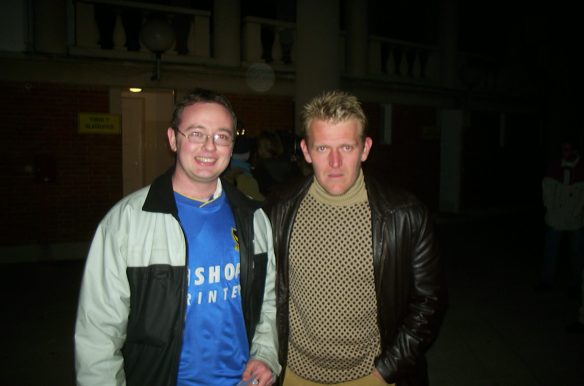 So, it was back to Portsmouth for another season.  Mark Burchill had taken the number 8 shirt.  Nothing against Burchill – a fine pacy forward player that was unfortunately blighted by injury, but I think the often recited football song “you’re not fit to wear the shirt” was definitely appropriate. Fortunately, the rest of the team in 2002/03 had been significantly strengthened and a Prosi-less Pompey converted 17th into a first place finish.