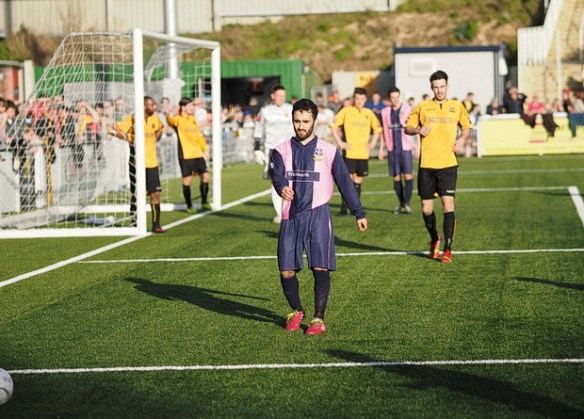 I heard a rumour, Erhun Oztumer, He came Turkey, To bring us joy

It is with some sadness that I write of the departure of Erhun Oztumer from Dulwich Hamlet to Peterborough United this summer. For the past two seasons, Oztumer has been the lynchpin of Gavin Rose’s slick Dulwich side who have garnered something of a reputation for attractive, attacking football. No player illustrates this better than Oztumer; his first touch is sublime, his vision is excellent and he is equally adept at beating his man as he is at finding a killer through-ball. He helped Dulwich win the Ryman Division One South in 2013 and last season scored 33 goals as Dulwich chased successive promotions, only to miss out on the final day.

But Oztumer isn’t the sort of player you need to scramble for the stats book for (if you did, you’d see he’s also provided 18 assists last season). He is simply a very pure and talented footballer who knows how to use his skills effectively. For two years, he has been the star attraction at Champion Hill and he will be dearly missed.

Oztumer is a typical case study of England’s preference for physicality over technique. Released by Charlton at the age of 16 because he was deemed too small, he went to play in Turkey for a few years for Manisaspor and Sivasspor in the top flight. However, he grew homesick and returned to England, where (after international clearance) he signed for Dulwich Hamlet.

On a glorious spring afternoon this April, the final day of the season, Dulwich faced South London opposition Kingstonian, knowing that a win would see them swap places with them in the playoffs. Oztumer had just returned to the side having picked up an injury in the League run-in. It was no coincidence that Dulwich’s form dipped when he was out of the side, but he had played well in the previous game and scored the only goal with a coolly-taken finish at Hampton & Richmond.

In front of a bumper crowd at Champion Hill, Dulwich took an early lead through a goal from player, coach and all-round talisman, Kevin James. As the cliché goes though, they had almost scored too early and when Kingstonian equalised in the second half, Dulwich never really looked like scoring another.

No one tried harder to change that than Oztumer. Like a man possessed, he darted around the pitch, trying to use his quality to haul his team across the line. He was destined to leave Dulwich that summer, having already gone on trial at Burnley earlier in the season, and he was determined to give something back to Rose, the manager who had given him a second chance and the Dulwich fans who adored him. It wasn’t to be though and still carrying a knock, he couldn’t find a way to break through a resilient Kingstonian defence.

Oztumer was typically humble after the game, thanking the fans for all their support over his two seasons at the club. “Dulwich Hamlet will always be in my heart”, he told me. He was adored at the club, immortalised in song and had his name made into a decorative mural at the far wall of Champion Hill. Now there is a sense of satisfaction amongst Dulwich fans, the feeling that ‘we knew him before he was famous‘. Like the civic pride of a local band storming the charts, the day Oztumer makes his Football League debut for Peterborough will be a happy one.

It has been a calculated move on Oztumer’s part. The diminutive playmaker had the chance to move to several Conference clubs last season but chose to stay at Dulwich, where regular football was guaranteed and he knew he was valued. There was serious talk of a move to Luton in May and it would have made sense; John Still has a great reputation of spotting and nurturing non-league talent in to effective lower-league sides.

However, when Peterborough swooped in (seemingly from nowhere), it was a no-brainer for Oztumer. Not only were they a division higher than the other interested clubs, they have a strong track record themselves of using non-league players, several of whom have gone on to bigger things. Indeed, London Road has proved a valuable stepping stone between non-league and the upper echelons of the Football League, and beyond.

The deadly trio of Craig Mackail-Smith, George Boyd and Aaron McLean, who helped Peterborough to back-to-back promotions between 2007 and 2009, stand as great examples for Oztumer. All three were playing in the Conference when Peterborough signed them and have gone on to play in the Premier League or Championship.

More recently, Lee Tomlin’s story can inspire Oztumer. Tomlin arrived at Peterborough from Rushden & Diamonds in 2010. He is a similar player to Oztumer and both are attacking midfielders with an eye for creativity and goals. Still in his early 20s, Tomlin matured as a player whilst at the Posh as he came up to speed with League football. This January he signed for Middlesbrough on loan, before being signing a permanent long-term deal. With four goals in 15 appearances, his introduction to life in the Championship has been promising.

For now, Oztumer will surely be happy where he is. Darren Ferguson has offered him a show of faith by handing the number 10 shirt (the same number he wore at Dulwich); he stood out in Peterborough’s first preseason friendly against Barnet and scored on Tuesday night against St. Neots. However, such is his talent and the environment at London Road conducive to progress, his rise doesn’t have to stop at League One.