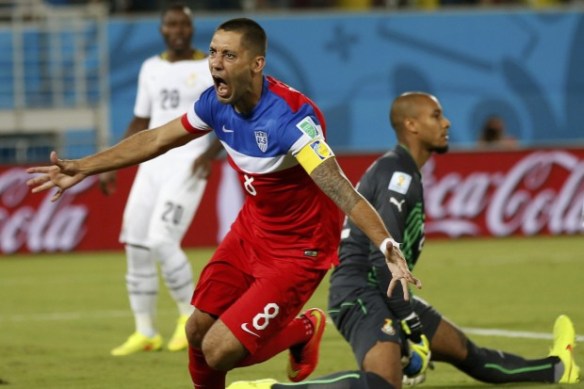 Americans are no strangers to rivalries either – ask any hockey fan and they’ll explain how nothing feels better than getting one over the Russians or the Canadians – and last night another ghost was laid to rest. Ghana may seem like an unlikely rival, given that the two countries have no historic problems and they are separated by oceans and thousands of miles, but the Black Stars have been a thorn in the side of the US soccer team for years, bettering them in the group stage in 2006 and knocking them out with a goal in extra time in 2010. Ghana were a demon in long need of exorcising. But last night the US rewrote history, triumphing under a siege of Alamo proportions and moving one giant leap closer to the initially unlikely progression from their “group of death”.

The atmosphere could be felt even through the television. Fans of the US had travelled in great numbers to watch their side in their opener in Natal, and were met with equally noisy and passionate Ghanaian support in the stadium. Following a turgid affair between Iran and Nigeria, the world was crying out for someone to put this goal-laden tournament back on the right track, and Clint Dempsey duly delivered. Receiving the ball on the left, Dempsey ran through a couple of defenders before side-footing a shot with his weaker foot into the far corner of the goal. With less than a minute on the clock, the US had taken a dramatic lead and forced even the most soccer-skeptic American fan to take note.

Jurgen Klinsmann had his side lined up with the diamond in midfield we’d come to expect following recent friendlies, with Jones and Bedoya offering the width whilst Bradley and Beckerman operated centrally. Yet throughout the first half Ghana looked to exploit the left hand side of the American defence, where former winger DaMarcus Beasley was operating as a left back. Fortunately, the combative Jermaine Jones was quick to try and shut down any threat from that side, tracking back in an attempt to nullify the threat of Atsu and Ayew.

Despite taking the lead, America’s hand was forced early on. Jozy Altidore, chasing a routine ball down the channel, unfortunately suffered a hamstring injury that signaled both the end of the game and the tournament for him and was replaced by the ‘Ice Man’, Aron Johannsson. All of a sudden, Klinsmann’s decision to drop Landon Donovan seemed a little rash; whilst Johannsson is a decent finisher, chasing down the ball and working hard is not in his repertoire, and though Wondolowski has been a loyal servant to the MLS it’s hard to envisage a situation where it would be beneficial to bring him on. Donovan does not have the physical edge that Altidore possesses but would offer something working the channels and working for the ball.

Ghana came at the US often, only to see attacks broken down by the impressive central defence partnership of Besler and Cameron. Yet tragedy struck again for the US with former All-American Besler forced off with another muscle problem, making way for John Brooks to make only his fifth international appearance. rate that made life harder for their African counterparts, disrupting their rhythm and making them know they would have to work especially hard to get something from the game.

Ghana were a better outfit once Boateng and Essien were brought into the fold, playing with a little more zip that made it difficult for the their opponents, who grew tired without the luxury of substitutes thanks for two first-half injury. Yet the breakthrough finally came; a typically incisive and quick move saw the impressive Gyan backheel the ball into the path of Ayew whom, with the outside of his left boot, fired past Tim Howard. A draw would have been no less than what the Ghanaians deserved, but there was to be another twist in the tail yet. 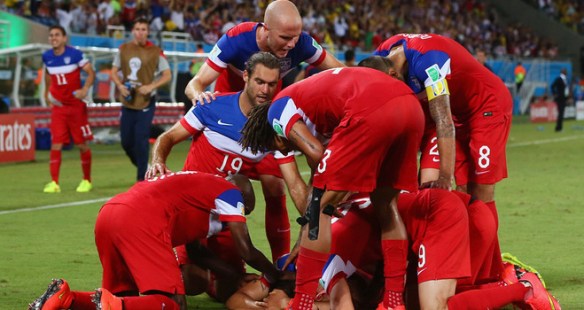 When it looked like Ghana could take advantage of tired legs and score again, the selfless industry of the US’s right back, Johnson, saw the US awarded a corner. Sporting Kansas City winger Graham Zusi, on as a substitute, whipped the ball into the box only for it to be met by Brooks. His reaction was priceless; disbelief, relief and sheer joy all rolled into one – a timely reminder of why we call this the beautiful game. Queue pandemonium from the stands and the bench. Despite 5 minutes of extra time added on, the USA held out and were rewarded with an invaluable three points.

Within the space of a few hours, the unlikely feat of qualification from the group suddenly became a distinct possibility. After seeing Portugal humbled by Germany and without their key defender Pepe for their game with the US, the US squad will be buoyed by the fact that a win will see them through and a draw may prove to be enough.

Whilst the game was attritional in places, you can’t help but feel this game will have gone a long way to making soccer popular in the US. The rivalry rhetoric, the Alamo-like resolve of being dominated in terms of shots and possession, the underdog tag and the birth of a hero – American’s love drama, and this game was nothing short of it. Despite Donovan’s late goal vs. Algeria in 2010 being seen as a “turning point” in US attitudes towards soccer, you can forgive them for not being convinced; it existed in and was followed by a pretty unspectacular World Cup. This was different; the free-scoring nature of this World Cup will appeal to Americans whose key criticism of the sport was that nothing really happens – though hopefully they didn’t watch the Iran-Nigeria game.

It wasn’t a glamorous performance by the US, and they’ll suffer from the injuries to Altidore and Besler. But heck, it was an important one. Fortune favoured the brave once more, and they will need to be brave again when they take on Portugal on Sunday.