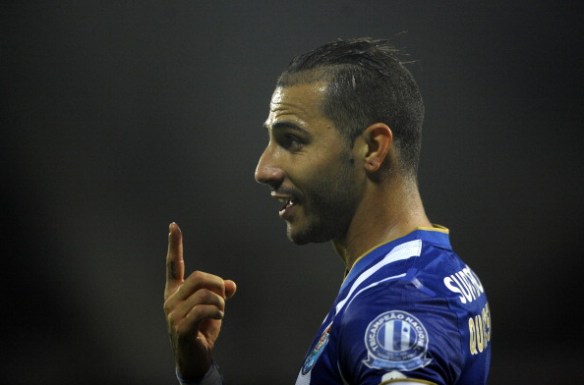 Ahead of Portugal’s opener against Germany, Hugo Greenhalgh looks at one player who didn’t make the cut…

Ever since the appointment of Jose Mourinho as Chelsea manager, there has been an obvious and sustained Portuguese imprint that lasted at the club for around a decade. The easily forgettable Filipe Oliveira predated his arrival, but he quickly brought in his able lieutenants from Porto, Ricardo Carvalho and Paulo Ferreira, while Tiago Mendes joined from Benfica. In 2006, Hilario was added as a back-up goalkeeper and two seasons later, after Mourinho had left, Jose Bosingwa and Deco were signed.

During that 2008/9 season, another Portuguese also joined the ranks on loan in the January window. A one-time prodigy, Ricardo Quaresma had been playing for Inter, incidentally under Mourinho, but his time in Italy had not been particularly happy. Very much a ‘style over substance’ player, Quaresma was criticised for his lack of effort and suffered the indignity of winning the Bidone d’Oro award for the worst footballer in Serie A for 2008.

Chelsea manager Luis Felipe Scolari had been struggling in his first season of English football, and the signing of Quaresma on deadline day seemed a desperate attempt to pull something out of the bag. Scolari was sacked a week later and Quaresma would only make four league appearances before returning to Inter. His time in the Premier League is a mere footnote or a Sporcle answer, in a bizarre career with more downs than ups.

Quaresma is almost the dark alter-ego of Cristiano Ronaldo, the anti-Ronaldo even. There was a time around ten years ago when you could mention the two in the same breath. They are both strong and handsome, pin-up boy footballers with a preference for well-groomed hair, tattoos and the number 7 shirt. Products of Sporting Lisbon’s academy, both burst onto the scene in the early noughties and were snapped up by European giants; Quaresma went to Barcelona, while Ronaldo of course was signed by Manchester United.

Quaresma had all the trickery, the skill and the talent to become a great player but seemed to lack the competitive, clinical state of mind that has made Ronaldo a world-beater and seen Quaresma resigned to European football’s graveyard shifts (and beyond), in a rapid fall from grace that has only recently starting to recover. A five minute highlight reel on Youtube could do little to separate the two; outrageous goals, an eye for the audacious and step-overs aplenty. While Quaresma trophy cabinet is surprisingly well-furnished (he was a member of Inter’s Treble-winning side and has won the Portuguese League four times), rarely has he made a personally imprint in the way Ronaldo repeatedly has done.

This year Quaresma underwent something of a redemption. After a difficult six months out of the game, following spells in Turkey at Besiktas and the UAE for Al Ahli, Quaresma was offered a lifeline at his former club Porto. He scored a number of key goals in their Europa League run, yet he still came under criticism for drifting out of games.

The major narrative of the UEFA World Cup Play-Offs was the battle of ‘Zlatan vs. Cristiano’. This rightly grabbed the headlines as a duel between two phenomenal players vying for a last chance at World Cup football. Given the personality and physiqueof both players it’s not unfeasible to suggest that either could play in 2018 (Ronaldo will be 33 and Ibrahimovic 36), but Brazil represented a final bow on the world stage for two players in their peak years.

It may seem churlish to suggest it but Portugal’s World Cup qualification offered something for Quaresma too. Playing back in his native country has perhaps grounded Quaresma for the first time in many years. Often treated as a luxury item for clubs with more money than sense, few coaches have really given him the chance to develop on the pitch, let alone mature off it. At Porto it finally seemed like he had been afforded both.

Yet it did not come to pass and Quaresma was not named in Paulo Bento’s final 23. The manager dropped a hint after the squad was announced on why Quaresma was left out, telling the press, “The players were chosen for what they could contribute from an attacking and a defensive point of view”. In what is set to be a tight and competitive group, could Quaresma have made a difference? If Portugal need a goal with 20 minutes to go, he’s exactly the sort of player who would be a handful against tired legs. There is a dearth of quality attacking options in the side, with the team heavily reliant on Ronaldo, and the likes of Hélder Postiga, Hugo Almeida and Eder hardly inspire confidence.

It therefore would appear that Bento has adopted a similar strategy to Didier Deschamps with his France squad. Ricardo Quaresma is a notoriously tricky character and Bento has played it safe by leaving him out, in the same way that Deschamps omitted the disruptive Samir Nasri to improve squad harmony. Portugal may well qualify from their tricky group without him but they’ll certainly lack the hutzpah he can offer.