Andy van der Meyde was born and bred in Arnhem, a medium sized town in the centre of the Netherlands. Yet it wasn’t Vitesse, his home town side, or any of the other clubs in the Arnhem area who spotted his talent when he was a boy. By some twist of faith, it was an Ajax scout.

Since Van der Meyde was a fan of Ajax as a boy, this was just as well and he dreamt of playing for Ajax, not Vitesse. In this regard, Van der Meyde and his famous fellow townsman Theo Janssen are from different planets. Janssen played at Ajax for one year before going back to Vitesse. Not because he wasn’t good enough, or anything like that. It was because he didn’t really like the Amsterdammers. He only joined them for the money. They were way too pompous and arrogant to love.

There were no such moral obligations for Van der Meyde. He loved Amsterdam, Ajax, and everything they stood for. He even loved living in Diemen, a grey suburb on the outskirts of the city, together with his mum (although this might have had something to do with his Arnhem based father – a mean and criminal drunk).

He made his debut for Ajax in 1997. His first couple of matches weren’t a success. Van der Meyde was too lightweight and lacked confidence. He was sent away on loan to FC Twente. After a year, he came back, now much stronger. He impressed Ajax manager Ronald Koeman, who made him a part of the Ajax team that reached the quarter final of the Champions League in the 2002-2003 season.

This team was Ajax’s best since the mid-90s. Players like Maxwell, Rafael Van der Vaart, Cristian Chivu and Zlatan Ibrahimovic made up the backbone. They were beaten by AC Milan, who would later go on to win the tournament, but only after a dramatic added time goal from the Italians.

Van der Meyde was the right winger. Zlatan the striker. Together, they scored goal after goal, especially in the Dutch league. But Van der Meyde and Zlatan weren’t just friends on the football pitch. They were best mates in real life as well. In his book I Zlatan, the Swedish striker states he wasn’t particularly fond of the Dutch players at Ajax. They were too arrogant, Zlatan reckons. But there was one exception: Andy van der Meyde. They were from similar, working class backgrounds and Zlatan could relate to him.

Putting Zlatan’s book and Van der Meyde’s biography (Geen Genade, only published in Dutch) together would probably cause the world’s most ardent drug takers and sex addicts to blush. Cocaine, loose girls, street racing on the highways of Amsterdam, it’s all there. In some scenes, confirmed mad man Mido makes a guess appearance. 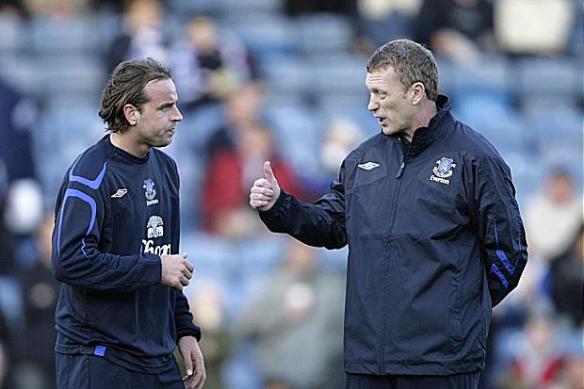 Later, Zlatan would go to Juventus, and Van der Meyde went to Inter. But while Zlatan flourished, Van der Meyde lost his swagger in Italy. It’s as if he reverted back to being the shy, young man he was before Ajax sent him to FC Twente on loan. He wasn’t able to fit in with the gentlemen and the half-gods.

Van der Meyde did even worse at Everton. When PSV signed him on a free transfer in 2010, he was obviously overweight. He didn’t make a single official appearance for the Eindhoven based side. When Van der Meyde released his biography Geen Genade in 2012, Dutch TV-program Voetbal International aired a genuinely touching promotional clip featuring Van der Meyde visiting his old friend Zlatan in Paris.

There they were, the Swedish god in Paris, and the bald, overweight winger from Arnhem. The two were very happy to see each other. You could tell the friendship was still there. But their lives had gone in such different directions.

“What happened?”, Zlatan taunted Van der Meyde, pointing towards the Dutchman’s stomach. It’s a good question. While both from a disadvantaged background, Zlatan was able to reach super stardom, while Andy van der Meyde nowadays features in a slightly vulgar Dutch reality TV-program that nobody seems to watch. The program shows Van der Meyde serving coffee in his wife’s hair salon in Arnhem.