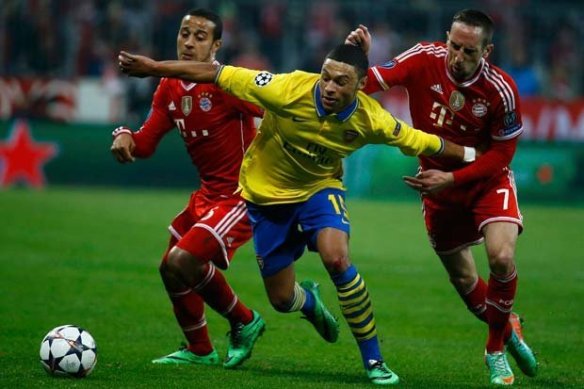 The midfielder has only recently returned from a lengthy period of time out on the side-lines which makes his performance even more impressive. With Roy Hodgson carefully monitoring players in varying competitions right up until he announces England’s World Cup squad, Oxlade-Chamberlain’s exploits against Bayern will certainly do him no harm at all. That game may well have just cemented his place in England’s squad to travel to Brazil.

Arsene Wenger started Oxlade-Chamberlain out wide against Bayern but midway through the first half he was switched into a more central area. This was a great tactical decision as the 20-year-old thrived; collecting the ball in deeper positions and driving up the pitch. It startled Bayern’s midfield base Bastian Schweinsteiger and Javi Martínez as Oxlade-Chamberlain’s direct running, close ball control and hunger to find a way into the box meant he drew a considerable amount of free-kicks (he was fouled five times) and in turn allowed Arsenal to move up the pitch.

According to WhoScored, he completed 10 successful dribbles – the pick of them a sparkling solo run past four Bayern players – and had 56 touches of the ball. Only Bacary Sagna and Santi Cazorla had more touches. It’s fair to say Oxlade-Chamberlain was heavily influential in Arsenal’s play, even if they weren’t able to turn over the 2-0 deficit from the first leg. This leaves Hodgson with some serious thinking to do.

Hodgson has been known in the past for favouring quite rigid, compact systems. At Fulham and West Brom he ensured his teams were well-organised and hard to break down. There wasn’t much room for the skilful ‘free roamer’ if you will. That player who more times than not will lose the ball but when a piece of trickery or long range shot does come off, its end result is devastating. There’s no doubt about it, England are expected to play rigidly at the World Cup.

This means Hodgson will have to be prudent with who he picks to play in the central positions. Wayne Rooney has the ‘free role’ in behind the frontman all to himself. However, it is difficult to narrow down who should feature in behind the attacking trio (presuming the formation is 4-2-3-1). If Oxlade-Chamberlain is to start he must fight off competition from the likes of Adam Lallana, Jack Wilshere, Tom Cleverly, James Milner, Frank Lampard and others. Steven Gerrard is assured of a spot in central midfield but the burning question is who partners him? Oxlade-Chamberlain excelled in a deeper role against Bayern but Gerrard also has a tendency to plough forward and this would leave substantial space in front of the defence for the opposition to exploit.

Something in Oxlade-Chamberlain’s favour is his versatility as he can play anywhere across the centre of the pitch. However, to play in a deeper role the position requires a certain degree of discipline and defensive awareness. There needs to be the correct balance between charging forward and sitting back to defend. It isn’t really in Oxlade-Chamberlain’s nature to jockey and put a foot in. One thing is for sure and that is his place on the plane is all but confirmed (it would have to take a disastrous injury to hinder his chances now). It’s just the issue of whether the youngster will be able to overcome the stiff competition which is up against him in those central areas. If he performs for England anything like he did against Bayern, then Oxlade-Chamberlain should continue to shine in Brazil.

Fearless approach is what the Three Lions require 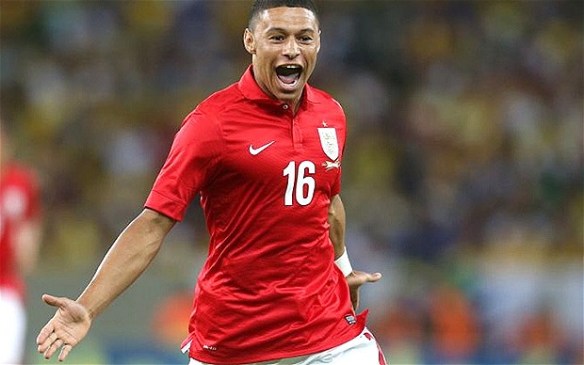 England will need as much guile and bravery as possible at the World Cup and Oxlade-Chamberlain provides that in abundance. Many a time England fans have bemoaned the lack of adventure and flair from the country’s forwards but in the Arsenal midfielder there is someone who will grab a game by the scruff of the neck. Against Bayern he proved how committed, daring and fearless he can be; unfazed by the selection of prima donnas packed into the Bayern midfield. Schweinsteiger who? Oxlade-Chamberlain simply didn’t care. Reputations mean nothing to him for he will take on anyone, and usually to avail.

His creativity could well be useful in those tight, nervy matches in Brazil (the final group game or knock-out showdown) when a bit of individual excellence is needed. England have lacked that over the years. Other nations at the tournament have a ‘maverick’ type player who can come up trumps late on; Lallana is the only other Englishman who comes close. We all remember when Chamberlain came on against Brazil in June last year and scored that goal from a way out to make it 1-1.

What we also must not forget is the player’s tireless running in the latter stages of games. The final 10-15 minutes are often pivotal and players mettle is tested to the maximum. Oxlade-Chamberlain is a fine athlete and willing runner who would have no problems with shutting down the opposition late on in matches.

Margins are everything in football, especially at a tournament like the World Cup. There will be times when England will have to be brave and throw everything forward. And that’s exactly when you want Oxlade-Chamberlain involved.

He can keep it too

By and large, England tend to lose possession pretty quickly. There are very few Englishmen who can actually keep the ball, shield it in tight areas and use it to effect. Oxlade-Chamberlain’s season in the Premier League has been blighted by a torrid knee injury but when he’s played, he has completed 169 of 202 attempted passes (83.7%). That’s impressive. He doesn’t give the ball away cheaply and that is essential at the World Cup. The heat will be intense and chasing after the ball will have a negative effect on the players.

So, taking these factors into account, Oxlade-Chamberlain clearly warrants a place in the England squad. It is up to Hodgson to work out how to accommodate him but his outstanding performance in the Champions League in midweek has only aided his chances of securing a first-team place.