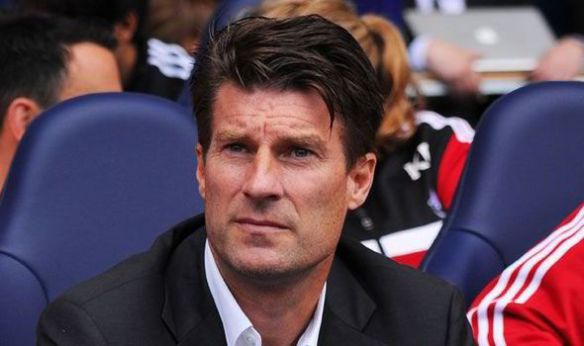 Barring an unbelievable end to the season, 4th looks to be a bridge too far as does the impossibility of United winning the Champions League. Dumped out of the domestic competitions by bottom half sides, United’s season is effectively over in mid-February. In terms of Moyes’ future I’d like to see Woodward and the Glazers properly back their man. Moyes is a much better operator in the transfer market than is currently being portrayed – Fellaini could still come good (think of all the United players that had slow starts to life at Old Trafford) and in Mata he signed one of the most gifted players in the league. His record at Everton was impressive – Cahill, Arteta, Baines, Jagielka, Coleman to name a few. Just don’t mention Darron Gibson, in any context.

Having demonstrated my ‘unwavering’ support for Moyes it may seem odd that I am writing in support of a replacement for him. The idea came during United’s latest poor performance at home against Fulham, as you all know we pumped 8000 crosses per minute into the Fulham box, with the measly reward of only two goals. Neither of which came from a cross.

Here, hypothetically at least, is why Laudrup would be a good replacement:

First and most importantly, Michael Laudrup’s team have always tended to be extremely tactical, especially at home. Much has been made of Swansea’s possession football and effective use of passing in triangles. Although it didn’t always pay off for Laudrup at Swansea, it would be fascinating to see what the results of a similar philosophy would be if implemented at United.

Second, having won four trophies in four years at Brondby and the League Cup last year, Laudrup has won more silverware than Moyes. Whilst it is harsh to criticize Moyes’ trophyless record at Everton, as winning trophies at Goodison was never his brief, considering the achievements of clubs such as Wigan, Portsmouth and Laudrup’s Swansea, it certainly wasn’t an impossibility.

Furthermore, the combination of Laudrup’s knowledge of European football, particularly La Liga, and an eye for a bargain have served him well in the transfer market. At €2.5 million Michu is clearly the stand out signing, and there is a very good case to suggest Laudrup would still be in a job had Michu not been injured. Other Laudrup signings that have done well include Chico, Pablo Hernández, Jonathan de Guzmán and Ki Sung-Yueng for a combined total of £13.5 million. In Moyes terms that’s half of what Marouane Fellaini cost.

In addition to this, Laudrup’s ability to develop players is also exceptional. A prime examples is Wayne Routledge, who found it difficult to maintain a place at several different clubs but has settled at the Liberty. The same could be said of Nathan Dyer, an explosive winger and perhaps one of the most underrated players in the division.

The hypothetical solution is this. Give Moyes another few games – United’s next fixtures are Crystal Palace, Olympiakos and West Brom all away, all tough, but games you’d expect the United of old to overcome.  If not, appoint Laudrup for the remainder of the season as Interim manager just in time for the crunch games against Liverpool and City at home. It’s painful to admit that these games, huge as they are within their own right, are little more than a chance to restore pride. If there is any improvement, hand him the keys to the Old Trafford and the code to the Glazer fortune. (If there’s any left, and it hasn’t been spent on debt interest.)

Although this change will never come to fruition, it’s a fantasy I look forward to entertaining next time United are struggling to overcome more relegation fodder. As for Michael Laudrup, his reputation and skill as a manager far outweigh the club he has been sacked from. Adored by the football intelligentsia, one day he will could well manage one of the many great teams he once played for.

6 thoughts on “Is Michael Laudrup a potential replacement for David Moyes?”