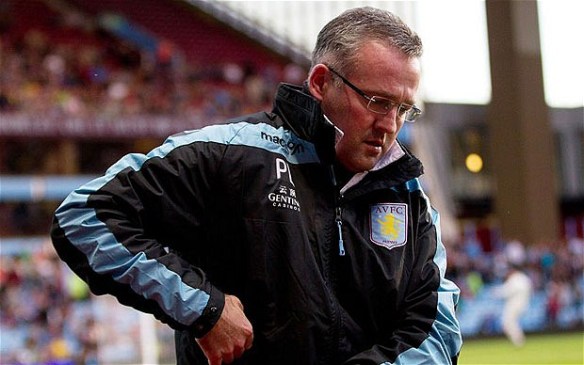 Back on Boxing Day Crystal Palace beat Villa 1-0. This made four losses on the trot and six defeats in nine at home. There was, almost unbelivably, a movement towards ‘Lambert Out’ on social media, phone ins and in some media.

Claims that players like Weimann, Baker and Bennett’s development had stalled, his obvious reluctance to play a full strength team in the FA Cup and accusations of failing to find a midfield puppetmaster to replace Petrov were beginning to bubble over for Lambert.

It’s worth remembering that it wasn’t long ago that the Premier League trap door beckoned for Aston Villa. The 2011-12 season saw the much maligned Alex Mcleish grind the team into a lethargy that would mean they woud finish the season on 38 points, only beating the drop by two; a steep 10 point and seven position fall from their finish the year before.

McLeish was sacked after 11 months in charge and Paul Lambert took over in the Summer of 2012 with the unenviable job of slashing a bloated wage bill, clearing out a forest of dead-wood players and blooding a host of youngsters in order to stay afloat in an ever more competitive and cash rich league.

Gone were the days of a Villa midfield consisting of Barry, Petrov, Young and Milner. Only one remained, cruely hamstrung by acute leukemia. The heady days of top six finishes and European ventures seemed a long forgotten memory. Instead players like Stephen Ireland, Shay Given, Darren Bent, Alan Hutton and Charles Nzogbia, at one time of obvious potential and class, now cast a shadowy gloom and a brooding miasma over the club.

Seemingly unwilling to give their full supply of effort, some past their peak, and all completely unsuited to a high pressing, tactically flexible style their new manager wished to take,  their main function instead was to drain the life blood from the club coffers. Ireland, Given and Bent alone were taking a princely £160k a week from the wage bill whilst decidedly underperforming.

Lambert over time began to reshape the club in a young and hungry image, bringing the likes of Andreas Weimann, Nathan Baker and Ciaran Clark through the academy to become established first team players, rekindling the careers of Fabian Delph and Gabby Agbonlahor and bringing in Yacouba Sylla and Christian Benteke. In doing so he allowed himself to get rid of many of the bloated superstars of yesteryear clogging his coin purse. Bent to Fulham, Ireland to Stoke and Given to Middlesborough (albeit on loan).

The problem is that we seem to want it all – not to be in a relegation battle, to sign players, to play beautiful football and to have a sustainable club.  The reality is that the financial trimming means that we simply can’t do this and have to prioritise. (source)

There were obvious teething problems in this reshaping. Few teams have ever looked as shaky and inexperienced in posession as this transitional Villa side and their defence at times looked to be of porcelain fragility, particularly without Lambert’s third recruit Ron Vlaar. Since Vlaar joined Villa he has competed in 42 games for the club, which have given them a goal difference of -7. But when Vlaar has not played (in 15 games) their goal difference is around -23. (Thanks to Dave Beeston for these stats)

Villa Chief executive Paul Falkner called Lambert’s march “definite, clear progress”. The emergence of Benteke as one of the league’s most coveted strikers and Villa’s steady inching away from being perilous relegation flirters seems to be the kind of long term vision taking effect that is usually reserved for conversations between worried Moyes aficionados in Manchester United pubs.

The loan signings of Ryan Bertrand and Grant Holt signify a clear realisation of financial limitations but an experience and initiative to not allow this to delay the club’s development. They are proven Premier League performers acquired for an imminent need.

Benteke is beginning to return to some form and it is the fault of the rest of the team that they have suffered without him. No one else has scored in five of the seven games that Benteke’s barren spell encompassed and this is something that Lambert will need to address (though he has been unlucky with the sickening injury to Libor Kozak)

Lambert’s selections and tactical nous have allowed him to take points at both Anfield and the Emirates this season and he remains an intelligent and tactically flexible manager. His deployment of high pressing, running the channels and the exploitation of space left by an aging Gerrard were exemplary against Liverpool and he was unlucky again to have an injury to Agbonlahor significantly alter the team’s shape resulting in a 2-2 draw from 2-0 up.

This highlights a problem in Villa’s squad. It is paper thin. The radical reshaping from a bloated squad of overpaid underperforming ex-beauty queens into a young hungry team in the manager’s image was never going to be easy and it’s one that many Villa fans are appreciative will take a long time. One and a half seasons into the job however and you would be hard pressed to find a man better placed to bring Villa back to the top half of the Premier League.

P.s Villa fans who are still unhappy with their current team can always comfort themselves with the fact that they no longer have to watch this man every week.