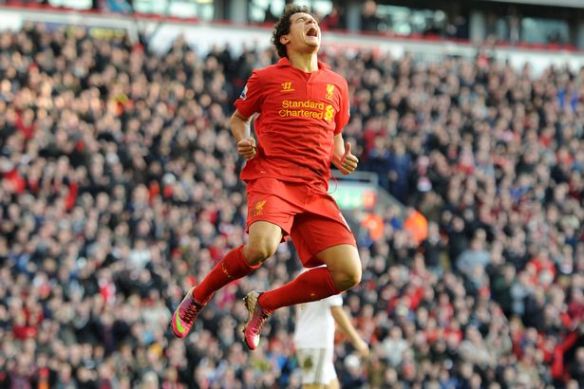 Personally, I love rough players. Give me Carragher the granite over Agger the artisan, give me Sissoko over little, dainty Joe Allen, the hulking Toshack over powder puff Owen but this is different. Little Phil could be taken away by the lightest breeze but I don’t care this time. He’s a pixie, a sprite and an irritant to all but his team mates.

The closest player in terms of style and gait from our past would be Peter Beardsley but he was never Brazilian. Not even close. Even if he’d changed him name to Pedro Beardinho he wouldn’t be able to cut it. No. Little Phil is the real thing. Brazilian. 10. Curls.

He’s Pablo Aimar’s baby brother. Nimble of foot and hip and with a slightly startled expression he’s already made plenty of friends at Liverpool. Indeed, he’s so popular that many consider him next in line to sod off to the nearest Champions League side or a budget needs balancing. That’s how quality’s judged these days.

The man loves a through ball. On three occasions last season he demolished sides away from home. Newcastle 0-6, Wigan 0-4 and Fulham 1-3 were all undone with a collection of slide rule passes and inch perfect crosses. He isn’t shy of a shot either but it’s the space between the defenders and deep lying midfielders where he does his best work, with a blur of legs and close control that resembles a miser with his wallet.

If Liverpool use him carefully he can be anything he wants to be. Time is on his side for Phillipe Coutinho is just twelve years old, or rather seems to be. He plays with a teenage love of the game. I’ve no doubt that he goes home from training and still kicks the ball at his back wall for hours on end exactly the same way a kid does, just for the sheer enjoyment of it. He probably does it in a full kit too. And shinnies.

He fits in with Brendan Rodgers’ idea of how the game should be played – with quick passes, swift movement and pressing whenever they don’t have the ball. Daniel Sturridge should cherish him. He’s likely to be his best friend on the pitch over the coming years. There should be an interesting triumvirate of Henderson the workhorse, Sturridge the finisher and Coutinho the magician. That last is the always the hardest to cast.

And then you throw in Luis Suarez.

The fans love Phil and have rewarded him with an awful, awful song. I often wonder what Coutinho makes of it all – staring through the clouds of red smoke and trying to work out what the hell they’re all singing about. At least there’s no song involving ‘Sussudio’. We must be thankful for small mercies.

So, Philippe, please don’t get injured, please don’t look at other clubs and please realise what your involvement means to us all. Those three factors blend so well with that badge.

3 thoughts on “Philippe Coutinho – Liverpool’s no. 10 from Brazil”