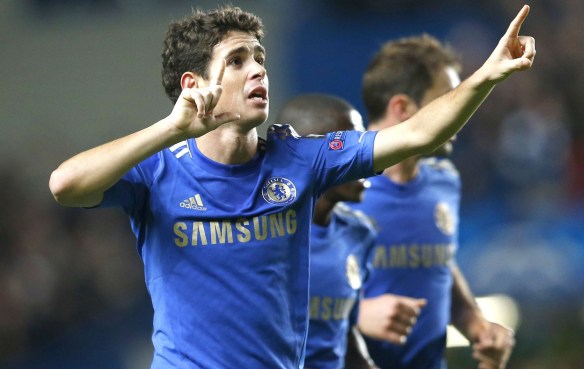 Oscar’s trademark, on the other hand, is having the temerity to try the barely-plausible, to test the very limits of his skill at the drop of a hat. It seems as though the idea that what he’s about to attempt might not work never crosses his mind. Oscar’s moments of magic, in fact, are reminiscent of a certain Stamford Bridge legend.

More than a decade ago, after one of the remarkable goals in Chelsea history, Claudio Raneiri said of Gianfranco Zola “[he] tries everything because he is a wizard and the wizard must try.” It would be foolish to suggest that Oscar will follow in Zola’s footsteps – he has a long way to go to even get near him – but it’s undeniable that the Brazilian too has a knack for wizardry.

Nobody else in the squad would even try what Oscar did in November 2012 against Shakhtar Donetsk. His control and finish were remarkable not just for their quality but for the instinctive way Oscar went for goal despite being virtually in his own half when Andriy Pyatov’s headed clearance reached him. Nor would many dream, when presented with the ball in their own defensive third, of sucking three players into challenging for it only to chip it over the lot of them to release Ramires on the counterattack, as Oscar did at St. James’ Park.

And then there was that goal against Juventus. Few make fools of Gianluigi Buffon, fewer still of Andrea Pirlo, but Oscar managed both in one magnificent moment, spinning around the latter with one touch before blistering the ball into the top corner for his second goal of the match. That game was Oscar’s full debut.

It’s not just his wizarding habits that set Oscar apart, however. That home game against Juventus was notable not just for his goals but for the defensive effort he put in. Roberto di Matteo asked him to nullify Pirlo at the base of the visiting midfield; Pirlo was duly nullified. The visitors had to wait until Oscar was forced off the pitch with an injury in order to come into that game.

The Brazilian repeated that same trick against Mikel Arteta during the Blues’ 2-1 win at the Emirates shortly thereafter, finding himself permanently installed as Chelsea’s number ten, his ability to harry opposing midfielders ensuring he remained central while Mata and Hazard contented themselves with spots on the wings.

Unfortunately for Oscar, his time as a starter was cut short by the arrival of Rafa Benitez, who – not without good reason – decided that the edifice di Matteo had constructed didn’t have the defensive stability required in the long term. Unwilling to sacrifice Mata or Hazard, Benitez shifted Oscar to the bench as he attempted to shore up the side.

The youngster still got plenty of playing time, and eventually fought his way back into the lineup, but never again was he trusted with the number ten slot, which Mata had made his own. Instead, he was forced out to the flanks. It’s note a position that suits him; although he’s quietly effective as a wide forward, he’s further away from the action and therefore less influential. He could drift centrally, which is what Mata does when placed wide, but his commitment to protecting his fullback (one which Mata does not share) prevents him from wandering too far.

One of the big questions facing Jose Mourinho as he comes into the new season is how to get the most out of both Oscar and Mata. Oscar’s magic is largely untapped on the wing; Mata’s clearly at his best as a number ten. One potential solution is to convert Oscar into a box-to-box midfielder, which would take advantage of his defensive capabilities while also allowing him to chip in on the attack. 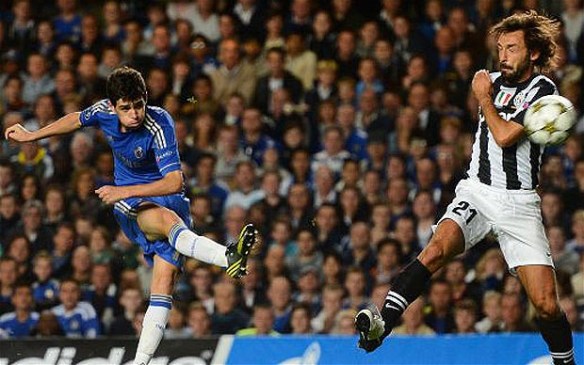 Both di Matteo and Benitez did some experimentation with Oscar in the double pivot, generally as a last-ditch effort to score goals in important games. But there are two flaws with this plan. While Oscar’s a magnificent defender for an attacking player, when you start comparing him to the John Obi Mikels and Michael Essiens of the world he doesn’t come off nearly as well, and, more importantly, holding him deep means that although he’ll get some touches in dangerous areas, they won’t come nearly as frequently.

A better solution, so far as Oscar is concerned, would be to invert the triangle and play him as the furthest forward central midfielder in a 4-3-3. From there his defensive work would be a complement to that of his partners without becoming a burden preventing him from influencing play while Chelsea are on the ball. But even that’s not ideal, because it would push Mata wide, where he’s less comfortable.

But even if the positioning problem looks intractable, there are plenty of reasons to hope for a major step forward from Oscar this year. The presence of Kevin de Bruyne will allow Mourinho to rotate his creative players more often without losing much in the way of quality, and although normally we wouldn’t want a young, promising player to get fewer matches, it’ll be a major positive in Oscar’s case.

It’s unusual that a 20-year-old player could be accused of getting too much football, but that’s exactly what happened with Oscar. Between Internacional, Chelsea and his duties with Brazil, Oscar featured in a phenomenal number of matches last season and was clearly wearing down as early as February. Fewer games means that we’ll get to see more of Oscar at his peak.

Add the inevitable adjustments to English football, age-related development and the ability to work with a world-class coach, and it’s easy to imagine an even brighter future for Oscar. If Chelsea can exploit his unique ability to play with that blend of madcap genius and responsibility, it’s by no means out of the question that he can develop into one of the greats.

And even if he doesn’t reach the dizzying heights that his talent suggests is possible, watching Oscar work will always be a joy.

This piece was written before the start of this season as a contribution towards the Samba Series rather than a comment on Oscar’s recent form at Chelsea.

One thought on “Oscar – Brazil’s Prince of Stamford Bridge”