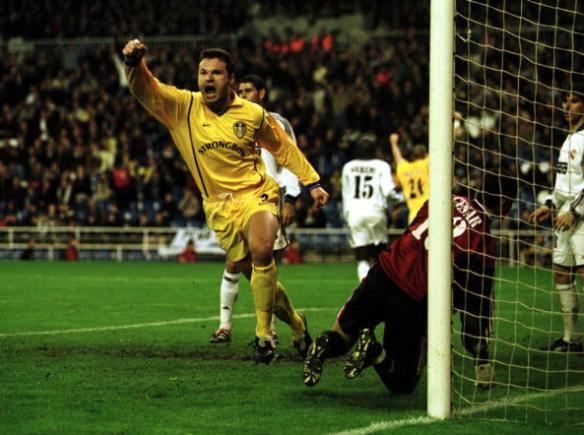 Classic examples include Monaco’s 8-3 win over Deportivo La Coruña in 2003 and Lyon getting the win by five clear goals to qualify from their group in 2011, but nothing matches the 2000-01 competition for moments that make you look back and think “what, really”?

Here in England, that year’s competition is probably best remembered for Leeds United’s run to the semi-finals. And if you look beyond what would retrospectively prove to be a strong first team – the likes of Viduka, Kewell, Bowyer, Dacourt and Bakke all playing some of the best games of their careers – the paucity of the club’s squad was horrifying.

This is best summarised in the 4-0 group stage defeat to Barcelona. While the Catalans were able to call upon substitutes Ivan De La Peña, Emmanuel Petit and Alfonso, Leeds’ replacements that day were Danny Hay (four Premier League appearances in his career) and Tony Hackworth (three Leeds appearances, none in the league, currently playing for Pickering Town at the age of 33).

If you’re thinking “that’s probably just the tip of the iceberg” then you’re wrong. The other substitutes that day were a 21-year-old Paul Robinson (the long-punting goalkeeper, not the Andy Wilkinson-prototype left-back), along with token senior player Darren Huckerby, aspiring retiree Matt Jones, Australian youngster Jacob Burns and Gareth Evans, a teenager whose first name I just had to look up on Wikipedia.

Predictably, Barcelona won 4-0 at a canter, but Leeds bounced back to finish second in the group above the La Liga side, thanks in part to a 1-0 win over AC Milan with the exact same options available on the bench. They progressed to the short-lived second group phase, where their results included a 4-1 win (with a squad so thin only five subs were named) away at an Anderlecht side whose own progress to that stage of the competition was equally mystifying. 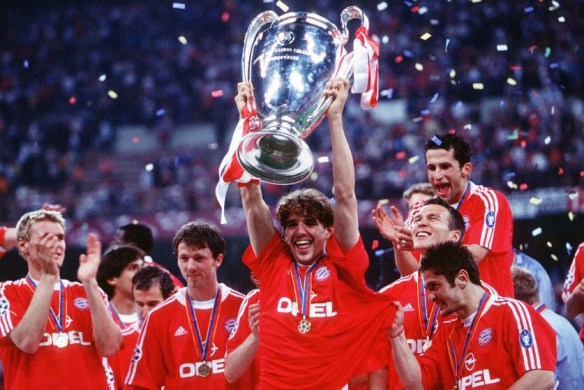 In the 1999-2000 Champions League, Molde had the worst defensive record in the group stages with 14 goals conceded. In 2000-01 Anderlecht conceded the same number (only Shakhtar and Rosenborg, with 15 each, conceded more). However while Molde finished bottom of their group with three points from six games, the Belgian side quadrupled that tally to actually win a group containing Manchester United, PSV Eindhoven and Dinamo Kyiv.

As one could expect, that was far from being a weak Anderlecht side. The defence was packed with international experience (even if Lorenzo Staelens and goalkeeper Filip de Wilde were perhaps past their prime) and midfielder Bart Goor had been part of the Belgium squad at Euro 2000, yet what could only be described as porous away form – shipping four goals in the Ukrainian capital as well as five at Old Trafford – meant their progress came with a goal difference of -3, the worst in the group.

While the Belgians would ship a further 12 goals in the second group phase, a period which incorporated three more away defeats, Sir Alex Ferguson’s side made it through to the semi finals with another second-place finish after seeing off the third of the competition’s Jekyll and Hyde teams, Sturm Graz.

The Austrian side, inspired by the original McCarthy and MacArthur – Markus Schupp and Markus Schopp – could not be accused of not knowing their strengths. Relatively smooth sailing in the qualifying rounds, helped by victories in the home legs of ties against Hapoel Tel-Aviv and Feyenoord, was followed by a 100% home record in a somewhat less daunting group than those conquered by Leeds and Anderlecht. Galatasaray, Monaco and Rangers were all swept aside without the concession of a single goal, which made their results on the road even more inexplicable.

To lose 5-0 once in the group stage is careless, but to do so twice is unforgivable, or at least it ought to be. “Unforgivable” is certainly a word to describe conceding a Champions League goal to Billy Dodds in the opening outing, the first of those five-goal reverses, and that arguably made Marco Simone’s hat-trick in the following away trip slightly less humbling in comparison.

Somehow, however the other three teams took enough points off each other that even a 6-0 defeat in Turkey would have seen Ivica Osim’s side through. In the end, that game finished 2-2, though, and an identical result between Rangers and Monaco at Ibrox meant Sturm won the group, like Anderlecht with a -3 goal difference.

Also like their Belgian rivals, the Austrians fell at the next hurdle with six points, with home and away victories over Panathinaikos not enough to see them through. But don’t worry, they still had time for another 5-0 defeat, however this time it was at home against Valencia. It was almost as if they were saying “look, we can do it here too”.

For all the crazy scorelines, the goals in the 2000-01 competition were spread relatively evenly. Indeed were it not for Raúl’s brace in the quarter-finals, Simone would have topped the charts (level with a handful of others including Leeds midfielder Lee Bowyer) despite falling in the first group stage. All in all quite a strange year – it was a shame Valencia and Bayern Munich couldn’t produce a final to match. But short of each team winning one half by three clear goals it’s tough to see what they could have done, and that sort of thing only ever happens once.

One thought on “Champions League Memories: 2000-1”