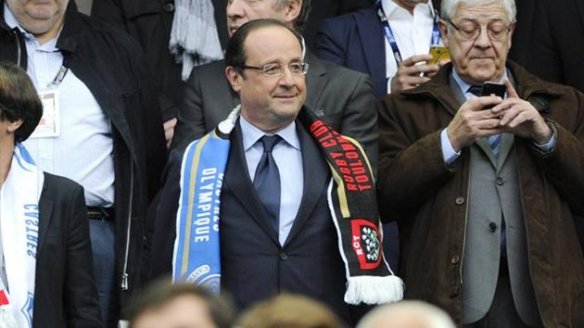 On his return to action on The False Nine, Huw Evans dips back into the political landscape of France and its effect on Ligue 1’s fortunes…

In October I wrote about the upturn in fortunes of French football, but now political change looks set to halt that progress.

There’s an air of disappointment in French politics currently with an overwhelming sense of dissatisfaction lingering across the channel.

It’s easy to see how the French have lost their patience with Francois Hollande. The President was voted in on the back of an Obama-esque ticket, promising change and revolution. He wasn’t lying per se; he just hasn’t performed enough miracles to justify the shifts in policy he has brought about.

Some now vilify Hollande. The crowd booed him on Remembrance Day as he was laying the wreath. Sacre bleu! A level of abuse previously unheard of!

Yet I’m sure that many of those involved in French football’s top two tiers may well have shared the heckling crowd’s feelings. 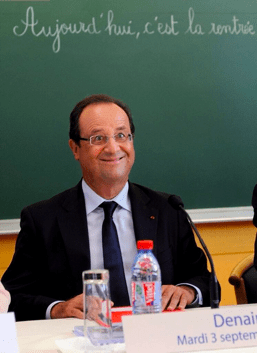 For his footballing critics, it all comes down to the new super-tax of 75% on salaries over €1million (£850,000) per year, which will be levied over a two-year period.

Hollande’s new tax was passed by the Sénat last month and will soon impact upon a French top-flight featuring some of the best paid players in the world, at least when it comes to the stars of Paris Saint-Germain and AS Monaco.

Financially it makes sense. Boosting revenue collected by the government to around €60million will be a useful boon amid the ongoing turmoil of the global recession, but long term it could seriously harm the French football.

Many may be in favour of bleeding players raking in astronomical wages each week dry, but the counter-argument must be recognised along with the enormous financial resources available to the industry through the sport.

It is slightly worrying for fans of clubs in Ligue 1 & 2 since it appears that this tax will come to be detriment to the league.

Teams must compete financially, both with their league rivals and foreign clubs, and many quality players who command a high salary may well look elsewhere for employment due to the new tax. This could have a positive impact on other leagues, possibly bringing the stars of Ligue 1 to the Premier League however these changes would put the balance of European football totally out of kilter.

There was a last ditch attempt recently to get Hollande to exempt French football teams from the tax, and it was following this that the FFF (The French FA) and Ligue 1 & 2 clubs decided to go on strike.

While industrial actions of this kind are common in France, this would represent the first  walkout in French football since 1972. The strike was initially set for the last weekend of November however has since been called off, postponing it to a later date.

Hollande’s presidency could be defined by his implementing of the new taxes, risking alienating a the richest sections of the population, and those whose aspirations and political belief hinge on protecting the affluent.

Already, actor Gerard Depardieu have left France for Russia so as to avoid this new tax with Vladimir Putin warmly receiving the Gallic star with a brand new passport. Who’s next? Zlatan Ibrahimovic has both the income and outspoken ego to compare to the French cinema star, and it’s unlikely that he will want to hang around in what remains a second-level European league without a bumper pay packet.

It makes you think that surely future potential investors and players will be put off coming to France, though early indications would suggest the Qatari’s of PSG don’t give two hoots about the whole fiasco, with heavy spending planned for January 2014.

Maybe Zlatan will stay then, although it will be interesting to see how the tests of Financial Fair Play affect any compromises his paymasters come up with to circumvent the tax with greater wages or the loop-hole of tagged-on endorsements.

Possibly the most pertinent point regarding this tax is that one of French football’s most historically successful teams, AS Monaco, will be exempt.

ASM would be the only team able to continue the high spending without worry due to the principality’s unique tax-free status. This peculiar situation will be the first of its kind in a league that straddles two nations. The other clubs will no doubt cry unfair treatment to the FFF, who as of yet doesn’t have a solution to this predicament. This has lead to many debating whether or not Monaco should be allowed to continue to play in the French football system.

Equality is not the only issue here, but also the development of France’s future stars. Whilst there hasn’t been many Monegasque to turn out for Monaco, the club has a rich history of developing French talent. Thierry Henry, Patrice Evra, Lilian Thuram, Ludovic Giuly, Emmanuel Petit, David Trezeguet are all numbered amongst Monaco’s list of former players to represent France. This tradition has been once again highlighted in this season’s Monaco squad.

Now when you think of Monaco, the mind jumps to global stars such as Falcao, Moutinho, Rodriguez and Carvalho. However it is in fact the core of young French players who’ve made the most significant impact this season.  Players such as Layvin Kurzawa, Emmanuel Riviere and Geoffrey Kondogbia have been stand out performers for the Riviera outfit this year and arguably, AS Monaco has been the most important club in France promoting French talent this season.

France is certainly not short on talent, but with several high profile players leaving the league and finding success abroad recently, it is becoming increasingly important for French clubs to hold on to their homegrown and international stars in order for Ligue 1 to improve in quality and stature.

It looks as though the tax will have a significant impact on French football outside of its top two of super-rich, super clubs in Paris and Monaco.

The one comfort as a British fan of Ligue 1 is that I have the Premier League to fall back on. Soon enough, so might the stars of the France’s top divisions.

2 thoughts on “France’s Super-Tax: the conflict between taxation and elite football”