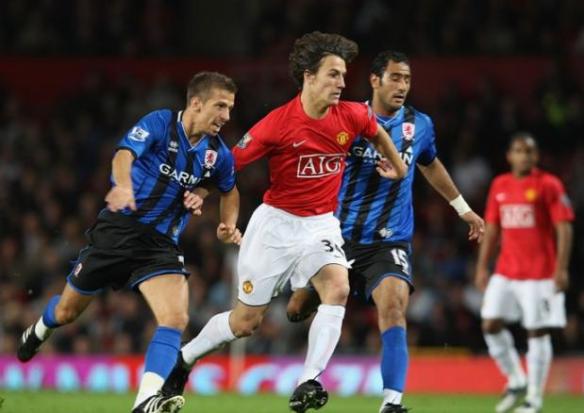 Hailed as the real deal upon his arrival from Internacional in January 2008, Possebon was considered a player of immense promise for Manchester United. Eligible to sign so early thanks to his Italian passport, Possebon was considered one of the finest passers of the ball at the club. During his time at the club, he caught the eye of many in the Reserve set up and even earned himself a call up for the Italian U20 side.

He seemed to have it all: composure, intelligence, awareness and a cracking shot. However, his time was cruelly cut short by a frankly disgusting tackle from hatchet man Emmanuel Pogatetz during his full debut in a Carling Cup match in September 2008. After it, Possebon struggled to regain his form and fitness but was rewarded for his efforts with a Carling Cup medal in March 2009.

Nonetheless, Possebon soon found himself sidelined at United and returned to Brazil after a short and unimpressive loan spell at Braga. Following a move to Santos, alongside Neymar, he sadly now plays for Juventude in Serie D and looks unlikely to fulfil his potential.  It really is a great shame that such a promising talent’s career was ruined at such an early stage.