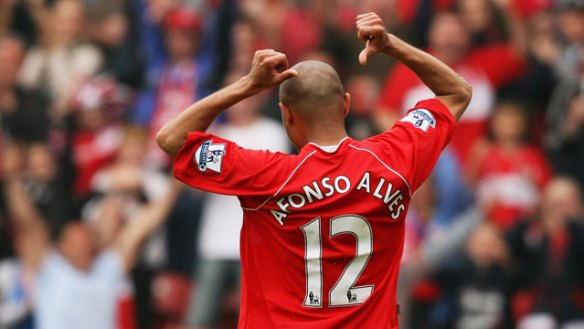 And so was Afonso Alves.

Succeeding Klaas-Jan Huntelaar and being Brazilian are not the easiest things to cope with in the Eredivisie. Huntelaar had scored 33 goals in 46 Eredivisie matches for SC Heerenveen before he made the switch to Ajax in the winter of 05/06. With Giorgios Samaras leaving the Heerenveen club the same winter (damn you winter transfer windows), SC Heerenveen turned from a dark horse for the title to a side that had to make-do with UEFA Cup football. When Alves became Heerenveen’s record signing, wonders were expected. Especially since Heerenveen fans had been spoiled in the years before. Apart from Huntelaar and Samaras, Van Nistelrooij, Tomasson and Marcus Allback had done amazingly well in the blue and white jersey of the Frisians. Throw in the burden of being a Brazilian striker in the Eredivisie and the comparisons with Romario and Ronaldo automatically pop up. Before a ball was kicked, Alves had a whole lot to live up to.

It is exactly what he did. His first league goal for the club came in his debut performance, against ADO Den Haag. With a 2-3 winner in injury time, Alves gave a first glimpse of his class. The tone was set and the music would keep on playing. Finishing the season with nine goals in his last four games, including this schooling of free kick maestro Pierre van Hooijdonk in his last game as a professional footballer, Alves became topscorer of the Eredivisie with an astonishing 34 goals in 31 matches, picking up the European Silver Boot, just one point behind AS Roma’s Francesco Totti. To crown an impressive season, Afonso Alves made his debut for the Brazilian national team. On 17 May 2007, he was allowed to come on as a sub against England.

It was there where Afonso Alves’ eyes were opened. Heerenveen wasn’t big enough for him anymore. He was mocked by his national team mates for playing for such a small club and as a result, Alves decided he wanted to leave.  Preferably to the Premier League, but any step higher would do. Heerenveen were reluctant to let the striker leave and if they would sell him, it was on their terms. A fee of more than €20m was demanded and Afonso Alves responded by going on strike. Furthermore, Alves had two(!) agents representing him and as the golden goose was ready to be slaughtered, the two started arguing about who was actually the main man to represent the striker. 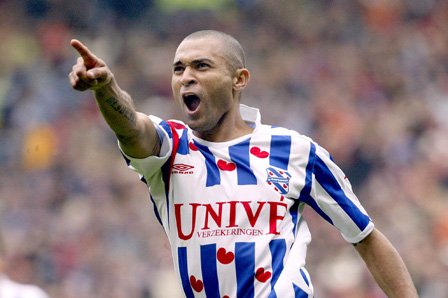 When the dust had settled and the transfer window was over, Alves was still at Heerenveen and decided he wanted to play for the club again. Despite manager Gert-Jan Verbeek claiming Alves had to prove himself again just like anybody else, it was only a matter of time before the Brazilian became a starter for Heerenveen again. Alves had turned from a model professional into a rotten apple. Alves often came late to training, if he bothered to show up at all, badmouthed the stature of the club and kept on pushing for a transfer. Luckily for Verbeek, he was as uncontrollable on the pitch as he was off it. On 2 October 2007, Alves completed a feat no one has ever managed before and is still to be emulated today. Firing an astonishing seven goals in against Heracles Almelo (9-0), he broke the record for Eredivisie goals scored in a single game.

Meanwhile, a transfer to AZ was agreed. Or at least, that’s what AZ claimed. Another soap surrounding Alves started and it would only be settled in the summer of 2008. But Alves was long gone by then. After another transfer window of rumours, Alves finally got his big break.

For a humongous fee, the striker was sold to Middlesbrough. The start was fairly promising, with 6 goals from 11 games – including a brace against Manchester United – but the second season was a true horror. Instead of playing himself into contention for the Brazilian national team, the striker ended the season with 4 league goals from 31 appearances. Consequently, Middlesbrough were relegated that season and are yet to come back up.

Alves went to Qatar and after four years in the Qatari league, he is currently without a club. Meanwhile, the Eredivisie is yet to recover from the damage the striker has done to the reputation of goalscorers in its competition, as he solely (ok, a bit of help from Mateja Kezman) pulled down the market value of an Eredivisie goalscorer – Wilfried Bony notwithstanding.

In the end, it’s probably all three of those things. Alves was a fairly decent striker with a world class right foot and a reasonable amount of pace and power. Something he could come along with in the Eredivisie, as long as he kept his head down and was given the opportunity to roam around the 18 yard box.

Furthermore, the goalscoring record is a bit over exaggerated, as the striker scored 29 of his 45 Eredivisie goals in nine matches, leaving the rest of his record at a more fitting 16 from 30. At Middlesbrough, he showed occasional pieces of class, such as this beauty against Stoke, but in the end, the image of Afonso Alves will be associated with a nightmare. For Middlesbrough fans and Eredivisie clubs. 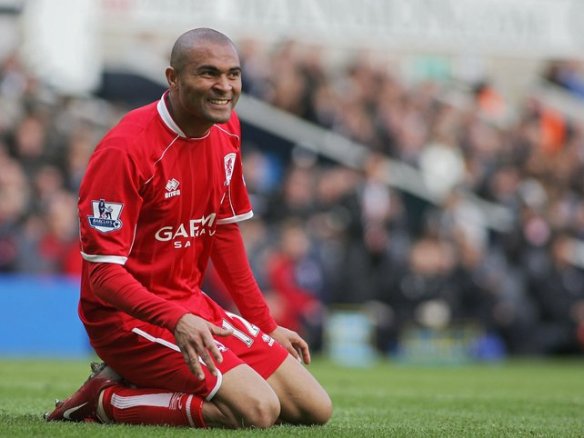 Oh god, Alfonso, son….what the hell were you all about? His name is a by-word for A Crap Brazilian. He came to us from the Erevidisie where he’d scored 45 in 39 for Heerenveen. What could possibly go wrong? 20 million Euros later he’d scored 10 in 42 across two seasons for Boro and had contributed the square root of sod all to the club. He was rubbish. Utter rubbish.

Maybe someone kidnapped the real footballer and replaced him with redundant article that arrived on Teesside. One thing is for certain, a block of lard in a wheelbarrow would have been a more mobile, potent striker. Touch, vision, power; these were just three skills that Alfonso didn’t possess. Somehow we persuaded Saudi club Al-Sadd to give us seven million quid for him and he’s plied his trade in the middle-east ever since.

The whole Alves situation is good proof that a couple of decent seasons does not a great footballer make and that the expression, ‘he’s scored loads in the Dutch league’ should always be treated with great caution.

One thought on “The Ballad of Afonso Alves”