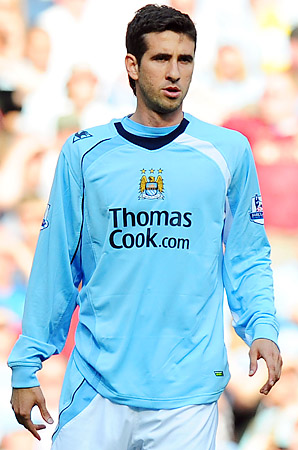 How do you appraise a man who only made one injury-time appearance against Bolton in 2009?

On paper, Gláuber Berti’s anomalous Manchester City career is as insignificant as his one tackle, handful of touches and misplaced pass were on the last day of that season.

But now playing for Columbus Crew, with scattered appearances in Romania, Germany and Brazil (as well as one solitary cap for A Seleção), it is his unremarkable stay at Manchester City which potentially holds the most resonance, earning him cult hero status among fans.

A free transfer the day before City became the richest club in the world, the illustrious Berti was a misunderstood and forlorn character, never quite fitting into a system which was so precipitously shaken up on transfer deadline day.

And there is usually a certain furore concerning the role of football’s samba virtuosos gracing the rain-sodden pitches of the Premier League. Images of Brazilians scurrying in between the towering presence of blood-drenched, Butcher-esque power houses. The stepovers. The dramatic dives. The fabled ‘cold, wet Wednesday night in Stoke’.

But these simply didn’t apply for “that Bertie fella”.

Instead Mark Hughes would be the one more likely to perform the typical Brazilian twists and turns by simply lettering his name on the teamsheet with a pen on paper (Gláuber Leandro Honorato Berti, by the way) nearly every week.

At least he was consistent. His regular appearances on the bench as a non-used substitute is what made Gláuber so conspicuous.

It is the equivalent of that second cousin who turns up to the party – the one you don’t quite know, but really should. He quietly gets on with life sat in the corner as everyone else begins to whisper and fabricate stories. But as the night (and so, proverbial season) drew to a close, it only made sense for Gláuber to make an appearance on the dance floor (errrr, pitch).

The last game of the campaign against Bolton was to be Gláuber’s saving grace as his one-year contract would not be renewed. Demonstrative of his season, his 21st appearance on the bench drew the customary cheer, but nothing will compare to the sound when Gláuber removed his training top and prepared himself to get on the pitch.

The ovation he received was louder than Felipe Caicedo’s early goal in the opening minutes of the game, perhaps even louder than all of Caicedo’s goals put together. City fans had waited and joked about the moment for so long and as Gláuber completed a solitary pass with only seconds to go, it was as if all their dreams had come true.

Four years on, as City fans tear into each other over potential summer transfers, Gláuber’s name still resonates – tinged with Chuck Norris-esque admiration.

“It was Gláuber who cost £32.5m, with Robinho arriving on a free the following day,” the fans will say. “Did you know Gláuber Berti can reproduce Michelangelo’s Sistine Chapel ceiling on Microsoft Paint with only the spraycan tool?” they will add.

In fact, it is difficult to imagine anything but a unanimous reaction were Gláuber Berti to make a glorious comeback to the club for no reason whatsoever.

Berti folklore is, purists would say, what holds them together as fans; one cult hero epitomising the self-deprecating drollness which defined City for so long. Gláuber was caught between the years of inconsistent mediocrity and the euphoria of Premier League stardom and it is that which raised him to such enigmatic and majestic status.