Much like literary theorists search for authorial intent, managerial intent remains something of a tactical minefield. Despite the British media making it clear that their prerogative rests faithfully with one of the pre-existing good news stories (i.e. goal scorer hero, faithful dog manager, underdog does it better/overdog is better etc.), the near-constant hiring and firing of managers is statement enough to send a huge foot through the sand in favour of clear managerial intent. When Chelsea perform poorly and André Villas-Boas gets the sack, it’s his fault – when Tottenham perform superbly and André Villas-Boas keeps his job, it is Andros Townsend’s glory. Clearly, the search for managerial intent only appears to be an issue at the winning end of the job, which is why for this piece, I’ve decided to use the example of Arsenal & Jacques Derrida’s theory of deconstruction.

Jonathan Culler states in On Deconstruction: Theory and Criticism after Structuralism that “If the observers and belligerents of recent critical debates could agree on anything, it would be that contemporary critical theory is confusing and confused.” I would say the same about football. As more and more money gets thrown on the Premier League’s very own special and massive bonfire, and as goal-line technology rears its ugly robotic head around the corner (with lots of torso and limbs still to turn), football has less of an identity than it ever has. Currently, football is at its least definable point in its long history (despite the archaic and monstrous rule books suggesting the opposite). Modern football is can be defined more easily as ‘tackling racism’, ‘lessons in crowd control’ and even ‘ballet’ (in the case of nimble and particularly twirly players) than it can be defined as its own entity. Eleven men, two goals, white lines and a ball seems a distant memory to me, yet it doesn’t feel so long since it was jumpers in the park. Like any desolate situation, football needs a hero – and just like Jacques Derrida heroically salvaged the text from the maddening clutches of the cunt author, so shall I endeavour to save football from the hopelessness of managerial intent. 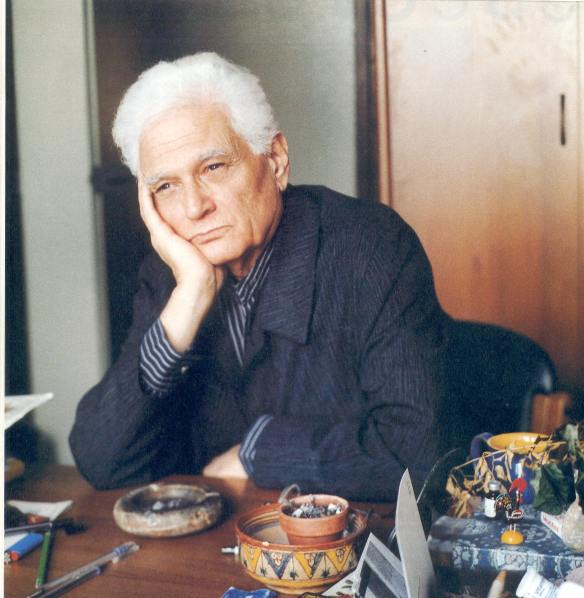 Returning momentarily to the quote from Culler, in the case of notable French theorist Jacques Derrida, this comment may fairly be read as something of an understatement. Derrida remains a controversial figure within the scope of literary criticism. His inception (or I should say ‘discovery’) of Deconstruction is arguably his magnum opus and certainly solicited the controversy shrouding his name. Deconstruction has been called “the deity of all literary criticism”, and for good reason. Before even beginning to discuss what it means, amusingly it is arguably easier to discuss what it doesn’t mean.

Deconstruction is not a structure, not a system, not a literary device, nor any other type of device; it cannot be contained, placed, removed, incepted, invented, created or destroyed. It pre-exists you or I, or its discovery (despite its complex nature and lack of physical being suggesting that it couldn’t), in a sweet turn of events, it immediately pre-dated Jacques Derrida at the precise moment that he invented (I should say exposed) it. Deconstruction works by destabilising and reversing certain philosophical, binary oppositions upon which the basis of intentional understanding resides – a bit like Arsenal.

Now I hear what you’re saying, “that was a lot of reading for a small joke, Joe”, and you’d be right – so as a sweet temptress I will offer up a quick-fire, bullet point list of similarities between Arsenal and Deconstruction:

As you’ve read, there was a little bit of fun in that last section. Some of those links are rather more tenuous than others, though it is only really the last point that concerns us today. The key to understanding managerial intent is to examine Arsene Wenger. A duplicitous character, Arsene often makes little sense (or French sense) when talking lightly. When Arsenal lose, he staunchly repeats the same lines he’s used for centuries of football management. When Arsenal win he either says something intelligent and footballey, or he congratulates the team on their performance and enjoys a wry little smile. The Frenchman has it all worked out. He’s realised that he has to keep a low profile.

We theorized earlier in this article that the issues of managerial intent only apply to winning teams; it’s the losing teams and their managers that need to worry about sharp, inevitable, human reaction. Arsene also knows that sometimes even teams who are doing well experience bumps in the road due to their over-elaborate managers. An excellent and recent example of this kind of attitude comes in Jose Mourinho’s handling of Juan Mata at the open of this current season. In a very public statement of control, Mourinho over-egged (thank you) his ambitious and unnecessary toppling of someone who for all intents and purposes is an eager, young and polite professional. Mourinho’s actions created a big press bubble, and will be sure to resurface in later life should anything particularly uncomfortable occur between him and the club, or even another player.

Arsene Wenger knows that in allowing his team to excel and grow within the confines of his particular system, his managerial intent becomes rudderless and unnecessary. Arsene Wenger the biro merely guides Jack Wilshere the word into a neat order with the other words on the team.  Arsene then steps back (unlike other managers) and lets the natural progression of deconstruction do its job within his structure. By virtue of his openness to this pledge, he is rewarded with free-flowing, bi-lingual football, and reduced press pressure. Apart from for personal glory, what reason is there for clinging onto the intention of your remarks? These words and sentences reduce and decompose into soft avocado like verbs for the stupid footballers to swallow anyway; it’s not like they actually heard what he said.

One thought on “Arsene Wenger and Jacques Derrida: The Search for Managerial Intent”