Spurs signed Gilberto in the January transfer window of 2008, on the back of four relatively successful years at Hertha Berlin. They paid over £2 million for his services, which is not a lot of money in modern football, but a truly incredible amount considering what followed.

When he made his debut against PSV, he became the first Brazilian to play for Tottenham at a senior level, and what a debut it was. It is still not clear exactly what Gilberto was planning as he pootled around on the ball until Jefferson Farfan stole possession and scored, but it is fair to say the moment cast a shadow over his whole time in England.

Having allowed PSV to score the only goal of the game, Gilberto was taken off at half time, a humiliating switch that was replicated in three of his seven starts for Tottenham Hotspur. 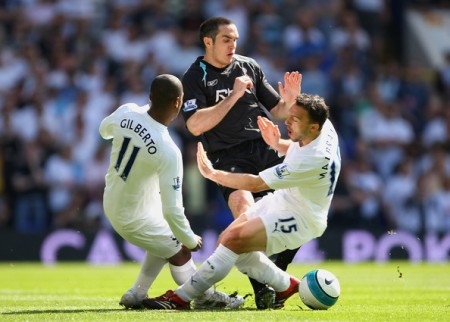 But enough of this negativity, Gilberto’s finest hour in England came against West Ham, when he came off the bench to score the third goal in a 4-0 win. As everyone knows, the third goal in any 4-0 thumping is often the key one, so Gilberto can at least be said to have won Tottenham three points more or less singlehandedly.

Gilberto’s contract at Spurs was eventually terminated by mutual consent, and the left back returned to Brazil, where he played for several different clubs before retiring at the start of this year.

All in all Gilberto played ten times for Spurs, scored one goal, and generally disgraced himself. However he was not always only known as a figure of fun, and it is worth remembering he played 35 times for Brazil, including twice at the World Cup in 2010.

Clearly we never saw the best of Gilberto in this country, and his name is unlikely to figure near the top of any list of great Premiership imports, but….but…..there is no but. What a terrible footballer.