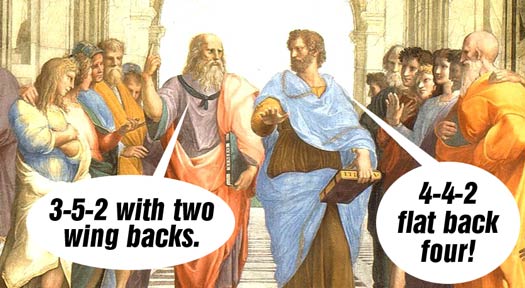 Combining philosophy and football is nothing new. From Camus to Joey Barton, the philosopher-footballer has always attracted a certain mystique.

But what about that subset of the philosophical game, the political philosophers? Less abstract than their marginally useless counterparts, less practical than a genuine politician. What would a team of political thinkers look like, based on their works and writings?

GK – Dante – having a man who argued for temporal unity as number one seems apt. Thorough and convincing, he’d surely have universal command of his area.

Fullbacks – Leonardo Bruni  and John Colett – two renaissance humanists at full-backs, for their ability to defend or attack anything depending on the audience and situation. Bruni with the Italian solidity, Colett the British bulldog spirit. And, given the humanist penchant for education, both future coaches.

CB – John Locke – should really be in midfield but I couldn’t get him in the side anywhere else. A solid foundation from which a lot of future play can be built on, but perhaps some of his invention is wasted back here.

CB – Adam Ferguson – every team needs a conservative-minded Scot at centre back.

DM – Cicero – would never abandon his duties, has no time for individual flair players (that’s you Caesar) over the team ethic. A bit older than most of his team-mates, but it’s ok, he was pretty much re-invented in the 14th Century, and he’s still got plenty to offer the modern game.

DM – Thomas Hobbes – while Cicero mops up, Hobbes is your angry, violent, ball-winner. Might get a few too many cards, but hey, that’s the natural state. Also recognises the need to do what your manager says.

LW – Jean-Jacques Rousseau – has been successful everywhere, but particularly interesting if you place him on the left. However, if and when things go wrong, you know he’ll get the blame even if he was dead before the event. 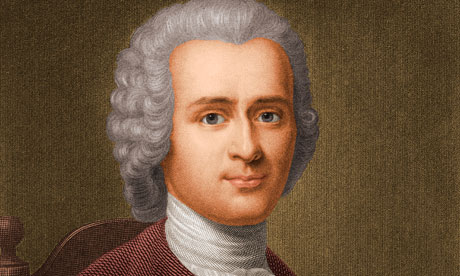 RW – Adam Smith – for the flair Rousseau gives you, Smith balances it up with solid play. Not fast, nor exciting, but give him time and he will change the whole game. Like Maradona everyone remembers the bit about the hand, but he really deserves to be respected for everything else.

AMC – Thomas More – in his ideal world (let’s call it Utopia) he’d get to play in the hole. Not everyone’s obvious pick for this position, but he likes the free role within a structure, and can turn games on their head in a moment. Also a bit more in touch with reality than many of his team-mates but does have a tendency to lose his head. (Sorry).

ST – John Rawls – there aren’t that many stand-out options up front, but Rawls gets the nod. Started off to tremendous acclaim, his second effort was attacked by many as completely undermining his legacy, but he claims nothing has changed. The Fernando Torres of the political world.

Karl Marx - too much of a wildcard to trust him with 90 minutes, but bring him off the bench in 1848 for an instant impact. Of course he’s always best when used on the extreme left wing. Also the team’s social(ist) secretary. Immanuel Kant – people are pretty sure this lad’s got talent. The problem is no-one has any idea what he’s saying. But it’s categorically imperative that he gets on the pitch at some point.

Bernard Mandeville – too much of a luxury player to use, bring him on if you’re in the lead.

Baruch Spinoza – in a team of stars, he’ll tolerate being on the bench, so he gets left out.

David Hume – despite in reality being much more exciting as a player, is often overlooked because of coming from the same place as Smith at the same time. The Ganso to your Neymar if you will.

William Penn – fringe player until he left to set up the MLS. Can be unreliable due to spending much of his time in prison.

Max Weber – incredible (Protestant) Work Ethic, bring him on if you need to trap your opponent in an iron cage of bureaucracy. Another who can be severely under-rated.

Ian Holloway “We are an offshoot of apes, allegedly, but who knows? We don’t really, do we? How long have we been on this planet? How long are we going to be here? What is it all about? We reproduce. Our offspring carry on. But that will only happen for a limited time. Before the whole thing blows up and we are sucked into a black hole.”