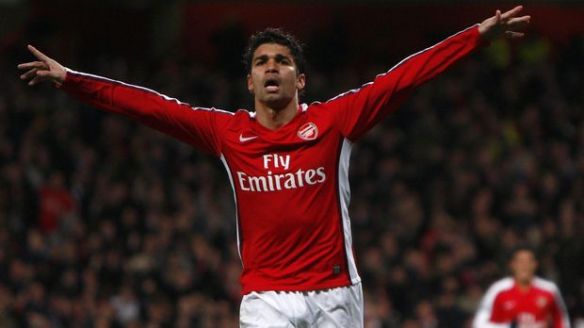 Players like Eduardo have grown steadily less and less popular since around the time of his return from the injury. He was and is a sensational finisher of any fathomable type of goal within 20 yards of the net; he isn’t particularly tall but is excellent in the air, while wonderfully calm and assured in front of goal, usually on his favoured left foot. He could never really hold the ball up and his lacking back to goal work was his true downfall at Arsenal, but his height belies his strength and enables his agility.

He is more than a classic poacher, but not much more. His assists record has always been fairly good, but his business lay in goals. It was fantastic for a time, but following February 23rd 2008, it has hit a low. He became football’s answer to Nas: the brilliance of the first album was concealed behind too much inconsistency and mediocrity for him to remain at the top. Embers of the mastery flickered on, but always tainted by dreams of what should have been.

The worst part of the timing of the leg break was that it came just as he was hitting league form. He had waited until December to get his first goals in the league, but he had been fairly prolific in the cups, sealing 3-0 wins against Sparta Prague (his first goal) and Sevilla, then adding League Cup doubles against Sheffield United and Blackburn, as well as an FA Cup strike away at Burnley. He was mainly confined to playing in the cups until late November, when Robin van Persie’s inevitable pre-2010-minimum-four-month-with-added-recovery-time-to-follow injury happened, giving him more league playing time.

A double against Everton and goals against West Ham and Manchester City, all beautifully composed left-footed finishes, left him with an encouraging 12 goals as March approached. 5 points clear on top of the league, only having lost one and drawn five all season, the trip to St. Andrews had seemed routine.

There’s little to be said about the incident that hasn’t already been said over the 5 years. Personally, I liked Arsène Wenger’s initial view on it all, which he later retracted. But of course, Taylor isn’t the kind of player to go flying into good, old-fashioned ‘reducers’ three minutes into games on the halfway line on a player who was causing no great threat. No, Sir, not he.

He had hoped to return before Christmas 2008 but had to settle for February. The rescheduled FA Cup 3rd round replay vs Cardiff would see him get a surprise start. 20 minutes in, he got the goal – a well-placed header from a Carlos Vela cross. It ended up being another cup brace, as he added a second from a penalty, before going off with a hamstring injury. This would become an odd precedent for the rest of his Arsenal career: providing a reminder of his brilliant finishing ability before spending three weeks out. He wouldn’t make his league return until the opening day of the 09/10 season, in the 6-1 trouncing of Everton. He added the sixth, a tap-in, thanks to some clever movement. 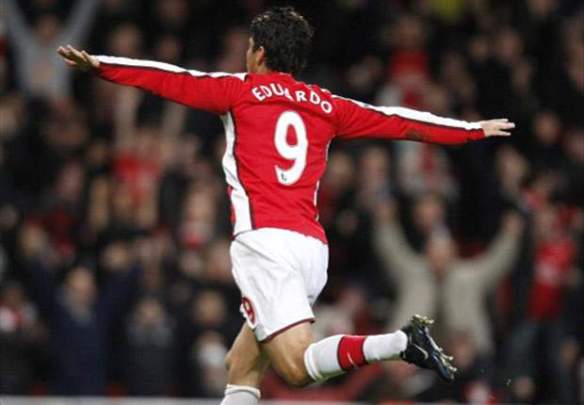 Between them he scored his best goal of his Arsenal career, against Burnley in the FA Cup. It was his second game since returning and before the match, Arsène Wenger had awarded him with the captaincy as “a tribute to his personality”. He returned the favour with a both unique and barely-explicable goal. The first in Alex Song’s Pantheon of Chipped Through Balls (the few that came off) left Eduardo near-free in the 18-yard box. Rather than bring the ball down or even attempt to side-foot it, he volleyed it perfectly into the opposite top corner with the outside of his left foot. That decision and the finish still make no sense, yet they led to him scoring one of the best goals of the Wenger era.

The season that followed was more sad than anything else. Arsenal had switched to 4-3-3, and his inability to play as a lone striker in such a system meant he was shunted to the wings, for which he was neither fast nor creative enough. He struggled for fitness, and his confidence took an understandable hit. He was unrecognisable in front of goal from his 2008 self. The most notable incident of his final season at Arsenal was the overblown controversy surrounding his dive in the Champions League qualifier against Celtic. He went over under minimal contact in the area and won a penalty this one time. There really was very little to it.

He left for Shakhtar Donetsk in the summer of 2010. It was one of the sadder partings in recent Arsenal times. Eduardo himself may justifiably have felt that he was never really given the chances he needed, in a role to which he was better-suited, following the break. Arsenal were committed to the new system; Eduardo’s time was done.

Arsenal and Shakhtar were drawn together in the 2010/11 Champions League group stage, and just as he had scored his side’s consolation goal against Arsenal before joining, he did the same afterwards. The Arsenal fans cheered as if they had added a sixth, rather than conceded their first. Eduardo ambled back to the centre circle without celebrating, but a visible hint of a tear in his eye. The feeling was shared across the stadium.

Eduardo was and still is loved by many Arsenal fans, but it can be best summed up by saying that the rue lies with the fact that he had to leave, rather than the fact he did. In the words of Belle and Sebastian: It Could Have Been a Brilliant Career.