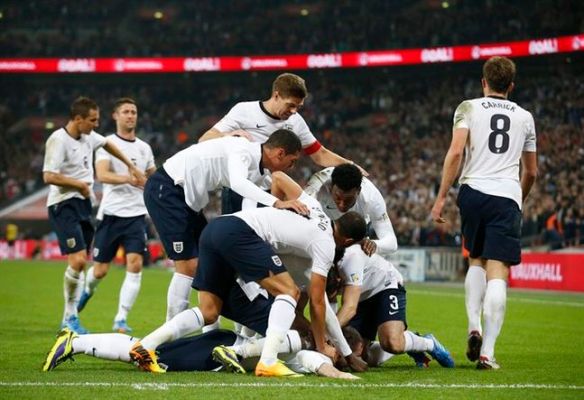 After a painstaking 13-month journey through dire stalemates, comprehensive beatings of European minnows and the overriding sense of ‘perpetual crisis’ England have reached the World Cup finals. A World Cup in Brazil without England would have been unthinkable, for Hodgson now this is his self-annointed ‘Utopia'; this has been the driving-force of his nomadic 38-year career, just reward for sheer persistence. What relief to have narrowly sidestepped the screaming vortex that has humiliated his predecessors, among them Graham Taylor, Kevin Keegan and Steve McClaren.

Should two positive results and emphatic performances in the space of a week excuse what came before? Should the previous recriminations be forgotten now that England have handsomely defeated two international sides that they would be disappointed not to beat? After all, England traditionally struggle against the so-called ‘mid-table’ international stratum.

As early as November last year Hodgson had already set his sights on the play-offs, despite a group that was so eminently winnable from the outset. Thus only from the lowering of expectations (a classic Hodgson manoeuvre and one that David Moyes is replicating at Manchester United this season) has this arduous qualifying campaign been quantified as a success.

It’s neither revisionism nor ‘the benefit of hindsight’ to suggest that England should have won this group more easily and earlier than they did. Where McClaren failed in qualification for Euro 2008, he was defeated by two progressive sides in Russia and Croatia who prospered in Austria and Switzerland.

Ukraine are a team in transition with Andriy Yarmolenko and Yevhen Konoplyanka the shining beacons of hope in the post-Shevchenko world. Poland, despite the presence of the Borussia Dortmund duo Robert Lewandowski and Jakub Błaszczykowski have very little strength in depth, so too Montenegro who struggled to make an impact at Wembley with Mirko Vucinic injured.

England have been thoroughly below par during this 13-month qualification process, a combination of both injuries and tactics are responsible for this. To those who lament that ‘this is the England way’, overlook their blistering form en route to South Africa and the relative ease with which they negotiated passage to Euro 2012.

Of course Hodgson deserves applause for releasing the handbrake when it was most demanded and avoiding the purgatory of the play-offs, but it once again lends to the belief that he is a fundamentally reactive manager. Travails against Italy in Kiev were the consequence of a failure to react to Andrea Pirlo’s monopolisation of possession. The second half debacles in Poland and Montenegro, where England relinquished single goal leads and hung on for parity, were a product of Roy Hodgson’s inertia.

What is to stop this happening in Brazil next summer? Steamrollering such uninspired and underwhelming opposition as Poland and Montenegro is not an indicator of how Hodgson’s tactics are developing, as many insist it is, despite the intense pressure that surrounded his decisions in the buildup.

As he so tacitly admitted in the aftermath of the victory over Poland that he “died a thousand deaths every time Poland crossed the halfway line”, Hodgson is a manager overwhelmingly paralysed by fear. To suggest that his managerial ethos will drastically change after loosening the shackles that brought about this week of reckless footballing abandon is incongruous.

The dour draws against Ukraine, Poland and Montenegro earlier in the campaign have not yet been vindicated. If Hodgson reverts to type in the friendlies to come, and in Brazil next summer, it will have all been in vain.

Now that he has identified a front three in Danny Welbeck, Daniel Sturridge and Wayne Rooney with huge potential to make inroads next summer, he must place his faith in the riches that England possess in attack. He must play to England’s strengths. Andros Townsend may have enjoyed the best start to an England career since Shaun Wright-Phillips but there is healthy competition in the wide areas already, with Theo Walcott and Alex Oxlade-Chamberlain still to come back from injury, and Hodgson’s continuing curious fascination with Raheem Sterling’s stagnating career.

The biggest conundrum will be in central midfield, where the manager faces the tricky proposition of working out how best to balance the attacking elements. Steven Gerrard is a permanent fixture, but would work better alongside two others rather than just Michael Carrick, Frank Lampard or Jack Wilshere.

This past fortnight was seen as Hodgson’s defining moment as a manager, but in reality it is only just upon him. Qualifying for the World Cup is one thing, but it brings new and bolder challenges. How England prepare for and perform in Brazil will have more lasting implications for Hodgson, while the long-term state of the national side resonates all around him.