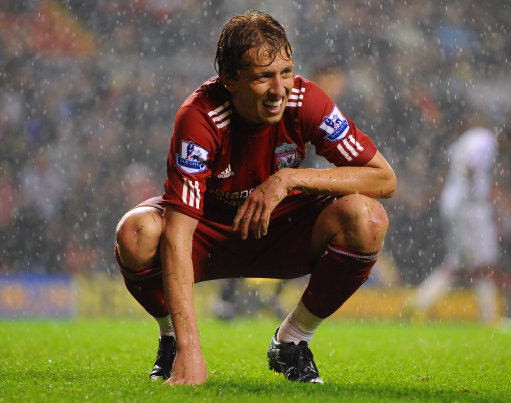 The Guardian journalist and The Anfield Wrap writer, Sachin Nakrani, looks back at the transformation of Lucas Leiva’s spell on Merseyside…

Lucas Leiva is not a footballer. Well he is, of course he is, but in the context of his career at Liverpool the 26-year old is more than that; he is a walking, talking metaphor for how dedication, belief, patience and talent can overcome a sense of perpetual doom. Watching Lucas now, it is hard to believe the boy from Dourados was once ridiculed and loathed in L4.

But he was, with the bulk of Liverpool supporters deeming the player Rafael Benitez had signed from Gremio for £5m in May 2007 not only unworthy of the red shirt but also a charlatan for daring to put it on in the first place. There was genuine scorn in the barracking, with a nadir reached on a brisk evening at Goodison Park in February 2009 when Lucas was sent off for two bookable offences in an FA Cup fourth-round replay against a team that took almost crazed satisfaction from their eventual 1-0 victory. The tie was goalless when Lucas was dismissed and the sense from the away end was that this hopeless prat had cost the side. Boos rang out, foul-language spilled into the winter air and continued some time after the player had departed down the tunnel. It seemed then that he had no way back.

But fast forward a little over four years and Lucas is now a mainstay of the first-team, a potential captain in the making and a player all fans are hoping has recovered sufficiently from injuries to play a large number of fixtures this coming season. Some of those fans will claim they never booed Lucas, insist they always had faith in him. Most of them are liars.

The fundamental problems for Lucas upon his arrival at Anfield were of perception and perspective. He was Brazilian yet looked nothing of the sort – there was no golden tan or obvious tricks. Instead we had in front of us a pale, goofy-looking defensive midfielder (a Brazilian defensive midfielder?!) with a girl’s hair cut and about as much flair as Marmite on toast. Then there the competition – at that time Liverpool had the “best midfield in the world” and it seemed close to ludicrous that this guy nobody had heard of would compete for a starting place with Steven Gerrard, Xabi Alonso, Javier Mascherano and Momo Sissoko. Whenever he did get in front of them, or merely replaced any of the four as a substitute, there was a collective drooping of shoulders in the Kop. A Ferrari had been parked and here came the Vauxhall Corsa.

What was forgotten among those early doubters (of whom I admit to belonging) was that here was not only a new signing but also a 20-year-old man who had just left his homeland for good. As Lucas himself said:

“The move to Liverpool represented a change of country and language, and there was also the not so small detail that I was only 20 and arriving at a traditional club in one of the most demanding leagues in the world. Also, few people seemed to remember Liverpool had a group of players that had made two of the last three Champions League finals. Maybe the supporters thought a Brazilian midfielder would do magic.”

There was undoubtedly magic in those boots but another problem Lucas faced upon joining Liverpool was Benitez’s desire to deploy him as a defensive midfielder. At Gremio, whom Lucas had first played for in October 2005, the player was allowed to drive into the opposition’s half of the pitch, get beyond the strikers and shoot on sight. His was an all-action manner of performance and such was its success that in 2006, having helped Gremio get promoted from Brasileirão Série B and then finished third in Série A, Lucas became the youngest ever recipient of Placar magazine’s Bola de Ouro, an award bestowed on the country’s best player and previously won by the likes of Zico, Careca, Romario and Kaka. Yet here he was, a young man in a foreign country having to play in a foreign way. Struggling to adapt and shine was an inevitability “The transition took time and made settling in even more challenging,” as Lucas himself put it.

But Liverpool’s No21 did not run away from the challenge and, somewhat paradoxically, his fortunes improved as the club’s took a nosedive. The departures in consecutive summers of Alonso and Mascherano, allied to the club’s inability to finance deals for top-level replacements due to the increasingly toxic ownership of Hicks and Gillett, left Benitez and then Roy Hodgson with little choice but to put their faith in the player. In the 2009/10 season Lucas made 50 appearances for the side, with only Pepe Reina (52), Jamie Carragher and Dirk Kuyt (both 53) playing more times. The run of games saw Lucas grow in stature and that same season, one of mounting frustration and hardship for the club, he became the fourth most prolific tackler in the Premier League. 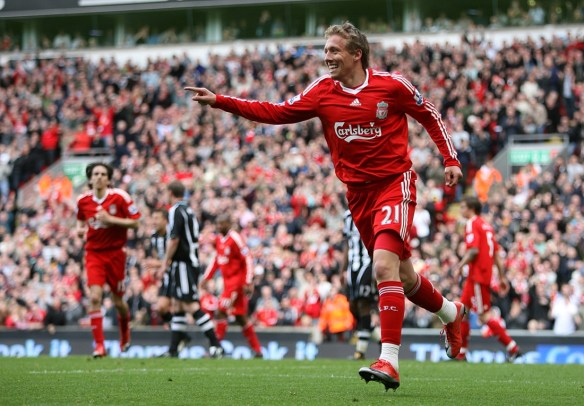 The following season, 2010/11, finished with Lucas being named the club’s player of the season and during the next campaign he appeared to have reached another level only to be stopped in his tracks by an anterior cruciate ligament injury suffered away to Chelsea in a Carling Cup tie in November 2011.

That season-ending moment immediately felt like a disaster for the team, particularly given it had come just two days after Lucas had put in a display brimming with maturity and bravery in a 1-1 draw with Manchester City at Anfield. Up against Yaya Toure, then reaching the peak of his powers for the soon-to-be-champions, Lucas was boss. Without him Liverpool lost 11 out of their remaining 19 league games, and while that horrendous run cannot solely be put down to the midfielder’s absence, there was an undoubted link.
Hard work over the summer saw Lucas return to first-team action last season only for a thigh injury sustained during the warm-up for another visit from City on 26th August 2012  to put the player out of action for another lengthy spell. He eventually returned at the start of December and now, injury free, continues to search for the form that made him a vital part of the team.

Whether Lucas reaches those heights again or not he will be able to look back on his time at Liverpool with immense satisfaction. Few players have achieved so much personally by givjng so much for the team. He went from clown to collosus in a handful of years and could well remain an asset for some time to come. The boy from southern Brazil may not be a superstar but, for sure, he is an inspiration.