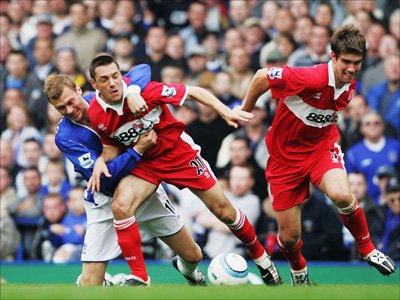 Dorival Guidoni Jr, or more magnificently plain old Dave, as he was known on Teesside, arrived on these shores in his early 30s and with a decent career in Spain and Italy behind him. He’d been in the 1998 Brazil World Cup squad so obviously had no little amount of ability and was used to seeing fat lads having a fit, so he was instantly at home on Teesside when he signed for Middlesbrough. But when it came to playing football the most you could really say about Dave was that, well, he was there. Neither very defensive and combative nor especially creative, its hard to recall what Dave actually did on the pitch other than run around with the undemonstrative hair cut of a proper man. But this was enough for Steve McClaren to give him a contract and because Dave was a starter in Boro’s League Cup Final winning team in 2004 he will always be a Teesside legend.

He was often called a model professional, which on Teesside merely meant you could be relied upon to turn up for training with a relatively low blood alcohol level and not get photographed with a lady sitting on your face outside of a night club. Dave wasn’t a moaner or a skiver, he was a hard worker and signed autographs for small children with good grace. What more could anyone want? Eventually he was usurped by the likes of Stewart Downing and Lee Cattermole so you have to wonder if Dave wasn’t well past his best by the time he arrived on the Costa Del Boro. After leaving the club he gave up the game altogether, at first fearing he had a dodgy heart but then realising this was merely the typical burning lungs sensation brought on by breathing air on Teesside.

Good old Dave. He was definitely there. We think.