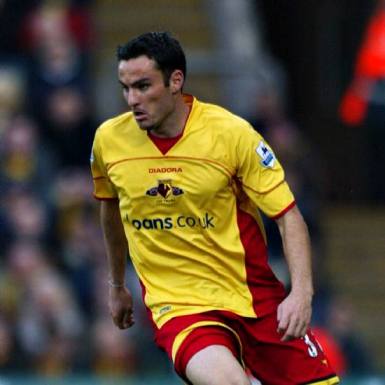 Douglas Rinaldi made just six league starts for Watford in an 18-month spell at Vicarage Road, and yet his brief Watford career won’t be forgotten in a hurry by many.

Signed at a time when Watford appeared to be tumbling out of the Premier League at the same pace with which they propelled themselves into it, manager Aidy Boothroyd went a bit mad on the final day of the January 2007 transfer window.

With earlier targets Will Hoskins and Lee Williamson secured for the future, Moses Ashikodi your typical Boothroyd punt, Steve Kabba secured to boost the local fast food economy, and Gareth Williams recruited as an adept ball-player in a long-ball team, Boothroyd made the exotic treble loan swoop of Johan Cavalli, Cedric Avinel and Rinaldi on January 31. Cavalli made just three appearances and now plays in Ajaccio, Avinel just the one appearance and now also plays in France with Clermont Foot and Rinaldi plies his trade for Esportivo in Brazil following the aforementioned six starts.

The other two are synonymous with Rinaldi, though it was the Brazilian who made the most impact in England by far, arriving to precisely zero fanfare, at a time when even the internet didn’t hold much in the way of information on unknown foreign imports.

Nowadays of course, every Tom, Dick and Harry scopes the internet for grainy video footage of an unknown player scoring a two-yard tap-in for his current club ahead of a move to their own side, declaring themselves an ‘expert’ of this ‘gem’ of a player.

Every club outside of the top six or eight in the Premier League takes gambles like these; players signed on the recommendations of agents that nobody has ever heard of and  the manager has only realistically seen on DVD, hoping they’ve unearthed the next Pele, but more often than not ending up with Ali Dia.

Rinaldi’s Watford career will be remembered not for the solitary league goal he scored in a 3-1 defeat at Blackburn Rovers, but for his mesmerising run and ever-so-nearly-composed-finish to match.

A stalemate against Jose Mourinho’s side was nearly broken with the Brazilian picking the ball up in midfield and slaloming through the Blues star-studded midfield and defence before losing his cool and blazing over. In the event, Salomon Kalou bagged an injury-time header to condemn the Hornets to a 1-0 defeat.

This way quite clearly, a player who had no little technical ability – what he was doing in a Boothroyd side, famed for their direct approach and physical nature, was never clear.

Unfortunately, Rinaldi’s ability on the ball clearly caught up with him, and despite signing on a permanent basis for £250,000 from Veranopolis that summer, he would feature just twice more – both League Cup fixtures – scoring a delicious free-kick in one of those.

Released in the summer of 2008, Rinaldi’s initial impact had already helped boost the ego of Boothroyd sufficiently enough to dip into the South American market once more the previous summer, signing Santiago Aloi on-loan from Argentine giants River Plate.