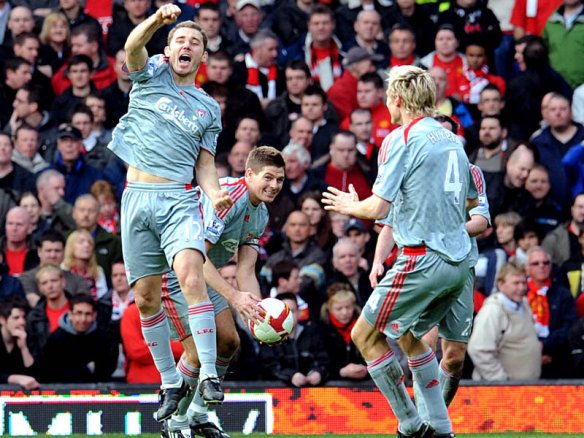 It wasn’t supposed to end this way.

It’s the first day of May and a pallid Liverpool side, preoccupied by an impending cup final and suffering the effects of a dreadful slump in form, gift Fulham an early goal at Anfield.
The game turns into the kind you’d barely notice if you passed it in a public park. For some reason I remember it being really cold, even though logic and a glimpse at the calendar tell me it can’t have been.

It was one of them.

Ordinarily I’d have long since forgotten the whole depressing experience, were it not for the night’s status as a minor landmark in the progressive dismantling of the last Liverpool team I truly believed, rather than hoped, was a great one.

Liverpool’s lineup that day was a half-and-half mix of regulars, Andy Carroll and lads we’d mostly forgotten about.

There was Maxi, looking clever. There was Dirk Kuyt, also clever, and working hard. And there, moving a bit awkwardly but swinging in inviting crosses for Carroll to stand and admire, was Fabio Aurelio.

From the moment he arrived at the club in 2006 it was clear Liverpool had a rare breed on their hands. Fab’s range of passing was as good as anyone at the club – Xabi Alonso included – while he also showed the concentration and positional sense of the finest full-backs.

He may not have been especially fleet of foot, but he knew how football worked. Most importantly of all, he knew how other footballers worked too.

An Aurelio pass or cross was a thing of beauty. Pundits will often say a delivery which evades everyone in the box would have been a good ball had someone gambled, or were someone taller or quicker to connect with it.

Aurelio seemed able to compute these intangibles, assess the possibilites, craft something bespoke every time.

His best season coincided with his longest run of fitness at Liverpool, and with the club’s most credible title challenge since 1991. In 2008/09 Fab was simply incredible, the best and most productive left-back in the league by a distance when available. 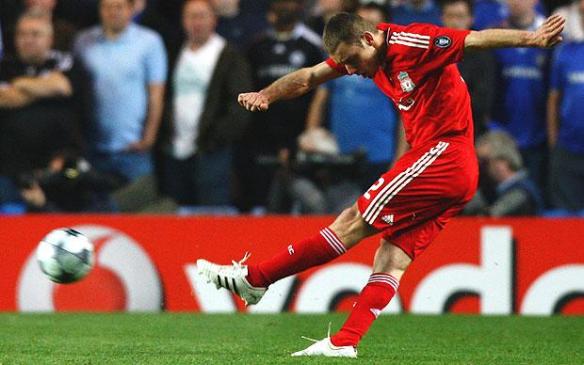 His free-kick against Chelsea in the second leg of the Champions League semi-final was jaw-dropping, his falling-leaf effort at Old Trafford a masterpiece of timing and execution, but perhaps his finest hour was at Fratton Park in February.

On a night when almost all the media-stoked fury some fans directed at Liverpool’s most successful manager in decades came viciously to a head, Aurelio’s deployment in the centre of the midfield was used against Rafa Benitez before, during and after one of the most thrilling wins in the club’s Premier League history. Here’s one of the more openly snide examples.

Yet, while not exactly running the game, Aurelio did a fine job in a match Liverpool dominated for an hour, drilling in the first equaliser from an indirect free-kick and providing calm assurance rather than head-down panic even as the minutes slipped by towards the end of the game.

That calmness, that authority, hinted at the player Fabio Aurelio could have been, were his body ever to allow it.

In truth, the real end had come a long time before the Fulham game, sadly at what may have been the high watermark of Kenny Dalglish’s second spell in the Anfield dugout.

Drafted in after three games out injured, Aurelio started the 2010/11 home meeting with Manchester United at left-back. It was a show of faith from the manager, who clearly liked the Brazilian’s style but had used him mostly in midfield up until that point.

That day, seeing Liverpool’s number 6 (the number’s still vacant – I like to imagine it’s been retired*) float across the turf, it was possible to imagine fresh starts, renewed promise, the prospect of that huge talent finally being fulfilled.

It wasn’t to be. Aurelio came off injured after 25 minutes and never fully re-emerged as a Liverpool player. By the time he left last summer, having survived managerial changes, been re-signed by Roy Hodgson after his contract had expired, few could sensibly have argued with the decision. I argued with it.

Fabio Aurelio was as pure a footballer as English football has seen, with a left foot you could build your life around. Yet on that first day of May in 2012 it was a previous left-back, now playing for Fulham, who provoked rare moments of consciousness from the crowd. Meat and potatoes full-back John Arne Riise was cheered, sung for, generally treated as a prodigal son. Fabio Aurelio got polite applause on being replaced by enthusiasm’s Jose Enrique on 65 minutes.

Every element of those last three sentences could make me weep. He was too good for this world. He’s back in Brazil now, his hamstrings and ligaments as ever the toughest opponents of all. But his time in English football will always be special to those of us for whom the word ‘heart’ applies to the game in its romantic rather than its pugilistic sense.

*Steve wrote this before Luis Alberto was handed the no. 6 shirt. Rumours are that he’s grudgingly accepted that “life goes on.”