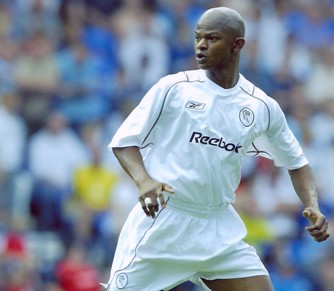 Chris Manning of Lion of Vienna Suite profiles the third and final Brazilian to have played in the Premier League for Bolton: Júlio César…

Júlio César’s early career is defined by his work in Spain, where as a youngster he was signed by Real Madrid and made 21 appearances in a two year spell, playing alongside giants of the game such as Hierro and Raul, as well as future Bolton Wanderers colleague Ivan Campo. Julio Cesar spent early 2000 being loaned to Italian side AC Milan.

Cesar’s nomadic existence then saw him move to Benfica and Austria Vienna before being sold to Bolton in July 2004. He made his debut in the first home game of the season – a sunny August day which saw two Jay-Jay Okocha goals help Cesar’s new side to a 4-1 victory over Charlton Athletic. However, the arrival of fellow defender Radhi Jaidi from Tunisian side Esperance saw his playing time limited to minor Cup games, including the two games against Yeovil Town where a reserve Bolton Wanderers side struggled to progress. It was against Yeovil Town where Julio Cesar scored his only goal in English football. It is difficult to assess his Bolton Wanderers career as it contains few notable moments, other than the absence of such events.

The rest of his time at Bolton was played out in similar circumstances, with injury and the form of other fellow defenders limiting Julio Cesar to just a handful of appearances before being released in order to sign for Mexican side Tigres where he became a key member of their domestic and continental successes. It was following his release from Tigres in 2006 that Cesar again set out on his travels, spending no more than a single season at clubs such as Dinamo Bucharest, Maritimo and Sporting Kansas City before winding up his playing days at Toronto FC. Canada was to be the last stop in a varied career that saw Julio Cesar play for clubs across the globe in countries such as Honduras, Spain, England, Austria, Italy, Portugal, Mexico, Greece, Romania, Turkey and latterly the United States and Canada.

A strange footnote exists on Cesar’s time at Bolton. During the 2006 investigation into corruption in English football, Lord Stevens compiled a report which put forward 17 transfer deals that were subject to further scrutiny. One of these was Julio Cesar’s. It appeared Sam Allardyce and his son Craig had taken ‘bungs’ off agents for signing certain players. Stevens stated: “The inquiry remains concerned at the conflict of interest that it believes existed between Craig Allardyce, his father Sam Allardyce – the then manager at Bolton – and the club itself.”

One thought on “The Other Júlio César: from the Bernabeu to Bolton”