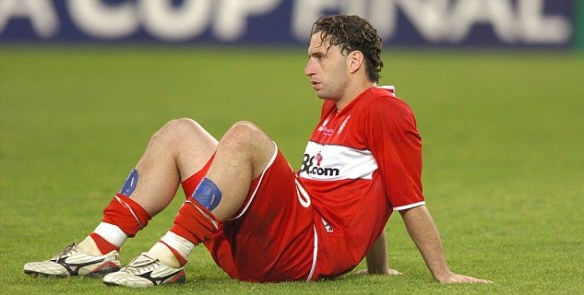 He was an oblong-faced, slab of Brazilian meat who didn’t play Samba Football; Rocky doing the Samba would surely look like a builder eating chips while falling off some scaffolding. Initially he struggled and was not always a popular inclusion in the team – chants of ‘sendimback’ were not uncommon, especially with those fans who liked to conflate words, but eventually, towards the end of his tenure, he became some kind of hero. He brought comedy value, at times clumsy and a bit useless, but also capable of being a highly creative midfield presence who, when he had the right feet on, was part of the best bloody team Boro ever had.

Maybe his greatest game was against Basel in home leg of the Quarter Final of the UEFA cup when he was the a physical and creative power house that drove Boro on to a remarkable four goal deficit overhaul the like of which no Boro fan will ever see again.  It was his long range shot that, in the 90th minute, was parried out by the keeper into the path of Massimo Maccarone to score the winning fourth goal. These were gold dust days of sheer goddamn, nostril-flaring rock ‘n’ roll glory. For perhaps all too brief a time Fabio Rochemback was a Teesside hero but that, my friends, is really something to be.