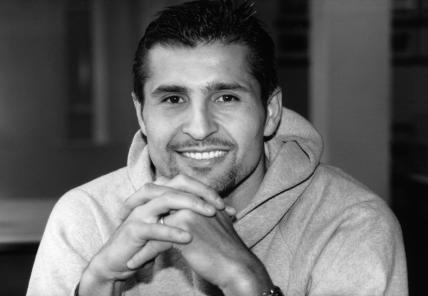 Amassing 152 top flight appearances for four different clubs, Emerson Thome can be described as the first Brazilian journeyman on these shores. In a bumper edition of ‘The Samba Series’, we pay tribute… 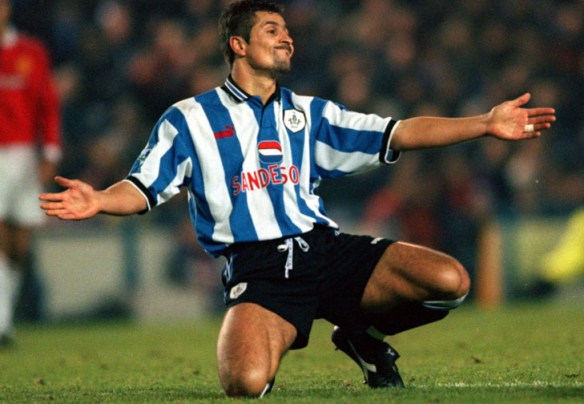 When your club is building what you truly believe is a League winning side and you get wind that you’re signing a Brazilian player, any doubts you may have had turn to childish giddiness. Your mind races with thoughts of fancy footwork and legs like bees wings moving faster than the speed of sound, so a few days later when you find out the nickname for your new super smooth play maker is ‘The Wall’ those doubts resurface…

As wonderful as all their players over the decades have been, you struggle to think of an earth shattering defender, especially centre half and ‘The Wall’ quickly erases any thoughts of dancing feet.

When you finally see your ‘Brazilian Master’ and see that he’s 18 feet tall and 6 foot across the shoulders you instantly get the nickname. 18 feet tall maybe, but tanned, goateed and gorgeous he was and the ladies of Sheffield soon took an instant liking to him. For the blokes it was gonna take more than rugged good looks to persuade them… Show us what you’ve got!

In the grand tradition of Wednesday centre halves, continuing to this day, it was customary to make at least one mistake per game, possibly two and Emerson was always ready to fulfil his obligations, at times like a dog on lino yet at others living up to his billing as ‘The Wall’ many of us believed you could aim the ball directly at his plums and he wouldn’t flinch.

Just what Northern blokes want to see, ‘You’ll do cocker!’

ET was at the heart of the Wednesday defence when we had a mixed bag of high earning individuals. The likes of Wim Jonk and Gilles De Bilde had arrived with huge reputations on the back of their involvement in the World Cup and did little to live up to expectations, other than collect their large bag of swag. Ironically, it was the obscurer Thome who became a fans favourite. Unlike those ‘better players’, he was held in high regard and with a lot of affection to this day.

I hated Chelsea for, amongst many other things, stealing yet another of our players, (having stolen Dan Petrescu a few years prior) even if we did need the cash because we were clearing out before the inevitable drop. It broke my heart when he left, not because I had a man crush on the great muscled behemoth, which I clearly did, but being a Yorkshireman it was far worse than that, it hurt my pocket. He went to Chelsea the day after I bought my eldest an Emerson Thome T-Shirt for Christmas. By the time she opened it he was already playing for them. He broke my heart and ruined Christmas for us all. I don’t blame him of course, I blame Chelsea…I ALWAYS blame Chelsea.

I like to believe that very shortly afterwards when he played against us for Chelsea and clearly believing he still had Wednesday obligations, he made a hell of a rick in the heart of the Chelsea defence allowing us to score and in the mind of every single Wednesday fan watching that day, he gave a knowing wink and a wry smile.

Thome played more games for Wednesday than any other club in his career and to Owls fans he’ll always be seen as a Wednesday player first and in our soft and milky, misty eyed world, we hope he sees things the same way. 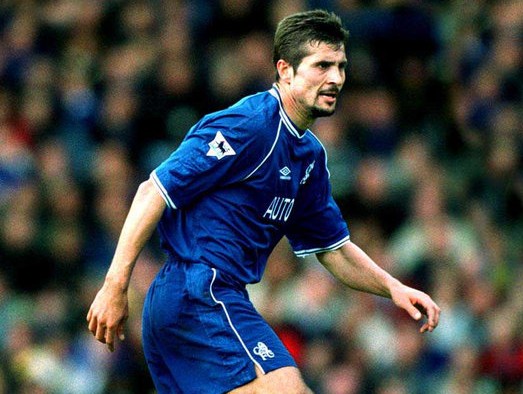 The Brazil team of the late 90s was something rather magical for the football purist. Indeed, for a twelve-year-old they were the pinnacle of sport. The crop of world class talents at their disposal ranged from Ronaldo to Rivaldo, Ronaldinho to Denilson (the proper one, not the silly little Arsenal crab). This was the side that brought us arguably the greatest football advert ever, the Seleçao at the airport. They had players, like Roberto Carlos, who from a child’s perspective appeared to be able to score from anywhere within a 3-mile radius of the opposition net.

The connotations around any Brazilian footballer were that of fantasy, flair and undeniable skill. They played the game before a period where it became essential to categorise every iota of play on a football pitch. There were no deep lying forwards, inverted wingers or registas (there may well have been, but let me indulge my childhood). They were a team that played with a sense of style that Spain’s ‘pass you to death’ mentality could never obtain. With this in mind Chelsea’s signing of Emerson Thome was something that I recall being extremely excited about.

Thome was the first player that ever truly disappointed me. He was never a poor footballer, but the stigma attached to Brazil footballers around this time was certainly not that of the ‘no nonsense’ centre half. I had expected an exciting winger or tricky centre forward to help spearhead an assault on the title. As a young kid your sense of wonderment at the skill of overseas players is something that you invest a lot of time and energy in upholding.

While we witnessed the burgeoning career of perhaps the greatest striking talent in world football in Ronaldo, Chelsea had bought Brazil’s only centre-back (probably). Thome resembled an aggressive South American bouncer or henchmen. He also seemed to play like one for the majority of his time at Chelsea. He naturally found things quite difficult at the club with Marcel Desailly and Frank Leboeuf in his path, but he nevertheless was a reliable and steady player.

Sadly and perhaps infamously Thome was dumped by the club in favour of that stellar overseas import Winston Bogarde. Chelsea’s initial flirtation with the Samba scene had certainly left them feeling very little. 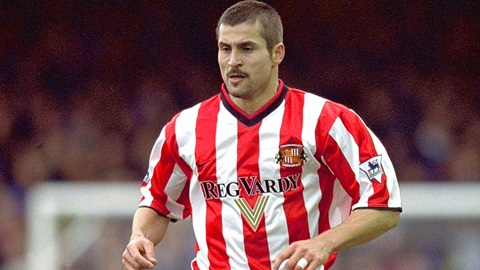 Pete Sixsmith of Salut! Sunderland gives his take on Thome’s exploits in the North East…

The cosmopolitan nature of the modern game means that provincial clubs like ours are more likely to sign a Dutchman than a Darlingtonian, a Spaniard than a Scot and a Brazilian rather than a Boltonian. In the past, Scotland was a happy hunting ground for Sunderland  but, over the last few years, we have had players from all over the world.

The two Brazilians who have worn the famous red and white stripes, are players who could best be described as jobbing professionals. Both were signed by Peter Reid and neither of them really left a great mark on Wearside.

Marcus di Giuseppe joined us in the autumn of 1999, played a single game away to Walsall in a second leg League Cup game and disappeared as quickly as he arrived. I never saw him play and his name is a recurring question in SAFC quizzes  – a question which very few seem to get right.

Emerson Thome played 44 games for Sunderland between September 2000 and February 2003. In that time he scored twice, both against teams from the West Midlands in Coventry City and Aston Villa and he did well enough at Sunderland.

He was part of the team that beat Newcastle United 2-1 at St James’ Park, a glorious day as Tommy Sorenson saved a penalty from Alan Shearer and was mightily impressive in that game as we held on for a famous victory.

In his first season, he played 30 games, but the numbers decreased and, when it looked like the club would have to pay Chelsea extra money when he passed 50 games, the appearances dried up altogether. Howard Wilkinson played him once in the ill-fated 19 point season and he left for Bolton Wanderers at the end of the campaign.

There are two things about Emerson that I remember. First of all, he took a young Argentinian called Julio Arca under his wing as they both signed on the same day. Arca was 19, away from home for the first time and Emerson looked after him until he found his feet.

Secondly, he had the finest physique I have seen on a Sunderland player. On a hot night in Algeciras in 2002, he was on the bench and took his training top off as it was so hot. His six pack was unbelievable – taut with not an ounce of fat on him. Quite magnificent. If only his passing had been the same! 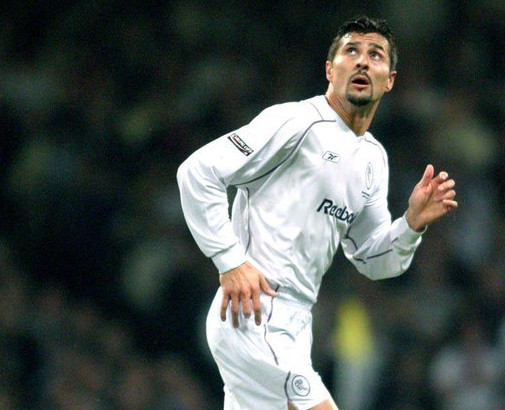 Emerson Thome’s time at Sunderland came to an unceremonious end when he was handed a free transfer which was deemed preferable to the club than the contract clause which stated that upon his 50th appearance a sizeable bonus was due to Chelsea. He joined Bolton Wanderers, who under manager Sam Allardyce were beginning to make inroads into the higher echelons of the Premier League despite their smaller status when compared to a lot of established English sides.

Thome soon established himself as a partner to Frenchman Bruno N’Gotty, who was signed by Allardyce from Marseille. That season Bolton Wanderers finished eighth in the Premier League which was an almost unheard-of success. They also managed to reach the final of the Carling Cup where they faced fellow Premier League outfit Middlesbrough, who had their own Brazilian contingent in midfielders Doriva and Juninho.

Bolton went into the game as slight favourites though this was shaken after seven minutes when the team found themselves two goals down. A goal by Joseph-Desire Job was followed by a contentious penalty awarded when Emerson Thome brought down the goalscorer Job. Despite a Kevin Davies goal on 21 minutes, Bolton were unable to rescue the game and went on to lose 2-1.

At the end of the season the club offered fresh terms to Thome but instead he chose to accept an offer from First Division Wigan Athletic, dropping to the lower league along with Bolton colleague Per Frandsen where he earned promotion to the Premier League the following season. Following his release from Wigan he joined Derby County on loan for a spell and then finishing his career in Japan with Vissel Kobe, retiring in 2007. Thome has been the Portuguese scout for Everton since 2008.

Emerson Thome’s career stretched 15 years and across the globe; starting in Brazil before finishing in Japan, via stints in Portugal and England in between. Including his spell at four top-flight English sides, Thome played in The Championship with Wigan Athletic in 2004-5, before a loan spell at Derby County the following season. He is the Brazilian Journeyman of English Football. Emerson Thome – we salute you.

One thought on “Emerson Thome – The Brazilian Journeyman”