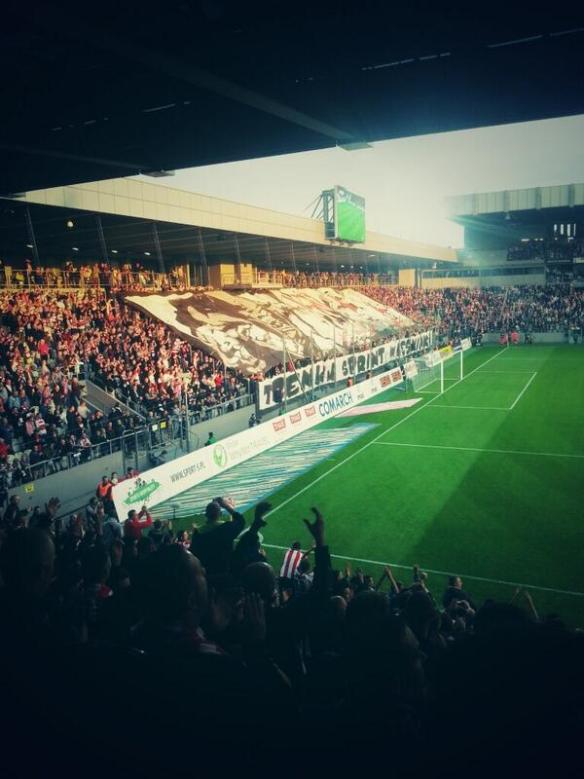 Despite Poland being occupied by both Nazi and Soviet forces during the Second World War, Krakow remained pretty much unscathed – legend has it the Pope wrote to Roosevelt, asking that he pressed Stalin to take extra special care of the holy city – and so its many grand buildings and monuments remain as beautiful today as they were when they were first built.

Yet wandering around the main square on Saturday afternoon, it was as though you were walking around a warzone; large groups marching through the city, chanting; casings of explosion-type fireworks and flares strewn across the floor; Polish flags attached to famous landmarks flying bravely and the remnants of symbols of the enemy, left charred and burning on the street.

The marching soldiers were Cracovia fans, massed at the command of to Ultras to march towards their stadium in a show of unity and support, the burning symbols scarves of their most hated enemy, Wisla Krakow, and the bits in-between were vital components to ensure this derby had an atmosphere I’ll never forget.

Managing to shake off the hangover that had plagued me all morning, I met my Cracovia-supporting friend before walking down to the stadium together, safety in numbers very much the theme. Before leaving my apartment, I tried several ways to hide my red and white Cracovia scarf – in my sleeve, which only served to make my sweater arms baggy as hell, down my shorts, which gave me a very generous bulge, before settling on around my waist. Funny though it may seem, a grown man hiding a scarf, this was no joke – several fans have died as a result of this derby, so I was taking all possible measures to ensure I survived my first ever Ekstraklasa match.

After tagging along with other Cracovia fans on the walk to the stadium, we queued up to get in. Wherever you looked, there were swaves of police wearing full riot gear – visored helmets, body armour and truncheons longer than your forearm – a sight you’d think would make even the baldest, most tribal tattooed hooligan wince. Once passing through the barriers, it was a quick pat down by a steward then you were in, and ready to party. I thought I’d seen a Leeds United hat, blue and yellow striped, before learning it was actually an Arka Gdynia hat. You see, Cracovia form a third of the Wielka Triada, or Great Triad, an alliance between fans of Cracovia, Arka Gdynia and Lech Poznan, the latter two having made their way to the game to lend Cracovia a… helping hand, shall we say.

Despite having an allocated seat, expecting to sit in that particular one is a tad optimistic and, really not feeling up to raising a quandary with the large shouty bloke to my left, we opted to sit a few rows along. Immediately before kickoff, the club song played. Due to it being in Polish I couldn’t understand it at all yet made the appropriate mouth movements in a bid not to be “found out”. I later learned that the song references their opponents, promising never to “go over to the dogs”, an affectionate moniker for Wisla. As the teams kicked off, the stadium burst into life, and it was unlike anything I’d ever seen before. The home end to our left let off a multitude of flares, before unveiling a large tifo depicting an aggressive, armoured fan with an anti-Wisla image on his helmet, ready to wade into Wisla fans. The Wisla Krakow fans, tucked away in a corner to our right – and rather impressively all wearing dark blue – responded with banners and explosions of their own.

During the game, I actually felt the exact moment I became a fully-fledged Cracovia fan or, more to the point, a member of the anti-Wisla. Talented Wisla winger Małecki slapped his badge in our direction, further ranking up the heat in this pressure cooker of a stadium, before being met with both a tirade of verbal abuse and projectiles throughout the game, including coins, bangers and whatever else you can fit in your pocket.
That aside, the first half was pretty flat, with both teams enjoying decent possession in the middle of the park amidst the full-blooded challenges, before Wisla took the lead with the only chance of the half, a hammer blow to the home fans. The teams went in at the break, leaving the fans left to mull over what they’d just seen.

The second half got underway and Cracovia got on the front foot early on, roared on by the sell-out crowd and the best efforts of the chant orchestrator, a man with a microphone on a plinth, dictating what should be sung by the home faithful and backed by drummers. Cracovia were all over Wisla in the second half, and when a header was sent wide with twenty minutes to go I got a sense it wasn’t to be our day, until the breakthrough finally game.

After being played through by Burkina Faso’s Saidi, once-promising prospect Dawid Nowak made no mistake in rolling the ball past the goalkeeper, in a display of one-on-one poise that would make Inzaghi proud. 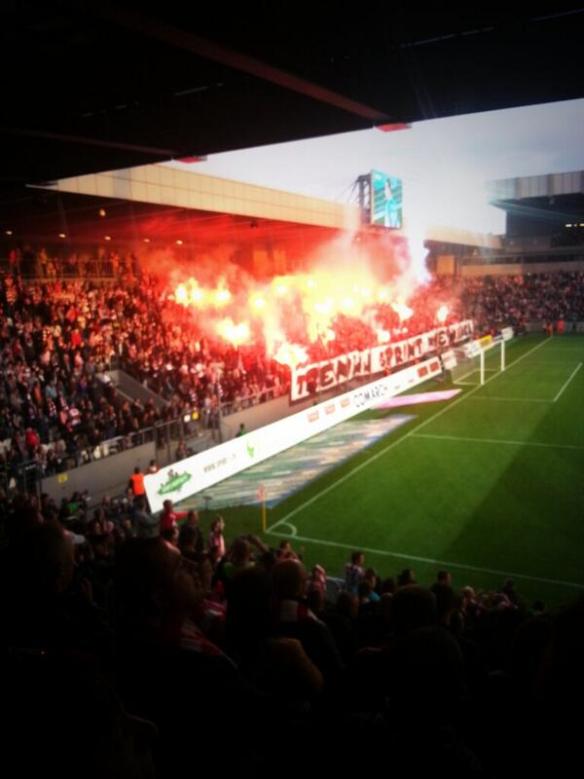 The noise was unlike any I’d seen before, except perhaps Elland Road after a late winner, with fans in the terrace going absolutely berserk, sent into delirium by Nowak’s trusty right boot. It could, and perhaps should have gotten even better, when Saidi had only the keeper to beat before fluffing his shot completely with mere minutes left on the clock. It was enough to make you disheartened when the final whistle blew, despite the notion that you’d have taken a draw beforehand given the recent form of both clubs, before acknowledging that anything other than a defeat to that lot was a good result.

As we made our way to the exits, the Cracovia players made their way over to the fans, applauding their efforts and leading the way in starting the chants – the sort of player-fan interaction that makes you forget all of football’s flaws for a moment or two. We were even treated to the sight of a Wisla fan ripped from his seat and beset upon by large riot police – probably the only square I had to tick off of my Eastern European Football Derby Bingo Sheet before I had a full house.

We made our way back to the centre, not before wrapping my scarf around my waist again, and reflected on what we’d just seen. The standard was decent, the atmosphere was better and I left the stadium a proud member of the Pasy, well and truly bitten by the Polish football bug.

Unfortunately, following the derby the powers that be have taken the ludicrous decision to close Cracovia’s stadium for two days, making Cracovia play their next two home games behind closed doors. By all accounts, it was one of the calmest derbies in memory, yet opposition to the ban seems futile. The official reason is because projectiles were thrown onto the playing field, despite never actually reaching the pitch.

One thought on “KS Cracovia: Life as a Member of the Pasy, Part Two”