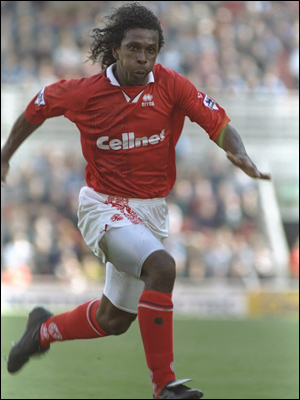 Signing a Brazilian footballer is always exciting. When that signing is a Brazilian midfield powerhouse, added to a team already boasting a silky Brazilian schemer and a World Cup winning defender, things get more exciting still.

So it’s fair to say that Middlesbrough fans were fairly delirious when Emerson jetted into Teesside in 1996 to join compatriots Juninho and Branco.

The mid 90s were probably the best time to make a foreign signing. Football had undergone its gentrification in the early part of the decade, which reached its nadir post Euro 96, and gave football stadiums up and down the land a decidely more continental, or at least cosmopolitan, feel. There was enough European football on TV to whet our appetite, but not enough to saturate.

It was a time before a fanbase could call up any given player’s career statistics at the touch of a button, before one internet message board dweller reveals that he can speak fluent Portuguese then painstakingly translates every tweet said player has ever sent.

It was also long before the time when a career could be chewed up and spat out on the back of one heavily edited YouTube clip.

So while excitement was the prevailing feeling when Emerson Moisés Costa stepped out for his debut at the Riverside in Willie Maddren’s testimonial match against Inter Milan, most didn’t quite know what to expect.

Well, that’s only half true. It was plain to see that such a strapping central midfielder would be physically dominant. Not short at 6ft tall, it was Emerson’s broad shoulders and broader backside – allied with his impressive soulglo hairdo – that gave the impression he wasn’t going to be messed with.

If genetic engineering ever gets far enough to build a perfect midfielder, you’d probably come up with something close to Emerson. Physique, close control, athleticism, a trick, measured short and long passing and an incredible rocket shot. He was also an excellent dancer, as his samba goal celebrations will tell you (check out YouTube).

He also started the season on fire, and for a moment many thought that the club could have (whisper it)  found an equal to Teesside demi-God, Juninho.

But where Juninho showed how big his heart was with ever-improving performances as Boro slid towards relegation in that crazy, cup final laden 96-97 season, Emerson seemed to wilt.

The £4.5m signing from Bobby Robson’s Porto went AWOL – both in the body, back to Brazil, and in the heart.

After he had already left for Boro, Bobby Robson moved to Barcelona. He told the Catalan board ‘get me Emerson’.

While in today’s footballing landscape it is unbelievable to think that little old Middlesbrough could turn down one of world football’s biggest institutions – they did, rejecting a £6m bid.

And while Emerson showed flashes of his huge potential throughout the season and also for a few months of Middlesbrough’s first year back in Division One, he never quite reached those early season heights again.

He will always be remembered at Middlesbrough for two trademark goals against rivals Sunderland. In the Premiership, and at the last ever Tees-Wear derby at Roker Park, he hit one that kept on rising and gave the goalkeeper absolutely no chance.

And after both clubs were relegated, he did the same again on Boro’s first visit to the Stadium of Light, smashing an unstoppable drive that would have ended up back on Teesside has the net not got in the way of it.

Looking at him through the prism of fandom, it doesn’t seem too ridiculous to say that Emerson could easily have been a world superstar. He did have everything needed to be the complete player, apart from, it seems, the required mental application.

The journeyman nature of his later career, the lack of international recognition, and scant medal haul seem to confirm this too. But for a short while, Emerson was as good as it gets.

One thought on “Emerson: Failed Brazilian Promise on Teesside”